LOS ANGELES (CNN) - Wherever superhero creator Stan Lee goes, a crowd of comic book fans seems to gather, but now Lee's making it official with his own comic convention.

"Stan Lee's Comikaze Expo Presented by POW! Entertainment" launches in Los Angeles in September and is expected to spread with shows around the world, according to Lee and his "partner in crime" Regina Carpinelli.

Carpinelli grew up as a big fan of Lee's many superhero characters, including Spider-Man and other Marvel Comics fixtures such as the X-Men, Thor and Iron Man.

Having Lee's name on the marquis and his POW! Entertainment helping with promotion is "making history," said Carpinelli, who compared the former Marvel Comics chief to Walt Disney, Einstein and Shakespeare. "What more can a convention want; this is magic we're making here."

"Despite my legendary shyness, I thought that would be a great idea," Lee said.

Grown men have been seen crying after shaking hands with Lee at comic book shows.

"I have that firm grip," Lee said. "I squeeze their hand so hard, what are they going to do?"

END_OF_DOCUMENT_TOKEN_TO_BE_REPLACED 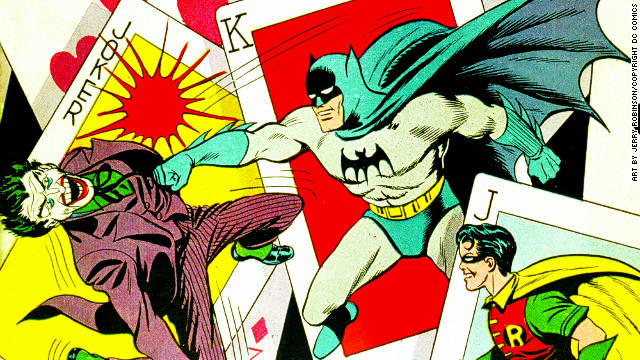 Cartoonist Jerry Robinson, who worked on the earliest Batman comics and claimed credit for creating the super-villian The Joker, died Thursday at the age of 89, his family confirmed.

Robinson, in a panel discussion at New York Comic Con in 2009, said he was a 17-year-old creative writing student at Columbia University when he was hired as a writer and illustrator at DC Comics.

Although he was initially just assisting Batman creator Bob Kane and Bill Finger, his chance to create The Joker came in 1940 when the demand for more Batman stories overloaded Finger.

"This was going to be a problem, so I volunteered to do one of the stories," Robinson said.

He handed in the work for a grade in his college creative writing class, he said.

"I wanted a very strong villain because I thought that's going to carry the story," Robinson said. "Villains are more exciting."