In the company of (dead) presidents

While the mock Civil War troops camped outside the grand porch of a large house in Mentor, Ohio, on a chilly February day, a bearded man captured their attention.

"The president's here!" said the captain, as the figure of James A. Garfield made an impromptu check of the soldiers. The next day the story of the chance inspection was in the paper, and the dignified gentleman's telephone was ringing off the hook.

Thus began Ed Haney’s journey as a presidential re-enactor. It was quite fortuitous he grew that beard.

Haney has been portraying President Garfield for 25 years now. He is a living historian, and began his presidential journey as a favor to the curator of the James A. Garfield National Historic Site, the museum housed in the preserved home of the 20th US president. He studied up on the president, grew a beard, rented a costume and portrayed the assassinated leader for a fundraiser organized to help fix up the house Garfield lived in from 1876-1881.

Living historians are "dedicated to the preservation of history through correct presentations of life and the preservation of our country's landmarks, cemeteries, and battlefields," according to the National Society of Living Historians. They often participate in Revolutionary and Civil War reenactments or work in living museums such as Old Fort Niagara in New York or Colonial Williamsburg in Virginia.

Haney's fateful turn as Garfield developed into an interest he couldn't shake. "The more I started reading about him, the more I was fascinated by him," he said. Newly retired, Haney joined the museum in a more substantial way as a tour guide (in the guise of Garfield) and began collecting Garfield memorabilia. (His spare room is filled with Garfield mementos, including a 38-star US flag, the type that flew while Garfield was in office.)

Haney's enthusiasm for Garfield ultimately led him away from the museum to organize a troupe of like-minded re-enactors that call themselves We Made History.

Being a living historian can be a hobby or a career: Haney and his friends work as independent contractors, scheduling educational appearances at museums, schools and civic clubs. They earn money for their portrayals, but don't depend on their fees to make a living. While some living historians choose to recreate a persona based on their own personal family history or invent a character from the past, Haney's group chose very specific and recognizable figures from American history to bring to life.

END_OF_DOCUMENT_TOKEN_TO_BE_REPLACED

Be the pun: Delight in your cleverness this Halloween

Puns make a lot of people groan. But not me, I love them.

And when I dress up for Halloween at the office, I pun it up.

Halloween is a day which makes adopting a different character or persona completely socially acceptable. With that kind of freedom, wouldn't you want to be someone or something devilishly clever, at the very least?

On October 31, as I cross Centennial Park Boulevard in Atlanta, Georgia, and head into the CNN headquarters, I'll have the same excited grin on my face as I always have on Halloween. I'll be exceedingly pleased and proud of the punny costume I dreamed up and put together - this year I'll go as Hell-o Kitty - and I'll barely hold back my enthusiasm when people ask what I am.

Simultaneously, I'll temper my squee with the understanding of what lies ahead: The inevitable "huh?" and "I don't get it."

One year I was particularly happy with how I'd executed the pun of a small Orange Julius. I created a Roman soldier's tunic and lappets and wore a laurel wreath crown, all in shades of orange. And I'm short, so I loved that effectively I was a mini-sized Julius Caesar. The perfect rendition of a small Orange Julius! But the majority of my coworkers guessed I was Pocahontas.

Last year I went as pumpkin pi. I created a poofy orange dress and wore a green fez (which functioned as a stem) that were covered in mathematical equations which solved pi. I even put a joke one on there: ∏≠r2  Get it? Pie are round, not square. Once again, I stumped the journalists of CNN.com. I didn't think it was that subtle.

Even my simplest costume - a witch hat, lab coat and prescription pad - left a few coworkers scratching their head. And how obvious is that one? END_OF_DOCUMENT_TOKEN_TO_BE_REPLACED

In other words, they’re nerds. And that’s what made them great. END_OF_DOCUMENT_TOKEN_TO_BE_REPLACED 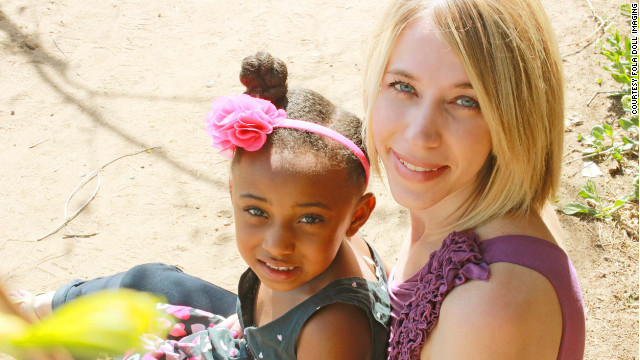 My view: The joys and challenges of raising a gifted child

Editor's note: We here at Geek Out! found this perspective on gifted children from our colleagues at "Schools of Thought" quite interesting. Do you identify with the struggles of being gifted and having parents who are not always prepared for the realities of a high IQ? Chandra Moseley is a working, single mom. A resident of a Colorado city, she makes sure to expose her gifted daughter to small-town living through weekly trips to the Rocky Mountains.

My daughter, who is 5, was identified last year as "gifted.” Well, I honestly had never properly understood what being "gifted" meant. I naively thought, "Oh, my baby is so advanced, she is just so smart!”

For those of you who are truly unaware of what being gifted means, let me help you understand.

Gifted students are defined by the National Association for Gifted Children (NAGC) as those who demonstrate outstanding levels of aptitude or competence in one or more domains.

The part of the definition that’s missing – and what I so desperately needed to understand – is the social and behavioral issues that may come with giftedness.

For one thing, my daughter, Nya, is a perfectionist. She gets frustrated even if she only slightly draws outside of the lines. She also gets unnerved by certain loud noises (buzzing or toilets flushing) and even the seams on her socks.  I’ve had to turn her socks inside out because the seam on her toes irritated her so much. I thought she was just being fussy.

I became aware of Nya’s giftedness through Rev. Regina Groff, a family member’s minister, who noticed the way Nya was coloring when she was just 2. Rev. Groff has gifted children of her own and recognized Nya's frustration each time she drew outside of the lines. That type of frustration and overexcelling is all part of the perfectionism characteristic of being gifted. Just that simple act of frustration revealed her giftedness at the right time that day.

There are other characteristics of giftedness that for many, including my daughter, are telltale signs – excessive energy, unending curiosity, emotionally advanced, early and superior language skills or a need for perfectionism. Gifted children might have supersensitivities, and that’s what was going on with the loud noises and her socks.