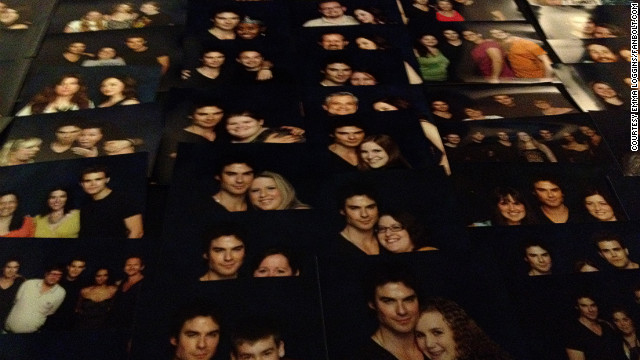 At one point there were more than 40 fans in line for "Torchwood" star John Barrowman, who was charging $55 dollars for a signed picture, with a consistently long queue of fans waiting for him throughout the weekend. It's not hard to do the math.

Is the experience worth a fan's hard-earned money? It was for Tom Gardiner, who had a great experience getting autographs from John Barrowman for his daughters Emily and Hannah.

"It was definitely worth it," Gardiner said. "John took time to interact with each of his fans, and he didn't have to do that."

"X-Files" fans were in heaven after having a chance to meet Gillian Anderson. The conspiracy-focused sci-fi series may have ended a decade ago, but it's still a fan favorite. Anderson's was one of the more expensive autographs this year: She charged $60 dollars for an autograph and an additional $20 dollars if a fan wanted a personalized note. I'm guessing at least one fan had her sign a headshot with, "I want to believe."

Caroline McCormic had nothing but good things to say about her experience with the Walk of Fame, even though she admitted it can get rather pricey for fans.

"It is very convenient to have all the stars in one place. If a celebrity doesn't have many people in line, you can often have a fun conversation with them. This is basically the only opportunity for any interaction," McCormic explained. "It is where I spent the majority of my time at Dragon*Con, and I would definitely recommend it – just bring plenty of cash!"

Celebrities didn't want to discuss with me how much cash they make from these events, and it turns out Dragon*Con organizers can't be sure, either. However, Walk of Fame director and 11 year Dragon*Con vet, John Hancock, (yes, the director of the event where celebrities hand out autographs is actually named John Hancock) knows the celebrities sign an impressive number of autographs throughout the convention.

"I wouldn't begin to know how many thousands of autographs they sign. Some of them literally sit there and sign for hours on end, while some don't have quite the huge line," Hancock said. "In all honesty, I wouldn't feel that I'm exaggerating to say there are probably a million signatures exchanging hands during Dragon*Con!"

With the demand for autographs continuing to grow each year as the convention brings in more attendees and bigger celebrities, the prices for photos and autographs have grown as well.

"When I started at Dragon*Con it seemed everyone was charging $20 dollars for an autograph. Over the years I've seen the prices get higher. I've seen some charge $65-$70 dollars, I've seen some that do combo deals for a picture and autograph for $200 dollars," Hancock explained. "At this point I'd say the average cost for an autograph is $45 dollars maybe. Most stick around the $30-$40 dollar range."

Money aside, the experiences that fans have in these brief moments with their favorite stars are moments that they carry with them for a lifetime. Can you really put a price on that?

Ildar Prime didn't think so. His favorite Walk of Fame story didn't even involve him, but he still enjoyed witnessing the awkward moment one fan had with actress Felicia Day.

"My favorite story is when this guy met Felicia Day and just froze, couldn't say a word for few minutes. She eventually saw he was wearing a World of Warcraft shirt, and being a fan complimented his shirt. All he could say in response was '...I like yours too.' Felicia, wearing a plain green shirt, awkwardly laughed and said 'and it's now creepy.' " Prime recalled. "It was hilarious and everyone just laughed it off."

Being a fan isn't cheap. Collecting autographs, photos, and other memorabilia can quickly deplete a checking account at conventions like this. However, at the end of Dragon*Con, fans seem to be thinking about next year and doing it all over again. These experiences are priceless to them.

Have you visited Dragon*Con's Walk of Fame? Stood in long lines for autographs and photos at other conventions? Share your stories with us!