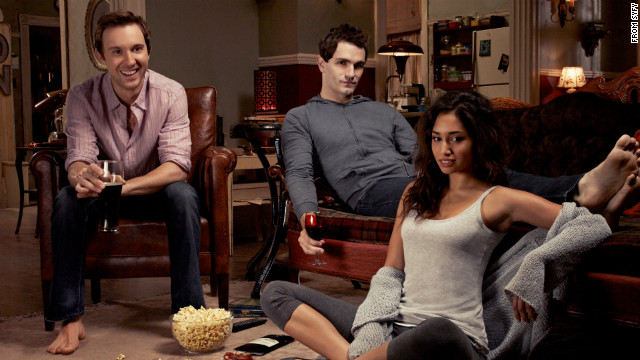 After writing about pop culture for a while, attending a dozen San Diego Comic-Cons and observing – as well as being a part of – fan culture, you start to notice the signs of a growing movement.

Comic-Con has always been a litmus test for pop culture's appeal. How the hordes of attending fans react to the convention's exclusive presentations often dictates a more mainstream success for comic books, TV shows, movies or collectibles. But predicting a franchise's Comic-Con pH is tricky, since there is always an intangible element to what nerds adopt or reject.

But when you're a nerd and the nerd world is your business, you start to feel like Buffalo Springfield singing, "there's something happening here ... everybody look what's going down" about tribal movements. And after this year's Comic-Con, my gut tells me such is the case with Syfy's "Being Human."

Already a favorite of dark fantasy fans, the show stars Sam Witwer, Sam Huntington and Meaghan Rath as a vampire, werewolf and ghost (respectively) living together to achieve a sense of normalcy.

If a group of supernatural roommates sounds like a soapy set up, that’s because it is. What beloved ongoing story line in nerd culture isn’t? Hook ups, break ups, deaths, resurrections, addictions, arch nemeses, memory loss – not to mention occasional mutations, undead infestations and body switching; this is the stuff that fans cheer for at Comic-Con.

And cheer they did. The trio drew a larger crowd to their end-of-day Saturday panel this year than last. The audience in the Hilton Bayfront Hotel's Indigo Ballroom was full of fans who sat waiting there for hours, specifically so they could see the "Being Human" Stars.

The excitement around “Being Human” reminds me of the groundswell that started the current "Doctor Who" craze. The show has been around since 1963 and always enjoyed a solid fan base, but the franchise was never a dominant force at Comic-Con until relatively recently. A noticeable uptick in Whovian cosplay during David Tennant's tenure as The Doctor (2005 – 2010) started a pattern of excitement.

By Comic-Con 2011, "Doctor Who" had arrived. "Doctor Who" cosplay evolved that year to include not only an army of women fans in cute Dalek dresses, but also nerd culture mash-ups, like a zombie Doctor. Ultimately, the Hall H appearance of cast members Matt Smith (the current star of "Doctor Who") and Karen Gillan in San Diego was a watershed moment for the franchise, moving it into the mainstream.

Currently filming its third season for a Winter 2013 return, “Being Human” also has roots in "Doctor Who's" home turf. The show is the American reimagining/reboot of BBC's original, eponymous and also popular show. Reflecting on the success of Syfy's version of the franchise at Comic-Con, Huntington said he thinks it is a show that “views real world scenarios and issues through a supernatural lens.”

"Were you to take the words ‘vampire,’ ‘werewolf’ and ‘ghost’ out of the scripts, the stories would still work,” Witwer added.

But the supernatural element doesn't hurt; these types of shows are already a hit at Comic-Con (see: “Supernatural”). "Being Human" fits neatly into a crossover-friendly territory between younger-skewing, more romantic “Twilight” and the naughtier, older “True Blood.” And it certainly helps that the lead actors are attractive twenty-somethings. Even so, eye candy alone isn't enough to keep nerds coming back.

Most importantly, a genuine nerd pedigree accompanies “Being Human,” which primes it for a huge showing at future cons.

The actors have a geeky chemistry with one other that’s endearing to fans. They dodge the actor trap of being too cool for their fans, and never come across as just playing a nerd on TV. At Comic-Con, I've seen this cast earnestly interact with fans, even waiting long past the scheduled end of their appearance for fans. The cast moved around the convention together, emphasizing their support of the show and the characters they play, rather than their own celebrity.

It's a formula that works.

“I can't think of a more appropriate place to promote the show than Comic-Con,” said Huntington. “Nerd culture, and the content with which it was born, relies almost 100 percent on suspending belief, while at the same time creating characters that are inherently relatable. I think - hope - that that's exactly what we do.”

Witwer agrees. “That's why we seem to be developing an audience with our ‘nerd culture’ brethren,” he said.

It’s easy to see the nerdy kid in the grown-up Huntington, an erstwhile Jimmy Olsen and star of “Fanboys,” and Rath is a confessed bookworm.

Meanwhile Witwer, the one who has been elevated to heartthrob status, has built the most geek cred of them all after long stints voicing characters for George Lucas on “The Clone Wars” show – he is Darth Maul, for Pete’s sake – and in “The Force Unleashed” video games (not to mention his work as Crashdown on “Battlestar Galactica,” and as Doomsday and the voice of Zod in “Smallville”).

Even the show’s first season boss villain Bishop, played by Mark Pellegrino, who re-appeared in season two, is a power broker in the nerd community after his major roles on “Lost” and “Supernatural.”

If the "Being Human" cast continues to embrace being nerds, they might be the focus of the next con craze.