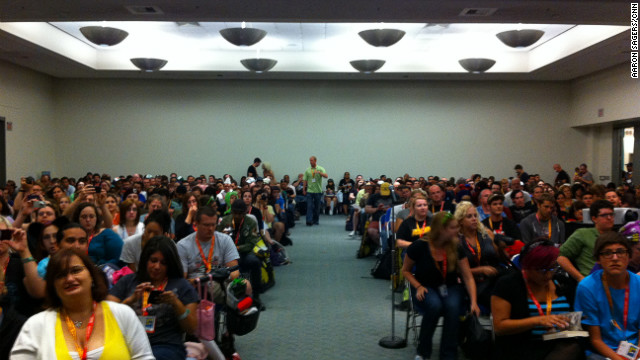 'Make them ... love zombies even more'

If Comic-Con is "nerd Christmas," then speaking on a panel at the con feels like taking Santa’s sleigh out for a spin. I have been fortunate to speak at large cons like New York Comic Con and Dragon*Con, but San Diego is the “really big shoe” – so obviously I didn’t want to crash and burn.

When Matt Mogk, founder of the Zombie Research Society, invited me to join him and zombie intellectuals, authors and experts on the “History of the Modern Zombie” panel, nerdy giddiness overcame me. That was then immediately followed by an “Oh, crap” moment.

Sure, I’ve written and spoken quite a bit about zombies but these were dudes whose work I followed, like Max Brooks, Steven Schlozman, Scott Kenemore, Bradley Voytek and Dan Drezner. Speaking in front of a crowd didn’t freak me out and I have confidence in my knowledge. But I’m also a fan and very aware that the ZRS has legit legend George A. Romero on the Advisory Board.

So, to prep, I did what any good journalist would do: call in an expert. Actor Bruce Campbell is con royalty and if he didn’t attend San Diego, it could be considered a harbinger of doom in some nerd cultures. Instead of deep, philosophical advice about my first SDCC panel appearance, Campbell kept it simple.

“Don’t get too serious,” he offered. “You’re going to be speaking in front of a thousand people; you got to play to the whole room and speak with enthusiasm and fun and get them involved somehow.”

The people in the room are clearly fans of zombies, but Campbell pointed out that I was on the panel for a reason, and it was partly my job to create a dialogue that extends beyond the hour spent on a stage.

“Make them, by the time they leave, love zombies even more,” Campbell said.

My arrival at Room 7AB of the San Diego Convention Center humbled and excited me. I was greeted by fans and colleagues, and a long line had formed – which eventually led to people getting turned away. Admittedly, most of the crowd was there for the zombie rock band of Brooks, Mogk, Scholzman and Kenemore (sort of the zombie equivalent to Crosby, Stills, Nash & Young).

By comparison, I was a garage band act, although I did break news about my the new Travel Channel show “Paranormal Paparazzi,” debuting Sept. 28, which I’ll be hosting and had the support of these dudes.

As the moderator and leader of the merry band of undead experts, Mogk introduced his panelists and threw a few softball questions before clearing out of the way and letting the fans take over.

What makes zombies unique is the fact that these Hollywood-created monsters have been transported through popular culture into the real world. Most fans don’t prepare for an encounter with Modok or the Borg as they do for a potential zombie apocalypse. Like many things discussed at Comic-Con panels, the audience clearly thought a lot about the topic and had questions to ask, anecdotes to share.

Some of the questions came faster than others, but it immediately became clear that when a panel is executed correctly,  like this one,  it becomes a conversation and not a professorial lecture to students.

I have no doubt that many fans asking the questions had as much of an encyclopedic knowledge of the genre as us authors and “experts.” But they just wanted to get our take and engage us in a discourse. That’s the spirit of Comic-Con on display: Let’s chat about the stuff we love.

There was a moment – or several – when I fretted that I’d forget years’ worth of passion about zombies and somehow slip into an analysis of vampires. But no, not only did I remember this stuff, but I was able to geek out about it, and disagree about it, with my compadres.

It was about 45 minutes into the hour-long panel that I suddenly recalled the advice given to me by LeVar Burton about being on a panel.

“Savor the moment. It’ll go by incredibly quickly,” Burton said. “It’s like your wedding day and it’s over way too fast so, consciously remind yourself, take mental snapshots of the experience and when you go to relive it, you have the materials that you’ll need in terms of imagery, sights, sounds, smell.”

Although the reality in my head may not mesh with what actually happened, the way I now remember the panel is that I was able to fire off a few smart comments or funny zingers. My role as a journalist who has written much about the genre was served, and it was fun as hell. But more than that, I remember being with “my people.” I felt at home, the ultimate emotion to experience at Comic-Con.

But after the panel, a piece of advice had rung the truest for me. Deborah Ann Woll  of “True Blood” advised me to eat the chocolate on the table that’s put in front of me, and I did do so to calm me down.

“Bring your camera with you and take a picture,” she also told me. “It will definitely be a sight.”

And it was. I was honored to be with my colleagues and the fans, and as my fellow panelists sat to have dinner afterwards, I didn’t remember much of it. As Burton warned, it was over fast and I’d reached my geek pinnacle. The photos I took during the panel were my cognitive trigger. It had happened, and I had lived in a nerd spotlight.

So, in the end I don’t think I crashed Santa’s sleigh: here's hoping for another shot at the reins.