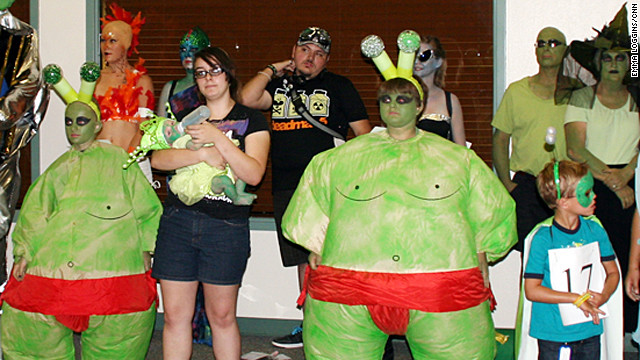 "My official reason for moving to Roswell is I wanted to be kidnapped and probed by aliens," Lasky joked. "But the other reason is it's too expensive to live in Los Angeles. We know people out here, and we're into the science fiction. We sell comics, magazines, and collectibles, so this seemed like a good place to go. We're having a lot of fun here."

Between the two festivals, attendees indulged in lectures from well-known UFO researchers and authors, vendor tables, and quirky events such as costume contests, a parade and an alien chase 5k and 10k.

The Laskys weren't the only ones having fun. More than 4,000 UFO enthusiasts moved through the International UFO Museum during the festival, and it also offered some of the most engaging events of the weekend according to Roswell resident Kelly Keith.

"The UFO museum and the people that are here are very sincere as to what they believe, and they've enlighten me," said Keith, who was attending his first UFO festival in Roswell.

The speakers at the International UFO Museum celebration included well-known UFO investigators such as Stanton Friedman, Don Schmitt, Tom Carey, Dr. Kevin Randle, Robert Salas, Freddy Silva, Kathleen Marden, and Yvonne R. Smith. These experts are no strangers to the annual festival; some have been coming to speak at the event for well over a decade.

Don Schmitt, co-author of "Witness to Roswell" and the upcoming "Beneath the Radar, the Real Area 51," is another member of this fraternity. He has been attending and speaking at the UFO museum's festival since 1995 and investigating the Roswell incident itself for the past 23 years.

"Most exciting is when a new witness connected to our research makes the effort to seek us out at the Roswell museum," he said. "They're finally stepping forward to tell us first-hand about what happened back in 1947."

These confessions, along with reputed “death bed confessions,” are top-of-mind for festival attendees as evidence by the questions they ask Schmitt and fellow investigator Tom Carey.

"People are interested in what the witnesses have waited a lifetime to finally admit and why would they possibly withhold information about something as silly as a weather balloon," Schmitt said.

Schmitt called the Roswell festivities the "grandaddy" of alien enthusiast conventions, which attracts over 10,000 people a year.

"Other such venues take place in Arizona, Oregon, and California and draw around a thousand attendees at best. Roswell can rightly take the title of the number one UFO festival in the world."

"I don't know of any other incidents with a full museum for visitors and a fine research library along direct access to investigators such as myself, Tom Carey, and Don Schmitt," said Friedman who has attended nearly every annual Roswell UFO festival since 1997.

"It's truly a cosmic 'Watergate.' The government has given out four different explanations of what happened," Friedman explained. "The sheer number of witnesses that have been found and spoken on the record is very impressive."

"As a UFO skeptic, a trip to Roswell was pretty exciting and informative for me," said Louisiana State University student Jennifer Hager. "Learning the facts surrounding the Roswell event as well as some other interesting cases about aliens and UFOs in general has me questioning the possibility of life on other planets." The festival programming included information about UFO crashes, alien abductions and crop circles in addition to run-of-the-mill unidentified flying objects.

But as attendees from as far away as the U.K., New Zealand, and Australia shuffled through the International UFO Museum, they all asked the same question – what was it that happened in July of 1947? Was it a flying saucer or a weather balloon that crashed down that summer?

Thanks to the UFO convention, the debate about what actually happened there in Roswell continues.