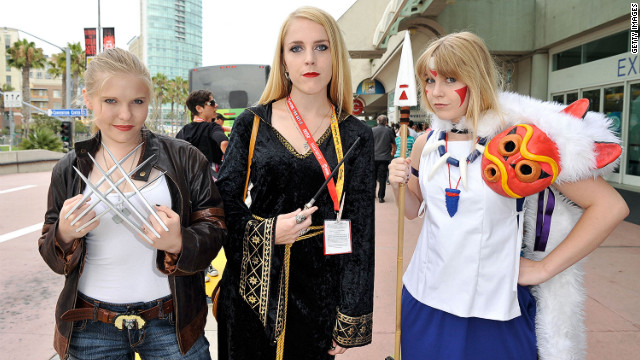 It truly sucks when you find those people and realize that they don’t believe you’re one of them and when they make it clear that you’re going to have to jump through some hoops to prove you’re worthy of being included. It especially stings when it comes to one particular element of being a female geek: the part where you are simultaneously appreciated and denigrated for your sexuality.

The thing is? Geek guys are definitely not opposed to the idea of sexy women.  Highly sexualized women in skimpy outfits have been a part of geek culture for a long time. It often gets taken to hilarious extremes. Female comic book characters that manage to display both their boobs and their butt in body positions that defy all known facts about human anatomy are common. (See the adult content Escher Girls tumblr for great discussion on this particular sexist trope.)

In fact, most of the female characters that geek guys love don’t wear a whole lot in the way of functional clothing (unless they were created by Joss Whedon). It’s pretty clear that geek men don’t object to sexy women.

What some of them DO object to are sexy women in skimpy outfits who expect to be treated like people.

Here’s the double-edged sword: to be visible at all in geek culture, women often have to be conventionally attractive and comfortable playing the role of eye candy. Women who aren’t are generally ignored at best, and harassed, fat shamed, mocked, and disdained at worst. These same women who are being derided and dismissed as attention whores and poachers would be all but invisible if they distanced themselves from their sexuality.

That’s a huge problem, but it’s not a problem that we’re going to solve by making these women feel less welcome. The Frag Dolls, for example, are attractive women. That’s also not even close to all they are or all they contribute, and ignoring what these talented women accomplish as professional gamers and as advocates for women in the gaming industry, as Peacock did in his opinion piece, does them a major disservice.

I reached out to the Frag Dolls in the wake of the booth babe Twittersplosion. The group, which Ubisoft PR spokesperson Michael Beadle said has been around since 2004, vocally supports female gamers and game developers. Their appearance on convention panels and their contributions to a growing online community are, "part of a larger effort to raise awareness about video games as a legitimate pastime and career for women," Beadle said.

The work they do to promote a more inclusive culture for women gamers shouldn't be ignored or dismissed.

The other problem with this whole conversation about which women are legitimately geeks and which women are just faking it for male attention is that it still assumes that men are the ultimate arbiters. It’s another reminder to women that while we may be appreciated for our decorative qualities, we certainly shouldn’t expect to be welcomed beyond that as active participants. It’s another hoop to jump through, and a glaring indication of the fact that we’re seen as girls first, geeks second, and that we’re always going to have to work harder to prove that we belong.

It also assumes that all the women who attend conventions in sexy attire are doing it for the same reasons. This is patently false. Some women just genuinely enjoy dressing as highly sexualized characters, and they’re geeks through and through. Some women are being paid as professional models by major corporations to sell products to men, and shouldn’t be shamed for doing an honest day’s work. Some women are new to geek culture and are finding their way, and yes, some women are looking for attention and validation and a way to feel liked and accepted.

What’s wrong with that? Geek culture has traditionally been a haven for men who are looking for acceptance and haven’t found it in other places. Why should women be treated any differently? This idea that pretty girls have it all together and that they’re all consciously using their pretty girl powers to hold dominion over nerds really needs to die already. It’s not true. Learning how to be comfortable with ourselves is a lifelong journey for most women.

There are so many men, women and individuals who identify as neither or both who are clamoring for a more accepting and inclusive geek culture. It’s an awesome goal, and we definitely can’t get there by shaming women who enjoy expressing their sexuality through cosplay.

This whole conversation could have been really positive. It could have focused on the idea that geek demographics are shifting, and that hiring scantily clad women to sell your product is no longer the best way to go about it. It could have focused on the fact that there are a lot of different ways to be a geek, and celebrated those “stunningly beautiful women who cosplay as stunningly beautiful characters from comics, sci-fi, fantasy and other genres of fandom”. It could have encouraged women who are new to geek culture or who hover on the fringes to really find what they like and get involved.