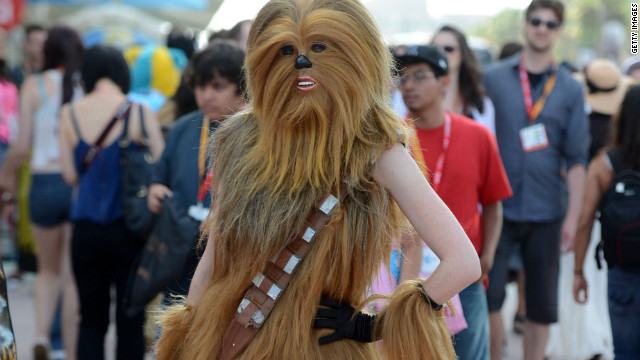 Editor's note: This post is part of the Overheard on CNN.com series, a regular feature that examines interesting comments and thought-provoking conversations posted by the community.

Joe Peacock's latest opinion piece for CNN Geek Out caused quite an uproar. We saw more than 700 comments and at least hundreds of tweets about the article, which expressed a complex point of view blasting the phenomenon of beautiful "booth babes" at fan conventions including San Diego Comic-Con. At the same time, Peacock also said he supports women's increased acceptance within geek society.

The article spread far and wide, and got mentions on Jezebel and Bleeding Cool. Some of our readers thanked CNN for publishing the piece, while others found a few sticking points with Peacock's reasoning.

One of the most notable people to talk about the article was none other than actress and writer Felicia Day, who is mentioned in the post. She in turn got numerous replies from other Twitter users.

Peacock writes about Day, "Not only does she put her money where her interests are, she creates things that further the community."

Peacock contrasts her with "models-cum-geeks like Olivia Munn and practically every Frag Doll," whom he sees as examples of corporate attempts to hire people who "act quirky and sell this marketable geekdom" to a lucrative audience.

The Frag Dolls, for those not in the know, are a team of female gamers deployed by Ubisoft to promote and support women in gaming.

Bryan Lee O'Malley, creator of "Scott Pilgrim vs. the World," had a slightly more humorous take on the piece.

Some people weren't sure what to think.

Others said they were sure they had seen something like that before.

The conversation was bustling in the comments section of the story, as well. As word got out about the post, some readers thanked CNN for understanding them.

wrenthefaceless: "Thank you for this article, you can't imagine my personal and my girlfriend's frustration with this influx of girls 'geeking' for attention."

Anna F.: "What a beautiful, beautiful blog post! I consider myself one of those 'geek girls that happen to be pretty.' I am a video game design student and I have been gaming ever since I could hold a controller. I enjoy every aspect there is in 'geek world.' It's quite hard to get along (as you explained very well), but I rejoice in people who know the difference between the two types of girls in geek community. I salute you, Sir!"

This man said he prefers "the real thing."

Bob: "I have been going to cons for years. I like my country singers to be drunks who have real world issues, I want my rappers to be gangsters and I want my geek girls to be REAL geeks. It is not that hard to ask for integrity in the things that I am into."

The conversation began to spread over social media, and one reader went so far as to quote from the growing number of reader comments in her tweet.

Here's a portion of what the commenter wrote:

jamespeach: "... #5 The problem is not these supposed culture vultures. Don't get mad at them. Get mad at the fact that you pay crap-tons of money to buy drawings of women who can't biologically exist. Get mad at the fact that you are into characters who wouldn't give you the time of day, not the women who dress like those characters. Have you READ a comic lately? I don't want my daughters even seeing that mess. The problem isn't the real women, the problem is the fictional ones that you spend billions on. YOU built that mode of operating, not the handful of Olivia Munns who are making a living from it. If you ask me, I'd rather actual women make some of the money from thirsty nerds than the middle-aged men who draw impossible boobs all day. You're paying for it already, man. It was central to the industry before you were driving."

A few readers said they didn't understand what point the piece was trying to make.

Roscoe Chait: "Somewhere in the middle of this rant, Joe lost his train of thought. Maybe the idea of a beautiful girl was just too much for him, and he became mucho distracted."

Don't hate the booth babes, opined this reader, hate the people who hire them.

Seriously?: "Wow Joe, are you just going for effect here or are you really that naive to believe that these 'fake' geek girls actually WANT to be there?! Just like at CES, these girls are in most cases models, hired by the very companies that you geeks adore, to make you drool. If you want to hate, hate on the companies that are stabbing your geekdom in the back. Meanwhile, step aside and watch how to talk to a pretty girl."

We also heard from a reader claiming to be a past booth babe. She offered her thoughts.

Nikki: "As a true geek chick (tech, gamer, comic and cosplay) and repeat 'booth babe' who wasn't a moron ... thank you! I can honestly say I always had a crowd at my booth, not because I was the hottest booth babe (far from it. ... I'm all natural, with the exception of my costume and hair ) but because when someone would ask me about things, I could respond intelligently! I knew how to talk, I knew how to lead the crowd, and people could tell I wanted to be there for the culture, not because I was getting paid! I was always happy to answer questions from anyone asking them, and yeah, we had some epic debates ... which seemed to never happen at some booths. You could always tell in the first couple of hours which 'models' were going to be asked back for additional cons."

Another commenter said she had worked as a model at other kinds of conventions. She described the experience.

malonealone: "It is widely understood that at all types of conventions, some people are paid to do jobs that do not require them to know the 'product.' I used to do some convention modeling as a side gig. One day in heels on the convention floor paid better than a week at my 'real job' that required a graduate degree in my field. Everyone at the conventions was privy to the arrangement: pretty girls done up to look like they belong are often paid to stand there. But most businesspeople at corporate trade shows (which is frankly what comic conventions are) don't call the models out for being posers (or whatever clever lingo you have for 'fakers'). What about the celebrities contractually obligated to be there whom you fawn over? Same thing. And calling these women 'failed models' is also pretty lame since they are actually working as models."

But the idea that geeks can't find love isn't quite the truth, said this reader.

Wrenn_NYC: "Hate to break it to you, Joe, but we've been around fandom for decades. I once was one of the 'pretty' girls at conventions, 20+ years ago. I've always been a gamer (just not a video one) and into sci-fi. I tend to run things at nonprofit conventions on the East Coast. And to everyone else, it's really an urban legend that geeks don't get laid. It's always been one. It was never our reality."

Could booth babes be banned?

Nope: "Convention hosts could solve this problem by simply forbidding anyone from hiring models/actors for booths/endorsements and if they keep on hiring them, then deny them space at the convention. Problem solved. Granted there would be a lot less "eye candy," but then you would have far fewer 'fake geeks' at conventions."

The topic has come up on the discussion forum for Penny Arcade Expo and made it into the headlines as well.

Dockboy: "The Penny Arcade Expo has been doing this for at least four years now. They have explicit rules that forbid 'booth babes' in the expo hall of PAX. The 'booth babes' still get in, but they are always dealt with quickly by organizers. I have attended many PAX events and I can confidently say I am happier that there are no 'booth babes' at the show. We have the games, we have the people, we have the fun. That is all we need."

Then there's the sticky issue of what constitutes an actual geek. Is there some kind of identifying mark or secret handshake?

Penny: "This piece is wrong on so many levels. Despite its good intentions it comes off as another instance of community policing ("ethical cleansing"). And since when does 'female' anywhere, geek or wherever, need to be qualified or justified by 'pretty' or 'stunning'? There is no monolithic experience of geekhood and these concerns are best handled at the relational level. So let the individual or the clique decide and speak for themselves."

baorddog: "Why is it people are so desperate to label themselves? I love Trek, R&R music, country, computers, surfing and many other things. I guess I can't be jammed into a packaged label. Whatever. ..."

What's your take? Share your opinion in the comments area below and in the latest stories on CNN.com. Or sound off on video via CNN iReport.

Compiled by the CNN.com moderation staff. Some comments edited for length or clarity.