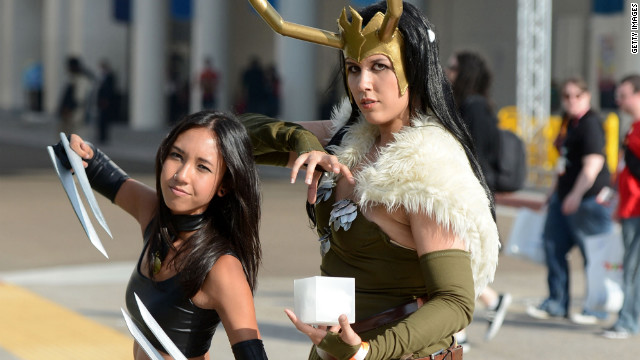 Editor's note: When he's not teaching the Internet how to fist-fight, why being weird is awesome or how to self-publish your own books, Joe Peacock tours the world, showing his extensive "Akira" art collection. He also cosplays as a six-foot-two-inch, 310lb Powerpuff Girl to fill the hollow pit that is his need for the wrong kinds of attention.

There is a growing chorus of frustration in the geek community with - and there's no other way to put this - pretty girls pretending to be geeks for attention.

San Diego Comic-Con is the largest vehicle, but it's hardly the only convention populated with "hot chicks" wearing skimpy outfits simply to get a bunch of gawking geeks’ heads to turn, just to satisfy their hollow egos.

Now, before every single woman reading this explodes, let me disambiguate a bit. I absolutely do not believe that every girl who attends conventions and likes "Doctor Who" is pretending to be a geek.

There are lots of geeks who are female. Some of these female geeks are pretty girls. I find it fantastic that women are finally able to enjoy a culture that has predominately been male-oriented and male-driven.

The presence of female geeks means that the fiction we're reading is broadening and, frankly, getting better in quality. It means nerdy films and television shows aren't relying on damsel in distress stories and objectification of women to draw readers. It means content is broadening and becoming smarter and more accessible. I want more of that.

Flaunt it if you got it – and if you're a geek, male or female, and you're strikingly handsome or stunningly beautiful, and you cosplay as a handsome or beautiful character, more power to us all. Hot geeks are hot.

What I'm talking about is the girls who have no interest or history in gaming taking nearly naked photos of themselves with game controllers draped all over their body just to play at being a "model."  I get sick of wannabes who couldn't make it as car show eye candy slapping on a Batman shirt and strutting around comic book conventions instead.

I'm talking about an attention addict trying to satisfy her ego and feel pretty by infiltrating a community to seek the attention of guys she wouldn't give the time of day on the street.

I call these girls "6 of 9". They have a superpower: In the real world, they're beauty-obsessed, frustrated wannabe models who can't get work.

They decide to put on a "hot" costume, parade around a group of boys notorious for being outcasts that don't get attention from girls, and feel like a celebrity. They're a "6" in the "real world", but when they put on a Batman shirt and head to the local fandom convention du jour, they instantly become a "9".

They're poachers. They're a pox on our culture. As a guy, I find it repugnant that, due to my interests in comic books, sci-fi, fantasy and role playing games, video games and toys, I am supposed to feel honored that a pretty girl is in my presence. It's insulting.

Is it abuse in the same vein as the harassment? Not even slightly.

Someone dressing up to feel good about themselves isn't the same as guys lobbing insults, threats, disgusting suggestions and the like at women.

Is this type of harassment is deserved? Not at all. Are guys acting this way toward women just as disgusting and base as women poaching attention from our culture, satisfying their egos by strutting around a group of guys dressed in clothing and costumes from a culture filled with men they see as beneath them? Absolutely.

I think that these things sully what is otherwise an incredible group of people and bring down a beautiful culture. I feel the same way when some guy reads about a hot comic book title sure to be a collector's item, drives up demand by buying up all of those issues and resells them on eBay for hundreds of dollars. He doesn't love the culture. He doesn't add anything to it. All he does is make scarce a resource that we want and love, in the name of profit.

I hate poachers. Pure and simple.

The growing presence of these Olivia Munn types in the geek community is creating dialog that isn't helping anyone. You've no doubt heard about a young journalist named Ryan Perez who did something stupid. Really, really stupid. He "called out" Felicia Day on Twitter, asking if she really contributes anything to geek culture other than being a celebrity.

I believe that Felicia's main drive is probably writing and acting, and that geek culture is where she chooses to exercise her talents. She's found a niche, and she works within that niche – but so have Nathan Fillion, George Takei, Wil Wheaton... All actor/writers who make the most of their geek celebrity. However, no one gets it in their blood to call these guys out. So why Felicia Day?

It's because she's a girl, and some men are disgusting. Plain and simple.

Felicia Day is not a poacher. She's a celebrity, sure. She's a pretty girl, absolutely. The fact that she chooses geeky avenues to focus those interests? That makes her a geek. The fact that she spent her own money to make a successful independent video feature centered around World of Warcraft puts her into ubergeek territory. Not only does she put her money where her interests are, she creates things that further the community.

But then, you have these models-cum-geeks like Olivia Munn and practically every FragDoll. These chicks? Not geeks. I think that their rise is due to the fact that corporations are figuring out that geeks have money, and they want it. But they can't abide putting a typically geeky face on camera, so they hire models to act quirky and sell this marketable geekdom. So, I can understand why someone completely ignorant could look at Felicia Day and see a pretty woman who is making one heck of a career starring in roles celebrating fandom, and mentally file them along with the fake geek G4 hostesses. Ryan Perez is a shoddy journalist and failed to do any research.

He knee-jerked his way into temporary internet infamy. I think he was an idiot. But I can see why he bubbled over.
There's no doubt about it – girls in geek culture have it hard, and it's probably going to be that way for a long time. At least until men stop lusting after women (so, like, never).  But that doesn't mean that women aren't welcomed and accepted in geek culture. Women elevate the culture, and thus, the content. And, I'll admit, you ladies are much nicer to be around.

However, you "6 of 9s" out there? You're just gross. There's an entire contingent of guys in geekdom who absolutely love you, because inside, they're 13 year old boys who like to objectify women and see them as nothing more than butts and a pair of boobs to be leered at. Have fun with them, and don't be shocked when they send you XBox Live messages with ASCII penises.

Those of us who actually like substance? We'll be over here celebrating great comics, great games, great art, great movies and great television, because we're actually attracted to a completely different body part: the brain.

A counterpoint from Genevieve Dempre posted here, and more from Peacock.