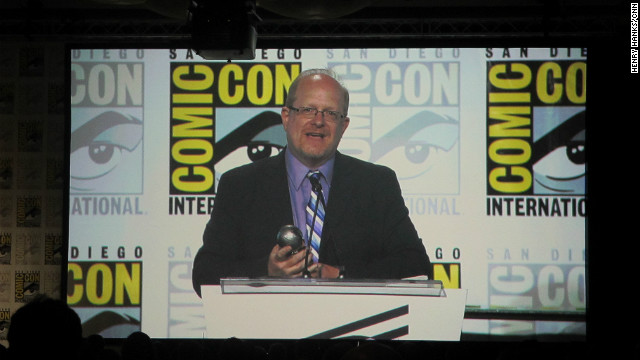 The Eisners: The Oscars of comics

The Eisner Awards, held every year during San Diego Comic-Con, are the highest honor anyone in the comic book industry can receive.

Not only are the best works of the year honored, but the ceremony also gives out lifetime achievement and posthumous awards. (For example, Katsuhiro Otomo, the creator of "Akira" received Hall of Fame recognition this year.) The awards are named for late cartoonist Will Eisner.

This year's ceremony was a showcase for the wide variety of recent comic book work. It included a few tearful speeches, a few awards presented by "Game of Thrones" creator George R.R. Martin, and a Russell Brand-esque turn by Jonathan Ross at one point during the evening.

Here are some of the big winners from Friday night's show:

This story about a strange man in a strange land was co-written by the late Henson, a lost screenplay that was adapted into comic book form.

It won three awards including a big one, Best Graphic Album – New.

"It was an amazing experience to be part of the Jim Henson legacy, a guy I grew up with 'The Muppet Show' and 'Sesame Street,'" said Ramón K. Pérez, who adapted the story. "Archaia [Comics] let me run wild and gave me free rein and thankfully it worked out. Thank you to Lisa Henson for letting her run with her father's legacy, we couldn't have done it without her."

Daredevil is hardly a new character but writer Mark Waid's recent take on him for Marvel Comics has earned critical raves. Waid, who had never won an Eisner before, received three for his work on the series (and others) this year, including Best Continuing Series and Best Single Issue ("Daredevil" #7).

"The list of people I have to thank is a career's worth long, because it's all the artists and editors I've had over the years," Waid said. "Thanks for this. I am just gobsmacked."

Jeff Jensen was about as close as you can get to his subject. His father investigated the infamous Green River Killer cases from the 1980s until 2001.

"I have to breathe for just a second," he said at one point, overwhelmed with emotion. "To my father for sharing this whole story with us, and with my family. I was just so proud of him and wanted to tell the world about him. Thank you very much."

"Criminal: The Last of the Innocent"

Ed Brubaker's "film noir"-esque mini-series won for Best Limited Series, and he gave a touching speech upon receiving the award.

"I wrote this story with my dad on his deathbed," said Brubaker. "He was a lifelong comic book fan. He started taking me to [Comic-Con] when I was nine years old in 1977, and I grew up at this place. This was my tribute to him and my tribute to the comics I read as a kid, filtered through my twisted imagination."

Writer/artist Darwyn Cooke won Best Graphic Album – Reprint and Best Short Story for "The Seventh," within this compilation, which includes the first book in the series, a New York Times bestseller. They continue the stories of the anti-hero Parker, created by the late Richard Stark.

"What I really wanted to do more than anything was to thank my editor and my dear friend Scott [Dunbier]," said Cooke, a fan favorite after his work on the 1960s-based mini-series "DC: The New Frontier."