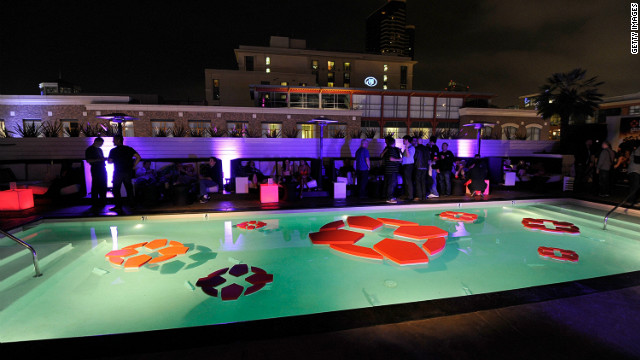 A tale of two Comic-Cons

Never before had I felt such a sense of belonging accompanied by one that I was out of place.

San Diego Comic-Con 2011: After a day of conducting press interviews and covering panels, I hit The Con floor to pick up some swag before booths closed. There were more than 130,000 attendees and I think I bumped into every single one of them. My eyes were in constant danger from too-close interactions with passing wings, lightsabers, claws and more than a few Dalek protrusions – and I had no Nick Fury patch to cover any resulting eye loss.

Despite the threat, and claustrophobia, I felt I was with my people.

With a newly acquired foam Sword of Omens from “ThunderCats” and an Oscorp Industries ID badge from Sony’s “The Amazing Spider-Man” display, I headed to the Hard Rock Hotel across the street from the convention center in pursuit of a Her Universe “Sharktopus” tee from the Syfy shop.

People lined up outside a Hard Rock club, and my finely-tuned instinct to pursue free food and booze (when not pursuing swag) kicked in. An SUV limo pulled up, the very important posse of a very important person filed into the club, and the nerds outside were left with a snapshot of a celeb and an encounter with the superhero of the Con’s party circuit – the Velvet Rope Guardian.

The message is clear: This is not for you, you don't belong, return to the your area.

When Hollywood started showing up at the Con a few years back, it brought exclusive happenings that your average fan wouldn't be invited to, or likely even hear about. Nerds who complain they liked the Con before it was cool often mention this; the celebs show up to shill and court fan buzz but don’t really want anything to do with them after an hour-long panel or autograph session.

However, another nerd contingent is fine with that. They argue the pretty people should retreat to their swanky soirees and do their thing because they’d prefer to hang with fellow geeks at multiple open-access joints, like last year’s “Cowboys & Aliens” saloon or the Café Diem from “Eureka.” There are enough events like the masquerade or zombie walk to keep Comic-Con a nerd event. To focus on the celebrity culture and crave insider status is to miss the point of the Con anyhow.

Then there is the hybrid celeb/fan event, like this year’s “Con of the Dead,” sponsored by horror network and website FEARnet. By distributing tickets to 300 participants of the zombie walk, and then giving away more through genre co-sponsors like DreadCentral.com, the party creates an exclusive-to-fans vibe. Not everyone will get in, but those who do will be able to mingle with horror personalities and get a chance to feel important.

So is SDCC a tale of two cons – or maybe two and a half? Has it become too much for the famous, or is it still for the fans? To answer the question, we reached out to some trusted nerds and Con regulars for their take.

Adam Green (“Holliston,” “Hatchet”):
"If my name is on that list and I can’t bring in friends that aren’t, I won’t go.  That’s where Comic-Con starts to get a little disgusting to me. One of the things I’m most proud of is the ‘Con of the Dead’ party – FEARnet and Dark Sky Films are doing everything they can to make sure fans get tickets … so that it won’t just be a bunch of people that see each other in the business.

You’re there for the fans … why do you need every agent and manager from Hollywood in there to drink their free drinks? Get the fans in there; that’s how you’re going to sell your product and make those relationships."

Sam Witwer (“Being Human,” “Star Wars: The Clone Wars”):
"The parties for me are just, ‘I can see people that I haven’t seen for a while’ … that has nothing to do with any kind of weird elitism or anything. There are people there you have relationships with. They congregate at these parties. I don’t like the loud music, I don’t like all the fancy stuff about it, but I like seeing the people."

Morgan Spurlock (“Comic-Con Episode IV: A Fan's Hope,” "Super Size Me"):
"I meet people who end up getting into parties all the time. I think if you’re somebody who can get your hustle on, you can get into a lot of things. … As a geek, as a fan, to get to meet people that you idolize and put up on some sort of pedestal is fantastic."

Deborah Ann Woll (“True Blood”):
"I think part of the fun of Comic-Con is it’s an opportunity for the fans to become involved in what would usually feel like an insider, entertainment-industry world. It does feel like, sometimes there are the two worlds – but then there are people like me who are actually part of both worlds and actually prefer the geek world. I don’t go to any of the parties, really. I’ve never been very comfortable at parties, so I much prefer the panels and dressing up in costume."

LeVar Burton (“Star Trek: The Next Generation”):
"It’s less about the fan experience. The marketing machinery of Hollywood is really the engine driving the train in San Diego now (and I understand the same is true of Jacob Javits Center at New York Comic-Con). Look, I believe in the free market economy and I get that Hollywood has finally recognized the value that fan culture, and specifically geek culture, represents to them, in terms of a demographic that they can market to. And unfortunately, it’s an atmosphere and an environment that isn’t as much fun as a fan-run convention. But I try and make every encounter with a fan a positive one because that’s just my point of view on being a celebrity."

Bruce Campbell (“Burn Notice,” “The Evil Dead”):
"The entire city of Los Angeles empties out for Comic-Con. They’re just conducting show business that’s around some other kind of crazy theme. It’s a way for studios to see if people are really interested.

And then, on the geek side, if you will, they can still have a ball because they get to see everything bigger than life. They get to see movie stars talking about [some stuff]. They get to see more now than they ever did. … I do think it’s too commercial now because Hollywood has muscled into our little convention world and started elbowing us in the face. And I’m like, ‘Hey, why don’t you eat it, man? … Sometimes it just takes a little bit of the fun out of it."