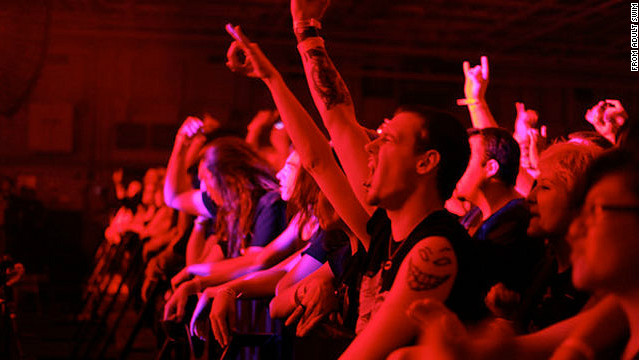 Fans lucky enough to get a ticket to the Dethklok concert abord the USS Midway get a dose of crushing metal and brutal cartoon.
July 15th, 2012
09:01 AM ET

Who needs Comic-Con when you've got Comic-Con?

Fighting through the throngs of revelers at San Diego’s packed convention center during Comic-Con can be a harrowing experience - an overwhelming crush of sharp elbows and gigantic swag bags.

It's worth the hassle for plenty of pop culture fans. But lately, some pass-holders are happy to escape the panel lines and exhibition hall (which is as humid as any Florida afternoon) even though they likely spent $175 on admission.

Welcome to the party across the street - and even down the block. There's a slew of scheduled events and multi-day hangouts outside the venue that celebrate comic books and nerdery.

Starting before most attendees were in town for the convention was "Course of the Force." Last Saturday through Wednesday, Make a Wish Foundation donors took part in a beach-hopping, light-saber-wielding run, with Ashley Eckstein (the voice of Ahsoka Tano in "Star Wars: The Clone Wars") and comic-musician-actor Chris Hardwick at the helm.

A vaudeville-esque comedy show geared toward nerds, W00tstock is often called "nerd church." Hosts Wil Wheaton, Adam Savage (of Mythbusters) and musical comedy duo Paul & Storm presented a night of comedy and music from many of their high-profile, geeky friends. A special appearance by LeVar Burton left his old "Star Trek: The Next Generation" co-star Wheaton visibly stunned, after an impromptu singalong of the "Reading Rainbow" theme song.

"That was a real thing that actually happened!" squeaked Wheaton.

Levi and company brought back their Nerd HQ to Comic-Con for the second year in a row. A haven for gamers, with monitors everywhere, Nerd HQ offers fans a program of "Conversations" which are more intimate than the panels across the trolley tracks at the convention center. Ticket proceeds from the Nerd HQ panels go to Operation Smile. A "Chuck" reunion panel was sold out instantly.

Also Thursday night, musician and horror film director Rob Zombie hosted "Dawn of the Con," a party held in nearby Petco Park. The event was open to all Comic-Con attendees. Before Zombie's bash got into full swing, the Walking Dead Escape was taking up the park. This obstacle course had attendees dodging zombies like the ones on TV's "The Walking Dead."

For Thursday and Friday, actress, writer and gaming culture icon Felicia Day hosted panels, signings, games and more at the "Geek & Sundry" offsite venue. Many of Day's cohorts from her new YouTube channel of the same name were available and mingling with fans: Wheaton was a familiar face that made the rounds.

On Friday night, "Metalocalypse" fans got to watch creator Brendon Small's touring Dethklok band give a private concert aboard the USS Midway, a 10-minute walk from the convention center. The limited number of tickets sold out in 24 hours for this intimate - but loud and totally brutal - metal show. Small and the band arrived on the flight deck via helicopter at sunset, and minutes later were shredding in the belly of the aircraft carrier. Fans head-banged to Dethklok songs as Small showed off his Berklee-educated guitar chops.

Meanwhile, back in the Gaslamp District at the Balboa Theater, Chris Hardwick was hosting the annual SDCC "Nerdist" podcast with sidekicks Jonah Ray and Matt Mira. This year's special guest was "Torchwood" and "Doctor Who" star John Barrowman.

There are plenty more offsite opportunities for fans that last the duration of the convention. Gaming companies Cryptozoic and Magic the Gathering offered space for tabletop gamers to mingle and play at their leisure. Japanese gaming company Namco Bandai created a video game tent by the Hilton Gaslamp that offered gamers all variety of Namco titles, including classics like Galaga.

Gaming has developed an especially strong presence outside the convention center, with Gam3rcon, a separate San Diego convention that overlaps SDCC, leading the way.

HGTV and Disney took over the area in front of the Hilton Gaslamp to build an "electric garden" promoting the upcoming Tim Burton movie "Frankenweenie." Just around the corner was an installation of the weapons-loaded trailer from the television show "Grimm."

Down Fifth Avenue, DC Comics is hosting a superhero and supervillain art show at the Michael J. Wolf Gallery. Even makeup store MAC got into the Comic-Con action, launching a line of "Archie" cosmetics at its store opposite the convention center.

Think you "need a miracle" if you're in San Diego without a Comic-Con pass? Think again!