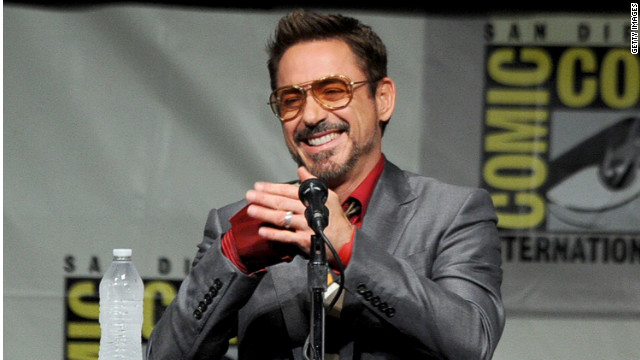 "I'm a huge fan of Peter Jackson. I love the 'Lord of the Rings' movies," he said. "I love what I've seen of 'The Hobbit' so far, so I'm looking forward to that one enormously."

Still, some Tolkien traditionalists were unhappy to learn that a female elf character, played by Evangeline Lilly, was being added to the fold. Writer Phillippa Boyens explained to the audience the reason: There were far too many men in the movie.

The audience cheered at brief glimpses of McKellen, Orlando Bloom and Martin Freeman,  and seemed mesmerized by the extensive footage. A high point was Andy Serkis' F-bomb-dropping rendition of the Gollum voice.

Of course, this being a Hall H panel, the Warner Bros./Legendary Entertainment pair (Warner Bros. is owned by Time Warner, as is CNN) had a couple of tricks up their sleeves. It's become expected practice at Comic-Con for large entertainment companies to spice up their panels by interjecting quick, funny appearances promoting upcoming movies.

Will Ferrell and Zach Galifianakis showed up to shill "The Campaign."

After Guillermo Del Toro's much-anticipated "Pacific Rim" panel, a surprise second movie trailer based on the Japanese kaiju genre unspooled. This time, it was a direct inspiration: a reboot of "Godzilla." When the legendary monster roared, it shook Hall H to its core and the audience roared back in approval.

And then there was the little matter of DC Entertainment's follow-up to "The Dark Knight Rises," a brand-new take on Superman entitled "Man of Steel."

Fan favorite director Zack Snyder's trailer looked unlike anything he had ever done before, and one fan wept when he got the chance to ask a question of Snyder and the new "Supes" himself, Henry Cavill.

At least for a moment, it seemed that Superman was due for a triumphant return on the big screen. Of course, next summer, this granddaddy of superheroes will face stiff competition.

The Marvel Studios panel featured the first look at "Iron Man 3" as well as announcements about "Thor: The Dark World," co-starring "Chuck's" Zachary Levi, "Captain America: The Winter Soldier," "Ant-Man" and "Guardians of the Galaxy" films.

Out of nowhere, Robert Downey Jr. made a guest appearance, dancing his way to the front of Hall H to the music of Luther Vandross.

Fan expectations for this could not be higher, following the runaway success of "The Avengers."

"I enjoy the character of Tony Stark, I care about him, so I want to see more story on him," said Golightly.

The combination of Marvel and Downey is a 101 course in showmanship. The studio consistently delivers Hall H thrills. Downey fed off the crowd's energy and even led the panel and the entire hall in singing "Happy Birthday" to a 15-year-old attendee.