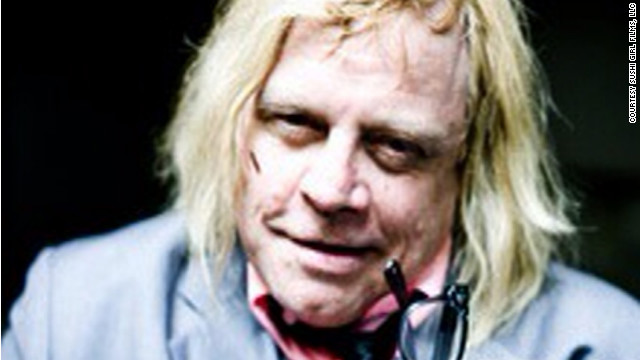 In the latest movie, "Sushi Girl," Mark Hamill plays an ex-convict that looks nothing like his iconic character Luke Skywalker.

With horn-rimmed glasses and shoulder-length hair, Hamill shares one very tense dinner with the criminals who landed his character in jail.

But going incognito is nothing new for the actor. Hamill has made a name for himself in the voice acting community, first for playing the Joker in 1992's "Batman: The animated series," and later on for contributing to "Avatar: The Last Airbender,"and "Metalocalypse."

He's also got two English versions of Hayao Miyazaki films under his belt.

"It's a rhythmic thing," Hamill said about dubbing the original Japanese versions of Studio Ghibli's "Nausicaa of the Valley of the Wind" and "Castle in the Sky."

"I just have a facility for it," he said of matching the animated lip movements of his characters.

Hamill sat down with CNN Geek Out to discuss all things Comic-Con, animation and more.

CNN Geek Out: Why do  you think Japanese animation can be so much more serious in tone than American animation?

Mark Hamill: The adult themes are much stronger in Japanese animation. My dad was in the Navy so we got transferred to Japan and I went to Yokohama High School for two years, my junior and senior year of high school.

And I realized it's not all "Speed Racer."

I lived in Yukosuka, which was about an hour away from where the school was. If you missed the school bus, you had to take the train out. And lots of guys (on the train) were reading Japanese comic books. When you say comic book in America, people think of Mickey Mouse, and Archie. It has a connotation of juvenile. But (manga) did popular spy detectives and melodrama, just in that form. It was very common to see people on the subway reading manga.

Geek Out: 'Sushi Girl' is a really adult story. Do you think people are ready to see you in such a role?

Hamill: I think so. It's unlike a lot of the things that I get offered. But it's very much in the Tarantino world. It's gritty and I liked the way they didn't glamorize crime. These are seedy guys with low moral standards. It makes crime look ugly and sordid. I just loved that the character I was proposed to play was so out there.

Geek Out: What was your first impression of the voice-acting community?

Hamill: As a character actor, animation was a revelation to me. Every character actor wants to lose himself in the role to the point where there's no "Mark" left; it's just a character. In animation you're 90 percent there anyway because they can't see you. That pretty much defines character acting.

And you get to play parts that you would never get cast in for live action. Although, ironically, when I asked ("Sushi Girl" producers) "Why'd you think of me for the role of this psycho?" they said, "Well if you can do it in cartoons, we thought you could probably do it in live action." This is probably the only part I've ever gotten as a result of Joker.

Geek Out: The voice actors we've interviewed in the past, like John DiMaggio, Billy West, Phil LaMarr and Yuri Lowenthal are unabashedly enthusiastic about their nerdiness. Is that true of the whole community?

Hamill: In high school I had to hid my comic book side, my nerd side from the civilian world so they wouldn't categorize me. They would try to marginalize me for what I like. I tried to give it up, believe me. I tried to kick the habit. But there's too much I liked about it to give it up completely.

In college I found myself in a bookstore, Cherokee Books on Hollywood Boulevard, and upstairs there was a comic book room. It was a used book store - I love used book stores, I really do. But (up there) it grabbed me all over again. When I left for college I had given all my comics to my younger brother.

Geek Out: A lot of nerds do that - they hide in plain sight.

Hamill: Yeah, but here is a convention where they all let their freak flags fly. I don't know how long you've been coming here, but I was talking about this this morning. I can remember back when they announced there would be 5,000 people attending and we were all shocked. Cause when I first went, the very first Comic-Con I went to was in the basement of the Ambassador Hotel in 1971. There was probably about 15 dealers. And in another room they had a 15 millimeter projector so they could show "Flash Gordon" serials and "Metropolis."