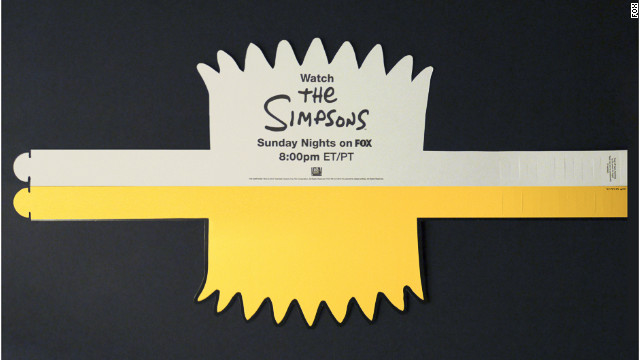 Fans can take on the persona of one of the most popular comic book characters of all time with this free Bart Simpson hat.
July 12th, 2012
11:14 AM ET

At Comic-Con, the swag's the thing

San Diego Comic-Con attendee Aloysious Fitzsimmons is on the hunt. His prey is swag. He's not the only one hearing "the rumors of free stuff."

Those aren't just rumors. Nearly every booth at Comic-Con had some sort of giveaway. Here were some of the most interesting pieces of swag and trends we spotted.

Hats are bigger than ever: With the scorching San Diego sun out this year, many fans are wearing hats, some of which are being given away at booths. Following the wildly popular Galactus hats of years past, cardboard princess crowns were everywhere, foam Dalek hats were seen at the BBC America booth, and the Disney Store had colorful Vinylmation hats.

Giveaways via social media: Disney plans to give fans the chance to get a free Vinylmation figure via Twitter.

Posters are perennial: The movie and TV studios will gladly give you pretty much as many posters as you want for the various projects they're pushing this year.

Carnival barkers: Many a booth has MCs shouting announcements over the roar of the crowd about what precious freebie is next for the first person who can answer a trivia question or prove that they're a superfan in some other way (the competition is fierce, as this is Comic-Con after all).

The best swag is personalized swag: Fans crave personal one-on-one time with the writers and artists they admire, so sometimes an autograph or photo is worth more than any poster (unless it is an autographed poster).