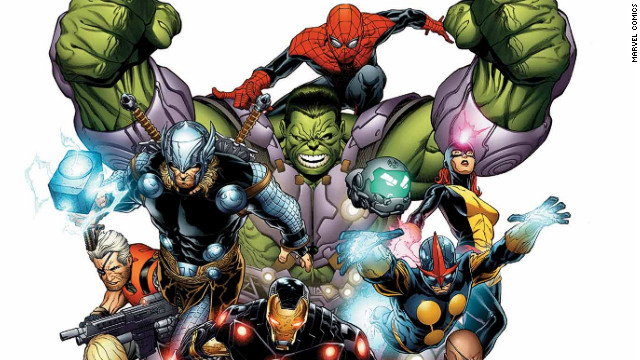 Despite what can be an overwhelming movie and TV slate at Comic-Con, many attend the convention due to a lifelong love of comic books.

"I've been a fanboy since I was four or five. Everyone is here in one giant house," said freelance writer Daniel Kohler of Riverside, California, who brought along his young nephew to share in the experience.

"It's easy to talk to people. There are no strangers here."

And what diehard comics fans are talking about as the Con ramps up is Marvel Comics' restructuring. On the heels of DC Comics' (a Time Warner company, like CNN) successful though controversial New 52, Marvel is relaunching many titles - and ending a few as well - in October. The initiative is called "Marvel Now."

After a year in which companies grabbed mainstream media attention through relaunches and sexual orientation stories, for the average fan writing, art and interesting characters are what's actually newsworthy.

"I think all the media attention (even though some of it may seem contrived) – will hopefully help to keep the big movies in Hall H from overshadowing the incredible work being done on the show floor by astoundingly talented writers and artists," said "Heart" creator and G4 TV comics guru Blair Butler.

“The best part is just being in the middle of the center of the universe. It’s great to talk to creators and get a feel of the pulse of the industry live on the floor of Comic-Con." Dynamite Comics founder Nick Barrucci said.

And this year, independent comic book companies are moving even further away from traditional comic book superheroes and towards other genres - especially horror - after the success of Robert Kirkman's "The Walking Dead."

Dark Horse, the publisher of "Star Wars" and "Buffy the Vampire Slayer" is returning the spotlight to a fan favorite in "Hellboy Goes to Hell," which may end up being one of the tamer horror titles they are discussing at Comic-Con.

Image Comics is indeed banking on "superhero-ed out" readers, not only with Kirkman's "The Walking Dead," (Kirkman has been called the "unofficial mayor of Comic-Con") but with books like the spy-fi "The Activity."

The title's seventh issue, out next week, was co-plotted with actual Navy SEALs. Writer Nathan Edmondson, attending his first Comic-Con, said he calls upon experts for each issue.

Butler said she was most looking forward to new work by cartoonists Kate Beaton ('Hark a Vagrant') and Alison Bechdel ('Fun Home'.)

"Both are acclaimed indie creators and two of the most original and unique talents in the industry – so if you’re 'superhero-ed out,' please, do yourself a favor and check out their books," she said.

Whether or not today's comic book landscape actually does have readers "superhero-ed out," there's one super villain Comic-Con attendees are excited to see. The Joker is returning in October after a long hiatus in the comics, with a "different look and different mission" according to writer Scott Snyder.

It’s clear that for veteran Comic-Con attendees, it doesn't matter how many movies, TV shows or video games come and go. It's always about the comics.