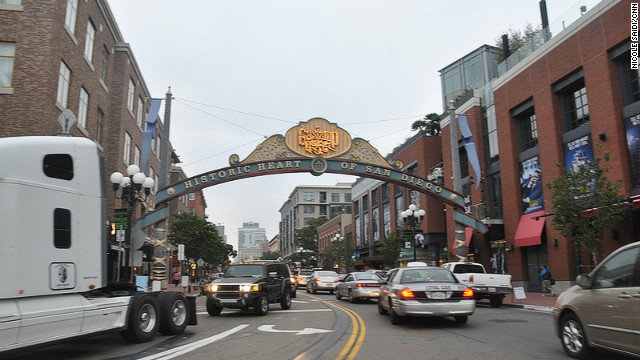 While crossing the street against oncoming traffic that had a green light, Gagliardi tripped and fell against a moving car. She died en route to the hospital.

Although not confirmed by San Diego authorities at this time, Gagliardi's identity was established by friends who noted she was a compatriot in the Twi-hard contingent. She went by @mad4hugh on Twitter and described herself as a "Lover of in no particular order: Twilight books, movies, etc., Hugh Jackman, Robert Pattinson, travelling, NYC, Australlia, cats...."

As more and more people attend Comic-Con, lines for panels have grown exponentially longer. The process for acquiring tickets and hotel rooms has become a complicated dance of online forms, refreshed browsers and lottery systems. And any return attendee can tell you, the snarl of automobile and pedestrian traffic around the convention center and the adjacent Gaslamp District is at once confusing and infuriating.

The fact that such a tragedy happened in the run-up to one of the most exciting conventions known to fandom has plenty of attendees soberly focused on the possible dangers to pedestrians - who can certainly be less than alert in the exhilaration surrounding Comic-Con.

iReporter and Comic-Con veteran Alan Kistler told CNN, "I think we're already seeing yet another clear sign that there needs to be some changes in how certain things are run."

"People started lining up for Hall H on Monday," he said. "Not only is that absurd, it's already proven to be dangerous as one person has actually died. Yes, she was jay-walking and didn't have the right of way. But I don't think she or anyone else should have been allowed to line up so early anyway. It's absurd and it's not a place free of traffic."

Twilight fans, especially those prepared to sleep outside for days as they wait to see the stars from their favorite franchise at Comic-Con, are a tight-knit group. Comic-Con has been a rewarding venue for them, but not always a welcoming one. Their presence at the convention for the last few years has been met with plenty of grumbling and consternation from fellow attendees who prefer superheroes to sparkly vampires.

A pervading attitude from other Comic-Con attendees that Twi-hards don’t count as nerds and don’t belong at The Con only highlights this fan group's steadfast and unabashed passion - leaving no doubt that they are in fact, fans, and therefore do, in fact, belong at Comic-Con.

Gagliardi wasn’t a teen girl, the sort of fan most outsiders assume to be a Twi-hard, but an adult with a career as an accountant. But she was behaving like a fan – camping out days in advance on a line, interacting with fellow nerds and geeking out about something she loved

Any nerd can relate to the fervor that takes over when you’re holding territory and waiting, waiting, waiting to see the first midnight showing on opening night, find the chase figure, collect the rare issue. It's hard to imagine such a tragic end to such a hopeful scenario.

"Twilight" fans are reeling from the news of Gagliardi's death. So are many other fans, who save money for a year in order to travel to San Diego, buy a ticket for Comic-Con and revel in four days of intense consumption of comic books, movies, television shows and schwag.

Comic-Con is an institutionalized affirmation of the things attendees love. It's an opportunity for up-close access to celebrities and to commune with more than 130,000 like-minded fans. It's a chance to be proud of the happiness these things bring, instead of being shamed for liking a character or a story to such an extreme degree.

While fans are steeling themselves against the chaos, they’re also remembering one of their own who was lost to it.

Hitfix.com writer and resident film geek Drew McWeeny tweeted, "Be careful in San Diego this weekend, folks. Nothing they're showing at ‪#SDCCis worth dying over."

Fans created the #RIPTwiFanG hashtag and expressed condolences to Gagliardi’s family, as did “Twilight” actress Nikki Reed and Summit – the studio behind the vampire films. A fundraiser to assist her family with funeral costs has already begun, and fans are circulating a petition for a moment of silence during the Thursday Twilight panel.