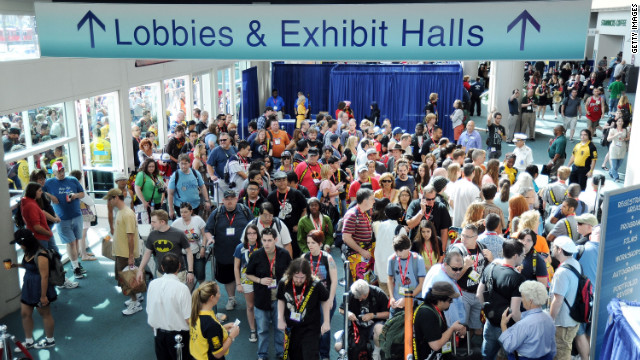 Comic-Con wrestles business out of chaos

If you don't have some reaction to San Diego Comic-Con International you're not participating in popular culture.

What began more than four decades ago as an intimate gathering of comic book creators, fans and legends has become a packed entertainment event. Although it doesn’t have the same ring to it, Comic-Con could more appropriately be called the Transmedia Pop Culture Con where buzz for a year’s worth of projects is created, prolonged or squelched.

Yet, despite the awareness that the con is a giant marketplace where producers sell directly to customers, there has been shockingly little analysis of the business of the event before Rob Salkowitz’s new book, “Comic-Con and the Business of Pop Culture.”

Seated at a conference table at the McGraw-Hill building in Manhattan, Salkowitz delved deep into his nerd-business theories.

A futurist and business writer, Salkowitz approaches "The Con,' as it is known in nerdy circles, as more than just a meeting ground of Hollywood suits and 130,000 fans. Instead, he calls it a “laboratory in which the global future of media is unspooling in real time,” where people participate in their entertainment instead of just consuming it.

Salkowitz writes that Comic-Con can actually teach some important lessons about challenges facing all creative endeavors in our globalized, digital world, but he does so from the perspective of a comics nerd who attended his first con when he was eight.

“In fact, I learned to read and write from comics, and I learned, basically, the fundamentals, of visual communication,” said Salkowitz. He strayed from the church of comics for a time as an adult, but returned to it and attended his first San Diego Comic-Con in ’97. After he ended up in a game of Five Card Nancy (based on the Ernie Bushmiller strip, and created by Scott McCloud) with McCloud, Kurt Busiek and Will Eisner, you could say he was back in the congregation.

Salkowitz’s nerd cred makes him the ideal candidate to examine The Con’s moment of “Peak Geek,” where comics culture is at a maximum saturation level, and to make some educated predictions of what happens next.

Without slipping into a dull business discussion about something like a Trade Federation dispute, Salkowitz acknowledged that Comic-Con's environment consists of consumers who are simultaneously fans and co-creators in a business fueled by talent.

“At the highest level, this is a book about this industry that started out at the fringes of culture and of business, and over 25 years, it came to inhabit the center of both of them,” he said. He called The Con a “triumph of the nerd story,” but added “the 2011 Con felt to me like Europe in 1914, right before everything blows up.”

He added there is always the risk that Hollywood might move on from The Con, because that industry is interested in making hits - a hard thing to manufacture. Even if a movie like “Scott Pilgrim vs. the World" connects with fans, and is true to the source material, it may not connect with the mass media (it didn’t). Even if lesser-known characters like Iron Man can be the focus of a successful franchises – and lead into the mega-successful “The Avengers” – that doesn’t make “Green Lantern” a sure thing (it wasn’t).

“Maybe popular culture gets sick of this and the moment passes, and in a few years, comics are like disco,” he said. “A lot of people are looking back are going to say, ‘Wow, that’s really strange that was so popular’ and comics either go back to being this nerd niche … or become just like jazz.”

That’s why Comic-Con has decided to embrace brands like “Twilight,” he said. If Comic-Con can get a younger generation to build memories that way, it could guarantee fans return to the convention 30 years from now for nostalgia's sake.

Salkowitz sees Comic-Con in a state of mid-jump over the shark. Much of the event's celebrity component lacks “meaningful activity,” he said, but there is also a “very authentic, historically-focused” aspect of creators trying to do real work.

Enter "nerd media." While companies want to attract the raving comics fans who attend The Con, those fans are not zombies, Salkowitz said. They talk back and participate, and can’t be taken for granted.

Having someone like Chris Hardwick or Harry Knowles behind an entertainment company's project adds credibility – unless it begins to look like those nerds are so integrated into a marketing and publicity machine that they’ve been corrupted. If that happens, there will be at least 10 other grass roots websites ready to emerge from the basement and take their place, Salkowitz said.

Looking forward, Salkowitz the business writer wants to observe the impact of digital comics at the 2012 Comic-Con more than anything else. He said he’s interested in seeing if the direct comics market can survive, and if retailers will be able to participate. Also, in a situation where anyone can be a publisher now, but the value is placed on the distribution, he is curious how things play out when everybody has an incompatible format.

Salkowitz the nerd, meanwhile, is excited about the “deluge of good vibes” that comes with walking into a room filled with 130, 000 people having the time of their lives. He added that that’s the side he really wanted “Comic Con and the Business of Pop-Culture” to be about.

“There’s always going to be the terrible commercial aspect,” said Salkowitz. “At the end of the day, people are interested in this stuff because of the stories, because of the characters, because it captures our imagination, because it’s well told and well executed. … It’s people that are doing that, and not the people at the top of the companies.”