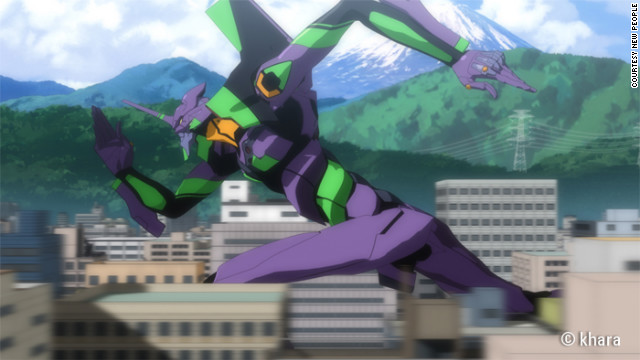 "Evangelion's" characters are the main focus of the story, Cerrato said, but the way fans relate to the characters is part of the show's enduring strength.

"The interaction of Shinji Ikari, the series' protagonist, with his father Gendo, is what drives the larger story elements," he said. "Shinji is portrayed as being very weak, very human. He struggles with his role as a creation and how that fits in with his creator's will. How he does flesh that out is with the interactions with his fellow Evangelion Unit pilots, Rei Ayanami and Asuka Langley Sohryu."

"Ironically enough, how he deals with these interactions drives part of the fan response. He isn't a role model because vulnerability is not as asset in the Japanese cultural mind. The fact that he shows weakness, even given the circumstances, isn't a trait that people want in a hero. They want someone that is strong, resolute and believes strongly in their own convictions."

"Evangelion" is also known for its religious overtones, which have given fans fodder to discuss the show's deeper meanings for many years.

The two main Angels are known as Adam and Lilith, named after the first man created in the Book of Genesis and the first woman in the Jewish mythology.

"Eva is a bit weird when it comes to religion," Cerrato says. "It's really there as a vehicle that represents the battle between creator and their creation.  The use of Judeo-Christian symbols as an identifying mark of an enemy is evident of Eva's rebel streak. The series' title was actually changed for the American release from 'Shin Seiki (New Century) Evangelion' to 'Neon Genesis Evangelion' to further press that theme."

Kazuya Tsurumaki, the assistant director for "Evangelion," was quoted in an article as saying that the religious bend was a conscious choice to give the show an edge against other giant robot shows, but that the show has no actual Christian meaning. It's for this reason that Cerrato believes that "Evangelion" is not quite the paragon of anime that fans believe it to be.

"While its fanbase at times will declare Eva as a great series for being deeply thought-provoking and challenging religion, in my mind, Eva merely used this as a sort of naming convention," he says. "It fit with the narrative. It looked cool. But Evangelion's religious themes are not an indication of its overall intellectual value. Some fans may cling to this as evidence of its philosophical value."

The characters are also heavily flawed beings, struggling with the scars of past traumas that unfold as the show progresses. Creator Hideaki Anno has openly admitted to suffering from clinical depression before creating "Neon Genesis Evangelion," which some fans theorize as the source of its dark themes.

"Evangelion is my life, and I have put everything I know into this work," Anno said in an interview with Protoculture Addicts. "This is my entire life. My life itself."

"The surface plot of Evangelion - motherless kids trying to save the world from a mysterious threat by piloting giant robots - is really only a vehicle for subtext," says Leigh Alexander, digital culture writer and editor-at-large at Gamasutra.

"Eva is about the lessons of adolescence: how painful it is to be in the world, how being close to others is just as frightening as being alone, and how adults don't always have the answers. A lot of teens are drawn to these themes - at that time in their lives, interpersonal relationships and a strong sense of self seem as shrouded as religious mysticism.  For a lot of people in my generation, Eva was a friend during a very confusing and lonely time."

And yet, still discussed by fans is how confusing "Evangelion" was at the very end of the series. Alexander said fans who watch the series a few times over and dig into the show's lore might be able to parse out the obscure plot ending: "Some international council wants to enact a prophecy that turns humanity into one unified soup," she said. "But this weird twist is just a vehicle to our hero's musing on the nature of ego - the border between ourselves and other people - and why it's desirable to have your own identity even if it hurts sometimes and keeps others away from you."

It's a message buried in confusing symbology, she said, which makes it a controversial ending in the "Evangelion" fan community. But "the emotional subtext is palpable," she said, "and people cheer for these kids' self-discovery more than they do for the salvation of the world."

Whether the religious and dada-esque ending bits were added for deeper resonance or merely for show, they worked. The Japanese market is still flooded with "Evangelion" merchandise, and new collectibles come out every day. Fans still show excitement for events.

This is telling, since it points out that regardless of what the creators intended for the show to mean, the way that fans interpreted it seems to be what truly matters in the end.