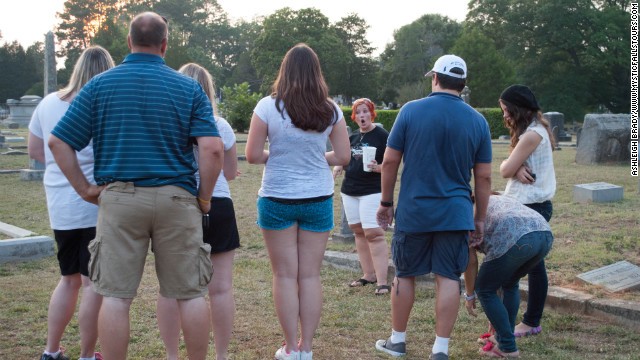 In fact, one of the most surprising parts of the tour may be that some of those sets are still fully intact, in downtown Atlanta. Chains used to keep the zombies out of the fictional store Bradbury's (where Andrea debates stealing a mermaid pendant for Amy in episode 2) are still wrapped around the logoed doors.

One of the show’s most recognizable locations, the Nelson Street bridge -  the eerie post-apocalyptic looking bridge that Rick (Andrew Lincoln) rode his horse across – has delighted many fans on tour. But bustling cities like Atlanta are always evolving and expanding, and that’s a fact Burns and Davis have to deal with. The Nelson Street bridge is set for demolition this summer, so the Big Zombie Tour will have to leave it behind.

Even so, tours like these allow fans to view filming locations that the general public does not have access to, like the quarry seen in season 1 of “The Walking Dead.” The quarry location was actually just rented out by J.J. Abrams for filming his new NBC pilot “Revolution” which premieres on September 17th, doubling its fan voyeurism factor.

"As movie and television fans ourselves, we are thrilled that so many productions have fallen in love with our beautiful city and state. To be able to share Atlanta with visitors through Atlanta Movie Tours is icing on the cake," Davis said.

There are a number of businesses around the country that are capitalizing on fandom. In addition to on-the-ground, guided fan tours like the ones in Atlanta, there are also fan sites that research filming locations across the country, offering lists of fan-friendly tours for a more DIY approach.

For example, fans of "Dallas" can tour Southfork Ranch in Dallas, "Sopranos" fans can check out "Sopranoland" in New Jersey, and "Supernatural" fans can take their own tours of locations used in seven of the show's seasons in Vancouver.

In Georgia's case, tax incentives have lured Hollywood to the south and made businesses like this a reality for local fans. Thanks to The Big Zombie Tour’s success, Atlanta Movies Tour is adding additional tours to their line-up, including one for Bravo’s “The Real Housewives of Atlanta.”

There's more than just zombie love in Atlanta though. “The Vampire Diaries” also has a rabid fan following (the series’ stars have over 2 million followers on Twitter) that loves to visit the set. That devotion has turned out to be a great business for Jessica Lowery. Since season one of the hit supernatural drama, she has been running Mystic Falls Tours which takes fans to some of the series’ exterior sets.

Lowery simply wanted to share her passion for the show with other fans, and that comeraderie inspired her to start the business.

"We had a strong following on our Vampire Stalkers website and wanted others to get to see the cool things we get to see on a daily basis." Lowery explained.

Lowery began Mystic Falls Tours with just a couple tours a week. Now she hosts two to three tours a day, with six to 12 customers per tour. Mystic Fans from as far away as Australia and Austria have come to Atlanta just for her tour. She’s already hosted fans from every single state in the US this year.

Not only have highly trafficked fan sites recommend Lowery's tour to fans – but so has the cast.

"Ian Somerhalder actually endorses our tour which is super cool. Kat Graham and Ian have both came out to see fans for us and say hi." Lowery said. "This doesn't happen all the time, but is super cool when it does."

Lowery admits that “The Vampire Diaries” production’s support not only makes her job easier, it also helps the fans feel more included.

"I couldn't believe it when I learned ‘Vampire Diaries’ filmed only a couple of hours (away) from me," Birmingham, Alabama-based fan Caroline McCormic said.

"When you live in Alabama, you don't usually get a chance to visit the set of your favorite TV show. It was really fun to visit the various outdoor film locations and see what they look like in real life. It felt like walking into my TV set," she said.

At the end of the day, that's all fans really want – to feel connected to the characters and shows that they love. If they can join in the magic, then they, too are a part of the stories that they love.