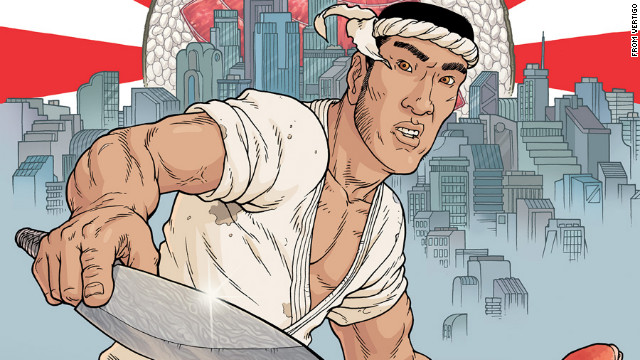 Throughout the years, Anthony Bourdain has been cast as a punk-rock chef or as a food snob who will say anything to stir up a controversy.

For some he is the taste-making adventurer behind Travel Channel’s “Anthony Bourdain: No Reservations,” the eight-season strong series where globetrotting is experienced through a cinephile’s eye, an audiophile’s ear and a gastrophile's stomach. Still others just think of him as that dude who ate warthog anus that one time.

But actually, Anthony Bourdain is a nerd.

Just as a comic book nerd can obsessively debate the merits of publishing companies, artistic elements, story arcs and creators, Bourdain is a food nerd who knows his restaurants, ingredients, dishes and chefs. He is a collector and communicator of food data, and you can add movie, music and, yes, comic book nerd to his list of labels as well.

This isn’t exactly groundbreaking news. Bourdain uses his literary confessional “Kitchen Confidential: Adventures in the Culinary Underbelly” and “No Reservations” – along with his blogs, essays, books, writing gig for HBO’s “Treme” and presumably his upcoming weekend show on CNN – as a playground to sate big-kid wishes and hang out with icons like Alice Cooper and Harvey Pekar.

Now he is finally able to pursue a successful fanboy’s dream of writing a graphic novel for DC Comics. Published through the Vertigo imprint, Bourdain’s “Get Jiro!” is a satirical thriller set in a “not too distant future” where master chefs are mob bosses who pull the strings of power in Los Angeles.

(DC Comics, like CNN, is owned by parent company TimeWarner.)

The comic's two ruling “families” are the food-savvy but withholding “Internationalists” (led by an Alain Ducasse-meets-Robert Irvine kingpin) and the hypocritical locavore “Vertical Farms” (led by a pretty obvious Alice Waters stand-in). While the outer rim of the city is loaded down with obese, fast-food-gorging denizens, the inner rim is a place where a reservation at primo joints is a sign of influence. Then there’s Jiro, a mysterious sushi chef who wishes only to serve his culinary craftsmanship without getting caught up in the politics of the kitchen crime world.

Co-written with Joel Rose (“La Pacifica,” “Kill Kill Faster Faster”) with art by Langdon Foss (“Heavy Metal”), “Get Jiro!” is like “Ratatouille” meets “Kill Bill: Vol. 1,” where deliciously gratuitous violence is juxtaposed with painstakingly accurate food nerd details. And Bourdain’s commentary about celeb-chefs and our food culture is about as sharp as Jiro’s tanto knife.

Bourdain joined me over some blood sausage and a Heineken at Brasserie Les Halles – the Downtown Manhattan restaurant where he served as executive chef and remains chef-at-large – to discuss “Get Jiro,” his fanboy bona fides and his upcoming appearance at San Diego Comic-Con.

CNN Geek Out: Why are you entering this world of comic books?

Anthony Bourdain: I was a serious comic collector and fanboy as a kid. I wanted very badly to draw comic books for a lot of my childhood and early adolescence. So when you have an unfulfilled dream like that, when years later you find yourself in a position to make a graphic novel – hell yeah, I’m going to do that.

CNN Geek Out: Let’s establish your nerd cred. What comic books did you, or do you, collect?

And yet, I quickly became aware there was this whole, nasty world from the ’50s, and I hunted that stuff down. Also, Will Eisner’s “The Spirit.” When the undergrounds came along, the West Coast stuff, it totally blew my mind. And I liked early Marvel, when Spider-Man was still neurotic and Steve Ditko was still doing him. There was also a period in the ’60s where people like Jim Steranko and Barry [Windsor-Smith] were really changing the game. You had four-page splash panels. People were doing psychedelic themes, and riffing on various styles. Comics suddenly became really interesting, so I read those on a contemporaneous basis while also collecting dark, violent, antisocial stuff from the ’50s.

And my father had turned me on to Will Eisner and “The Spirit,” and the Jules Feiffer collection – so I was reading that stuff as well.

CNN Geek Out: For “No Reservations,” you’ve always relied on a cinematic quality for episodes, so you did the same for the comic?

Bourdain: Will Eisner was famous for framing and pacing his panels like early Orson Welles or early noir directors. It was really moody, and he’d use lighting and black-and-white in a way that really added drama to the story, and pace. Obviously, those were influences. I just want to tell a ripping good yarn with lots of blood in it, with food that’s ridiculously correct. And a satirical, humorous element was desirable.

CNN Geek Out: You’re presenting “Get Jiro” to Comic-Con, and that’s become a venue where every pop culture entrant goes to sell their wares. Is there any concern that people will think you’re just cashing in on the trend?

Bourdain: The minute you emerge from your cellar with a guitar, and play for another person, arguably, you’ve sold out. I mean, is anything pure? To quote that great man, Omar Little [from “The Wire”], “It’s all in the game.”

Preying on the hopes and dreams of fanboys is the very backbone of the comics and newspaper industry dating back to 1939 – and certainly the backbone of the music industry. In fact, I can’t think of an industry that’s not the backbone of. So yeah, I don’t have an ideological problem with, “Wow, these people are keeping it real.” I mean, there’s a 120-fucking-thousand of them out there. I was at a comic-con back in 69, one of the first years, at the Pennsylvania Hotel, across from Penn Station. It was a room about twice this size with a bunch of guys who looked like Comic Book Guy, with some boxes and folding tables. Were those the good old days? I don’t think so.

CNN Geek Out: Have you had any stand-out DC Comics/Vertigo moments since you signed on?

Bourdain: Yeah, they gave me a really big stack of very cool books. Swag! At the end of the day, I’m a super nerdy fanboy.

CNN Geek Out: Since the food in “Get Jiro” is so accurate, could we expect a spinoff recipe book?

Bourdain: I’m not qualified to tell people how to do the food that Jiro makes. I’m qualified enough to eat it, and in a general way, say if it’s really good or really, really, really good. But I’m not an expert. It’s an incredible testament to the work that Langdon Foss did that he got the artwork so right and so careful.