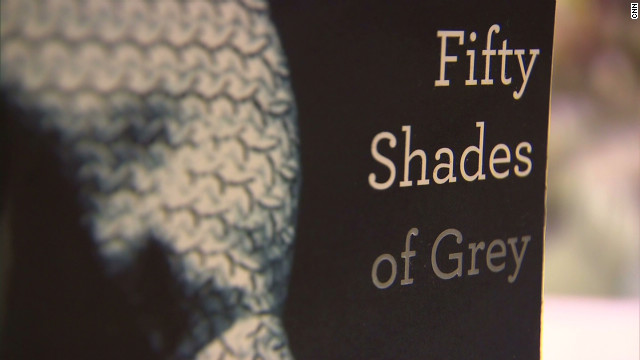 Fifty Shades of Confused: Why do people like this book?

A few weeks ago, I heard the sort of whispered murmurs in my local bookstore that are reserved solely for people who want to buy books that they don't want other people to know they are buying. Furtive glances and giggles echoed back as happy customers walked out the door, peering into the brown paper bags containing such worthwhile literature.

Interest piqued, I asked the clerk what book the women had purchased.

I was a bit late to the party, admittedly. The novel came out last year and has since drummed up a tremendous amount of attention. A British author named E.L. James penned it as "Twilight" fanfiction at first, then rewrote it with original characters. It tells the story of  a young, inexperienced woman and an older man with a taste for whips and chains. It's like the "Twilight" craze all over again, but with less supernatural creatures and more bondage gear.

I thought I got why everyone wanted to slink out of the store with this book. I spend plenty of time appreciating Japanese and Korean male idols, and I love their sexy photo shoots. "Fifty Shades of Grey" has lots of titillating themes: hot people having hot sex, wish fulfillment, virgin and master. What's not to like?

Christian Grey, the novel's central male character, is already a popular heartthrob, despite the fact that fans haven't seen his face outside of their imaginations. And when some hopelessly sexy actor plays him in the film adaption, Grey will skyrocket off the charts as the hottest fictional dude since Edward Cullen.

So why is this guy in so many women's fantasies? And what's the big deal about "Twilight with sex," as "Fifty Shades of Grey" has commonly been called?

Part of the answer lies in fanfiction itself, and the fans that create and consume it.

"I read fanfic mostly for the sense of voyeurism involved, " says Crystal White, professional illustrator and fanfic reader. "I often read fics about characters I'm emotionally invested in. They allow me to observe behaviors and actions that those characters would never normally exhibit within the confines of their original medium. It humanizes these characters, and makes you feel like you know them on a personal level."

White says that the dramatic tone of fanfic is a big part of its appeal.

"A lot of it is written by teen girls locked in their rooms obsessing over whatever character they're writing about, and these fics often tend to be an allegory for their emotional ups and downs. When I'm reading a fic, I'm not looking for classical literature. I'm looking for depression, hate, drugs, sex, abuse, love, death, injury. It's these extremes that stir up an emotional response."

If fanfic is at "Fifty Shades of Grey"'s heart, then sex is at its groin. And it's not just sex, but kinky sex, which makes it all the more taboo. Does this mean we all secretly dream for weirder adventures in the bedroom?

Robichaud says Christian Grey is not attractive because of his role as a dominant, but because of a larger part of the picture.

"If reading 'Fifty Shades of Grey' allows someone to connect with a part of themselves for reasons they would normally ignore, for any reason societal or otherwise, that's positive. Read it, recognize it as fiction, connect it with yourself. But then, dig deeper."