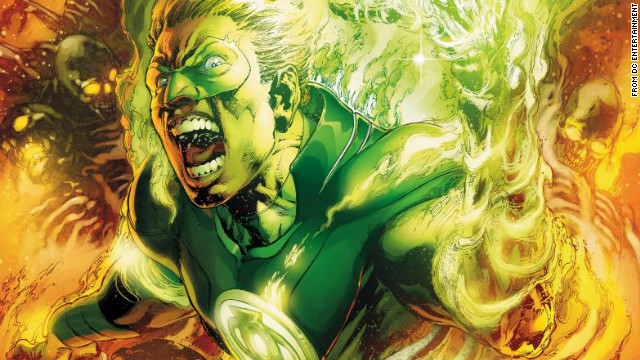 After DC Comics made it official that Green Lantern Alan Scott is gay, the reaction from the Trolliverse was as predictable as it was ridiculous. On Facebook, a friend hilariously mocked the all-caps, incorrectly punctuated outrage thusly:

It’s safe to say that those people didn’t pick up “Earth 2” No. 2 last week, when Scott made his debut in the relaunched DC Universe. Gay characters in mainstream comics aren’t new, but DC took a chance in changing the sexual orientation of an established character like Scott. Before the relaunch, he was a middle-aged hero whose son, Obsidian, was gay.

The coy, press-baiting runup to the announcement is another matter.

To be fair, DC didn’t make a big deal out of it initially. The site Bleeding Cool reported that, in response to a question about LGBT characters at London’s Kapow comic book convention, DC Co-publisher Dan DiDio said a yet-unnamed, existing straight character would be relaunched as gay in the new 52. Speculation was inevitable.

But then the company started using words like “mystery” and “big upcoming twist,” giving the whole thing a tacky, Where’s Waldo? quality. DC also said the character would be iconic, but that turned out to be a stretch. An icon is someone that the average person on the street recognizes. Let’s be real here: Scott is well-known to people who read comics, but he isn’t Clark Kent or even Hal Jordan. To get really technical about it, Earth 2 isn’t even main continuity but a parallel universe.

Around the same time, Marvel made headlines of its own with the news of X-Men character Northstar’s marriage to his boyfriend, Kyle. (Marvel revealed that Northstar was gay in 1992.) Given the ongoing debate in this country over gay couples’ right to get married, one could argue that this event is at least topical, and comic book nuptials have been the subjects of news releases before. But in the case of Scott, should the mere fact of a character’s sexual orientation be the subject of a teasing publicity grab? Why not just let the character speak for himself and then let the blogosphere go to town?

Sure, Archie Comics got plenty of attention in 2010 after introducing its first gay character, Kevin Keller, who wed his boyfriend in the alternate-reality “Life with Archie” series. But considering that Archie Comics hadn’t exactly been known for risk-taking and there were no gay characters in Riverdale previously, Kevin’s arrival seemed legitimately noteworthy.

Brian Andersen, a pro-LGBT independent comics creator and longtime comics reader, said that while there is an element of exploitation in DC’s actions, there is also an upside.

“Do I view this exploitation as a terrible, awful, negative thing? Not so much,” Andersen said. “If only because, in the long run, whether it’s with these recent ‘big gay additions’ to mainstream comics being tossed into the superhero stew for monetary reasons or publicity’s sake, or because of a genuine desire to better reflect our current culture … the end result will eventually lead us down the same path and to the same destination: widespread acceptance and support of LGBT people.”

And for all the trolling, there’s evidence that this is already happening. In a case of the Internet being awesome, fans overwhelmed the One Million Moms Facebook page with pro-DC sentiments after the organization posted a warning (their words) about Green Lantern being gay. DC’s Batwoman, who is lesbian, was so well-received after her 2009 debut in "Detective Comics" that she got her own ongoing title. Same with Keller, who became an Archie fan favorite.

Andersen said the introduction of gay superheroes remains groundbreaking and newsworthy for a couple of reasons. They remain rare in mainstream comics. That they exist at all comes as a surprise to bystanders who assume, incorrectly, that comic books are a kiddie affair. Just as the creation of African-American characters in the 1960s and ’70s reflected the nation’s cultural evolution — even with the cringe-inducing names — so does the growing visibility of caped crime-fighters who happen to be gay, he said.

“For us long-term homosexual comic book geeks, it’s great to see not just a gay hero in our favorite form of literature but also a gay hero with a romantic life, one where they get to share a few on-screen smooches … finally,” Andersen said. “I, for one, welcome the exploitation for now because, it is my fervent hope that in five years or so, this cultural gay hoopla will be so pedestrian and boring that it will barely be worthy of a raised eyebrow.”