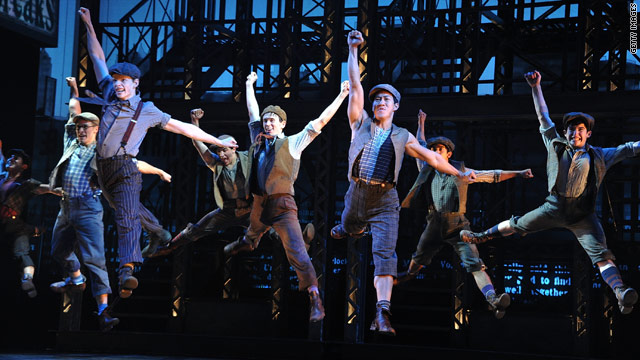 After years of begging, fans of Disney's cult favorite film "Newsies" finally got a Broadway adaptation this season.
June 8th, 2012
08:00 AM ET

For Broadway fans, a moment in the sun

Broadway has always had hardcore fans, of course. But as much as the true theater dorks (among whom I count myself!) might hate to admit it, musical theater is now, well, sort of cool. And profitable.

Musicals are where it's at. Wonderful World of Disney lovers are leaping to get tickets to "Newsies," which was nominated for eight Tonys. And every celebrity wants to gain some street cred by starring in a Broadway show: Daniel Radcliffe showed he can dance (if not sing) in "How to Succeed in Business Without Really Trying." And Christie Brinkley (yes, the uptown girl herself) is starring in "Chicago."

I trace this surge in popularity back to 2006's "High School Musical." Sure, I despised it (and the endless sequels) with a fervent passion, as any true musical nerd would. It turned our beloved world into a pop singer-filled, Disney Channel-style, teenybopper show. But it served a purpose: It turned a new audience on to how much fun musical theater really can be.

And then we entered the age of "Glee. "