Part of the "DC Entertainment Presents: Watchmen -It's Not The End, It's the Beginning," presentation at the Los Angeles Times Festival Of Books.
June 6th, 2012
02:11 PM ET

'Before Watchmen:' Watching the controversy

Editor's Note: Vanessa Gabriel is a Florida-based writer, and the co-creator of the comics blog Girls-Gone-Geek.com.

Even if you are not a regular at your local comic shop every Wednesday, there is a good chance that you have heard of “Watchmen.” For longtime comic fans, “Watchmen” has a biblical status. Since its publication in the mid-‘80s, the controversy surrounding Watchmen is as legendary as the book itself.

At a time when comics were overcome with mutant superhero teams battling with the evils of their fictional worlds, Alan Moore and Dave Gibbons’ “Watchmen” was an unprecedented social commentary on the anxieties of the real world. The artistic structure and thought-provoking content made creative, critical, and commercial waves that have extended through the decades.

At the time, Moore and Gibbons signed a contract that gave DC Comics rights to “Watchmen,” with the rights (and subsequent revenue) reportedly returning to them when the book went out of print. But the success of the title was also unprecedented, and unexpected. Thus, DC has never stopped printing it. Moore has been unabashedly vocal over the years about this (and other) perceived injustices, “You have managed to successfully swindle me, and so I will never work for you again.” Moore isn’t the only one. 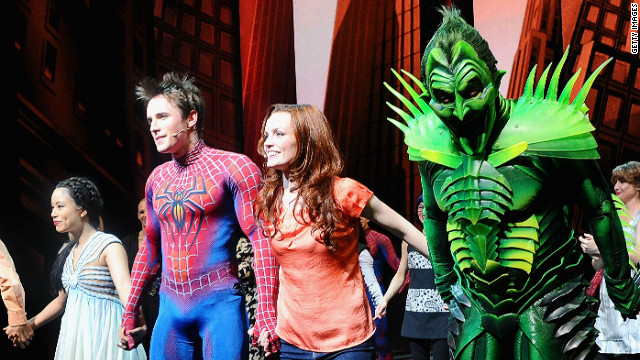 Despite what most would agree was a particularly rough start in previews, "Spider-Man: Turn Off the Dark" seems to be having the last laugh, breaking Broadway records, with nearly a full year under its belt as one of the most popular shows on the Great White Way.

It's the latest in a series of geek-friendly musicals, including the Tony Award-winning "Spamalot" and Mel Brooks' "Young Frankenstein."

Shows with a large audience in nerd culture are nothing new, take "The Rocky Horror Show," for instance. But a major touchstone for the modern geeky musical has to be "Wicked," which almost 10 years into its run, remains one of Broadway's biggest draws.

Before "Wicked," however, the idea of geeky, fan-favorite genres making great musicals was hardly a given. "Science fiction in particularly has had a bad rap in the theater for decades, but only because it's been rare to have a sci-fi show of great success," Taryn Kimel, with the fan-driven "Spidey Project," said.

"I think there are plenty of shows now considered classic that people likely wouldn't have considered stage-worthy if they only heard a summary. ('Sweeney Todd' definitely comes to mind. Horror is an example of a genre that's become more accepted in the theater,)" she said.

What seems to be even more relevant to the established Broadway community, said "Project" writer and actor Justin Moran, is the fact that geeks in general are more receptive to different methods of storytelling - which makes them natural converts into the world of musical theater.

"I was totally against musicals and musical theater," said Adam Grumbo, who runs the fansite WitchesofOz.com. "I always thought it was exclusively for teen-aged girls, flamboyant guys, and well-off philanthropists. I was hooked after the first viewing [of 'Wicked'], and I've been to dozens of musicals since." END_OF_DOCUMENT_TOKEN_TO_BE_REPLACED