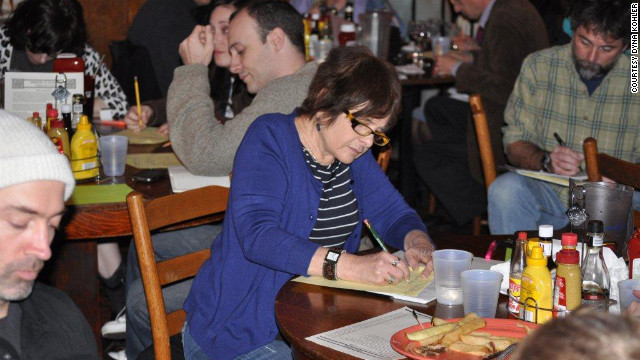 There's something about compulsion, the competitiveness of reading the dictionary every night and only being in it to win it that disturbs writer, editor and self-described word nerd Ed Hall.

Hall is part of a community that derives joy from words — orthology hobbyists who gather for low-stakes, adult spelling bees.

Adult spelling bees, like the one hosted by AARP, the National Adult Spelling Bee in Long Beach, California, and the long-running Atlanta Open Orthographic Meet, are held across the nation.

Some of them look a lot like the Scripps bee, with contestants wearing pinned-on numbers and spelling steadily into a microphone. Others are deliberately more laid back.

Since 1971, beer-drinking word nerds in Atlanta have congregated in a local bar once a year to see who can spell the best. Instead of lining up and spelling the words out loud, the Orthographic Meet consists of four rounds of a written spelling competition.

With number two pencils and yellow legal pad paper, word nerds spell each word the committee members read aloud, like teachers giving a pop quiz. Participants grade their own papers, and those who spell the most words correctly in each round have their papers double-checked by committee members. Whoever spells the most words correctly wins a beer stein with his or her favorite word from the competition engraved on the front.

After her win in 1986, Dyna Kohler joined the committee that chooses the words every year for the Orthographic Meet. The competition's difficult words often sound more like sneezes than conversational language, requiring a clear, practiced pronunciation by Kohler and other committee members.

Words like: Mkhedruli - an alphabet developed in the 11th century, nudiustertian - of or relating to the day before yesterday, plethysmograph - an instrument that measures the changes in volume of internal organs, or rijsttafel - a Dutch adaptation of an Indonesian feast. These days, Kohler said the words are more of a draw than the alcohol.

Word nerds have a unique relationship with language. Some, like Kohler, find their brains are specifically wired for words.

"I have a good visual memory of a word," Kohler said, "but once I was assigned a phone number at work and it took me three months to learn it because when I tried to visually remember it like I would a word, all those round numbers all blended in."

Word nerds generally love to read, are devoted to the pastime from an early age and many end up in writing professions, she said. But often enough, their devotion to words bleeds through into everyday interactions.

It's easy for word nerds to recognize one another. "If they can use 'comprise' in its old form (wherein the whole comprises the parts, rather than the understandable but nonsensical newer form, which confuses 'comprise' with 'compose') or applaud my doing so, I know I'm addressing kindred spirits," Hall said.

Also common in the word nerd subculture is a passion for specific lexicons, Hall said. The number and variety of dictionaries one owns distinguishes a word nerd: Hall prefers the "American Heritage Dictionary."

So how fierce is the competition when word nerds meet? It’s pretty congenial, actually.

"I have friends who don't do well (at the Orthographic Meet) but still come every year because they think the words are fascinating and it's fun," Kohler said. Over the years, Kohler noticed that the kind of people who participate in the Orthographic Meet enjoy learning new words. People are hooked by the definitions of the rare words the committee includes in the competition and return year after year to learn more, she said.

Myrmecochory is Kohler's favorite word from the fourth round of this year's competition. "It means dispersal by ants," she said. After reading scientist Edward Wilson's book about his experiments with ants – especially the tale of how any ant that smells dead (even if it’s still alive) gets swiftly carried away from the colony - Kohler fell in love with the word.

So how does it feel on the other side of the committee table, tackling these conundrums of lexicography?

Vexing, according to Hall.

"I often get knocked out in some early round because I look at my correct spelling of 'paraffin' and decide it has one F too many," he said.

Hall won the bee in 2006. "Nobody was more surprised than me that night!"