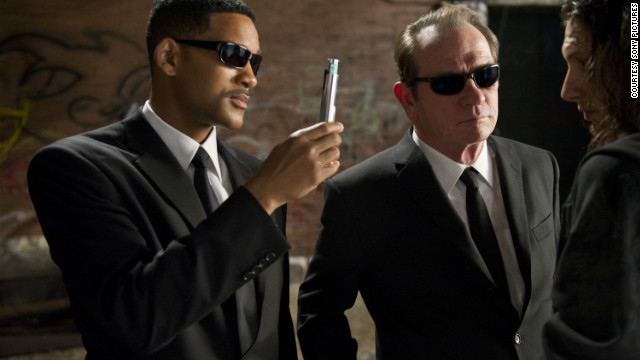 The legacy of 'men' in black

They are super-secret agents who sacrifice their identities and dedicate themselves to safeguarding humanity from extraterrestrial activity, all while operating undetected in the background of a society they are sworn to protect.

Starring Will Smith, Tommy Lee Jones and Josh Brolin, “Men In Black 3” is the new installment of the science-fiction film franchise in which “MIB” agents routinely save the planet from alien threats. In the latest entry, which is heavy on time travel, agents J (Smith) and K (Jones, and Brolin as the younger incarnation of the character) rely on shiny weapons to get the job done. And to keep the average citizen from freaking out about aliens, they occasionally have to erase memories using their handy gadget, the neuralyzer.

But don’t confuse the heroes of the “Men In Black” movies with the nefarious men in black suits that occupy a far larger space in the consciousness of people who believe in aliens and UFOs.

The source material for the "Men in Black" movies was Lowell Cunningham’s early '90s comic book. The comic portrays MIB as agents who track paranormal happenings and murder witnesses to contain a situation - obviously the funny good guys of the movies are a departure from the original.

The comic's treatment hews closer to other MIB theories found in popular culture (and we’re not talking about Johnny Cash or Jacob’s brother from “Lost”). END_OF_DOCUMENT_TOKEN_TO_BE_REPLACED