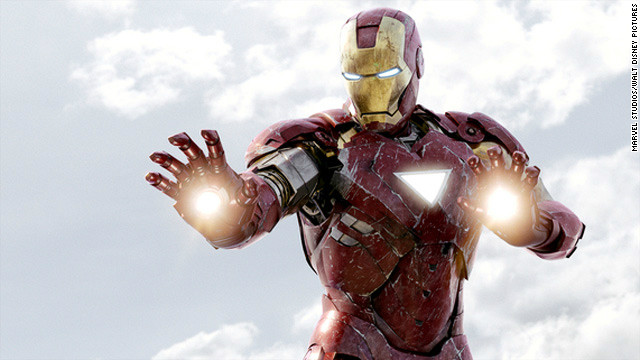 As the credits roll, some movies speak geek

[SPOILER WARNING: This post talks about the end of "The Avengers" as well as a few other well-known movies of years past. Read at your own peril.]

When the end credits start to roll after big budget summer movies and most audience members get up to leave, sit a while and you'll notice that a select group of moviegoers stay glued to their seats.

Now, it may be that these people just enjoyed the movie so much that they want to see the names of everyone responsible. But most of the time – as with "The Avengers," which has now grossed enough worldwide to be the fourth-biggest movie of all time – it's because there's still a little bit of movie left.

More and more, those post-credit scenes are aimed directly at the geeks in the audience.

For example,  the villain who was pulling the strings the entire time in "The Avengers," is revealed halfway through the credits, but he would only be known to the hardcore Marvel Comics fans watching. iReporter Cherry Davis told CNN Geek Out that she "literally screamed" when she saw that scene.

"I felt like the credits bonus was the ideal place for a shout-out and thank you to fans, a tease for the upcoming films and that it serves to invite people who aren’t as familiar to educate themselves about the grander universe of Marvel," said Screenrant.com writer Jennings Roth Cornet (who admits that such a scene, aimed directly at Marvel geeks, could potentially be "off-putting" to the mainstream audience).

It was only the latest in a tradition of post-credit scenes - often called "Easter eggs" or "stingers." Since 2008's "Iron Man," Marvel movies hinted at what was to come as Samuel L. Jackson's character Nick Fury assembled a dream-team of superheroes.

"For Marvel geeks, seeing the hammer lying in a crater [at the end of 'Iron Man 2'], seeing Nick Fury reveal a glowing cube in a briefcase [at the end of 'Thor'] – these were all pretty exciting signs of a larger superhero universe," said iReport Awards nominee and comic book historian Alan Kistler.

Collider.com managing editor Matt Goldberg said, "Geeks knew 'Thor' was coming in 2011, so when they saw [the hammer] Mjolnir after the credits in 'Iron Man 2,' they got giddy. [These scenes are] a coming attraction aimed directly at people who already know what's coming."

"They're like a door prize for sitting through the movie," said iReporter and movie critic Richard Crouse. "Stay to the end and you get rewarded."

"Avengers" director Joss Whedon even poked fun at these post-credit scenes by adding a second one to the movie, which was just a shot of the superhero team eating.

And yet, sometimes that reward is bittersweet. "I’m personally a bit sensitive to marketing tools and perceived manipulations, so as much as I respect the strategy there is something about it that is a bit inherently off-putting to me," said Cornet. "I don’t like to see passion manipulated. Nor do I like to see the sometimes negative results of polarizing responses to things."

Even so, she said, "It is interactive and a geek/gaming culture needs that. It invites fans into a speculation that becomes almost like unofficial [fanfiction]. They’ve invited us to become a more intimate part of the franchise and that demonstrates a tremendous understanding of the needs of contemporary audiences."

Marvel Studios' series of "Avengers" movies hardly invented the post-credits scene, or even the surprise shot at the end of a movie (that goes back to "Carrie" – as noted by iReporter Zennie Abraham, or even further to movies like "Invasion of the Body Snatchers").

"X2: X-Men United" ended with a shot of a brightly lit phoenix in a lake, something of a head-scratcher for casual viewers, but a secret code for longtime "X-Men" comic book readers that the character, Phoenix was coming. This has been cited as the beginning of the current spate of superhero movie "stingers."

"I think they’ve been crucial to branding Marvel as a dynamic cinematic franchise with long-term goals and plans that will, indeed, eventually pay off," said Cornet.

At this point, fans are trained to expect it.

Not all of them are winners, though: The post-credits scene for "X-Men: The Last Stand," which suggested that Professor Xavier may not be dead, has yet to pay off.

"As long as there hasn't been a crucial piece of information provided in this scene, then fans will be OK," said Goldberg. "However, there will be backlash if the scene is unearned and sets up a major plot point for the sequel."

Dibinga pointed to the post-credits scene of "Captain America: The First Avenger," which turned out to be a teaser trailer for "The Avengers."

"At that point I was annoyed because I wished they would sometimes let the movies stand by themselves."

Then, there was Tony Stark's appearance at the end of 2008's "Incredible Hulk."

"It wasn't as strong a set-up for things yet to come," said Kistler who admits that while fun, the scene "didn't really go anywhere."

Kistler also noted that the "Iron Man 2" scene didn't ultimately accomplish much, saying it "was nothing more than telling us 'Thor is coming out soon.' So those seemed like wasted opportunities."