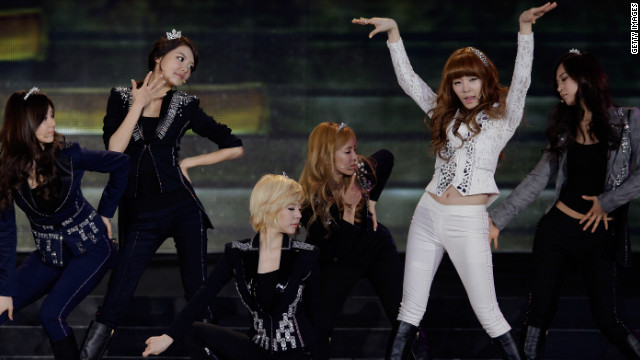 K-pop: You can thank Google for your new obsession

Google announced last week that it would host a free concert May 21 at its Mountain View headquarters featuring a host of Korean pop music acts such as SNSD (also known as Girls' Generation), DBSK (also known as TVXQ), Super Junior, The Wonder Girls, KARA and more.

You may not know these names, but to a devoted K-pop fan, seeing even one of those bands is a seriously squeeworthy event.

Fans like me would easily pay a great deal to see a show like this. And in many ways, it is fan devotion that is responsible for such an event appearing in the States. A representative for the concert said in a statement, "I think that previous performances by Korean artists were targeted towards Korean-Americans or the Koreans living abroad, but this time its appeal will spread to all fans of pop music in the US."

There's only one message to get out of this: Google believes K-pop has universal appeal. It's been on the rise for a while, though. Last year, a similar variety show sold out Madison Square Garden and sent fans across America into a total frenzy. Girls' Generation was also featured on David Letterman in early February and performed the English-language version of their hit song "The Boys." My friends and I gathered around the television, waiting to see how it would all turn out. And we were overjroyed when the performance met with resounding applause.

My own discovery of K-pop was a slow one. I've been a J-pop fan for more than a decade, but K-pop was a foreign world that I had no idea how to get into. That is, until I saw my first TVXQ video.

If there's anything I fell in love with about K-pop, it's the appeal of the total package. From the razor-sharp choreography to the catchy songs, K-pop screams of polished perfection. It mesmerized me from the word go, and it seems to have worked the same magic on millions of other fans.

K-pop has been around since the '60s, but the debut and rising popularity of South Korean group Seo Taiji & Boys (Korean website) defined K-pop in the '90s. A few years later, Korean entrepreneur Lee Soo Man founded S.M. Entertainment, which would grow to become South Korea's biggest talent agency and turn out some of the most popular groups today.

By 2000, countries such as Indonesia, Japan, Thailand, China and more had caught the K-pop bug. Recognizing these different groups of fans, bands such as SNSD and TVXQ chose to put out Japanese-language albums in addition to their Korean albums. The two bands also have alternate names: SNSD is known as Girls' Generation outside Korea, and DBSK is called Tohoshinki in Japan.

And there's a noticeable amount of English in K-pop music. According to Bianca Gomez, who runs a Korean news and discussion blog called Angry K-Pop Fan, English is highly prioritized in Korea as a way to appeal to a foreign audience.

"Though K-pop has been using English in their songs even before its boom abroad (a possible suggestion that English is a part of Korean society as a whole, and not just an element that came about with the rise of K-pop), now that its international appeal is more evident than ever, it won’t come as a surprise to learn that English is being used as a subtle promotional technique (to a greater extent) in today’s hits," Gomez said.

Much like their Japanese counterparts, Korean stars spend a great deal of energy on variety show appearances, developing their personalities so fans can get to know them better. "It’s not only about the music but also about the celebrities themselves, and it is exactly this sense of attachment that the industry thrives off," Gomez said.

So K-pop is catchy, fun and entertaining. But plenty of music is, and yet it doesn't captivate the globe in quite the same way. There's something unique about K-pop's colorful outfits and carefree approach that tugs at fans. It's something I can't get out of my mind.

"There’s a reason they’re so popular, and that’s because they’re so personable, " said Patricia Hernandez, editor-in-chief of Nightmare Mode and high-level K-pop addict. "Typically, you might look at a group of girls that big and think, oh, the company is trying to sell you a harem fantasy or something, but it’s not like that at all."

"Sure, they sexualize their acts," she said, "but it’s very different from how an American might sexualize an act. It’s not as overt, and ultimately, yes, the K-Pop stars are all very attractive. That definitely helped; K-pop is less a music genre than it is image and marketing. I can’t say I mind ogling all the folk. Who can complain about that?"

As a fan, I agree there is something at the heart of K-pop's take on sexuality that differs greatly from the way we approach it in the United States. Gomez said fans are attracted to the presentation.

"Many have gone as far as saying that its images are way more ‘innocent’ than the highly sexualized and mature content we see in American pop media. Many turn to SNSD when Christina Aguilera became ‘too sexy,’ and many listen to BEAST and Super Junior to neutralize the drugs and sex of Rihanna and Eminem," Gomez said.

"This becomes especially evident when criticism erupts about (Korean) idols like HyunA for her ‘booty-shaking,’ those of which make clear that for many, such impressions are blurring the lines between what is supposedly the appeal of K-pop and what needs to stay in American pop.

"K-pop is popular because it is the fans who recognized the entertainment and genius that exists within the realm, and they’re the ones who pushed (and continue to push) for its prominence on the global stage," she said. "This encouraged involvement of fans is another element that many international consumers are attracted to."

K-pop acts benefit from the history of American pop acts, Hernandez said. "Which is to say, they have a good backdrop of what good pop music sounds like, and so they’re building off that and they’ve found ways of going beyond it."

"To me, what they provide is better than anything our boy/girl bands ever produced in their hey-day. There’s something about how K-pop captures happiness," she said.