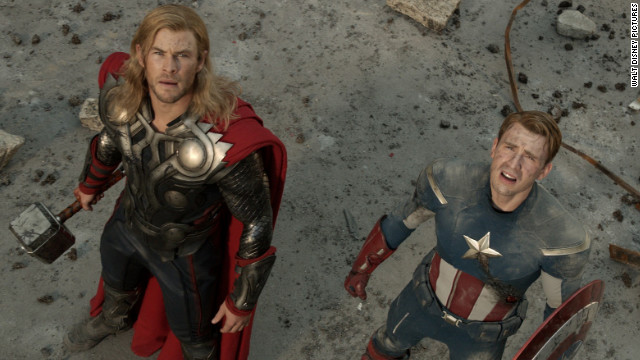 So yeah, I loved “The Avengers.”

Let’s simmer on that word for a few: love. Love for a movie is a pretty significant emotion, and yet I stand by it. While not perfect (the gripes are ridiculously minor), the film was a pure joy. It delivered on the promise of a Marvel-ous adventure with Captain America, Thor, Iron Man and (finally) an awesome, Incredible Hulk.

But this isn’t a movie review.

Instead, it’s more of an “I told you so,” to Hollywood power brokers locked into the philosophy that audiences crave dark heroes and sober plot lines, and that the geeks who grew up loving the source material could not be trusted to make a blockbuster.

Nerd favorite writer and producer Joss Whedon assembled “The Avengers,” who stormed the box office last Friday. There was a sense by Sunday that everything had changed for superhero movies.

On Sunday night, Walt Disney Co., which owns the Marvel Comics characters, announced the new flick had debuted to $200.3 million (later updated to $207.4 million) – the largest all-time opening weekend for a movie (and yes, a sequel is coming). But for fanboys and comic geeks like me who had been tracking the super-group superhero movie, this was no big surprise.

OK, so it was a little bit of a surprise - a pleasant one - but we geeks had been waiting for this.

In fact, we’ve been debating, discussing and having fantasy casting sessions for the movie for years. Geeks have been so patient, waiting for a movie that could pit Earth's (and Asgard's) mightiest heroes against themselves before teaming them up to battle a common, villainous threat.

This goes for all superhero groups and coincidental team-ups. For comic book nerds, these ultimate match-ups are fueled by years of imagining what would happen if comic book universes faced off (Superman vs. Thor, Captain America vs. Batman, etc).

"The Avengers" is supergroup movie on an entirely new scale. Outside of animated features, the only time we've really seen team-ups has been in disappointing franchise films like "The Fantastic Four." Additionally, Marvel has taken its time by slowly building their universe through stinger scenes and Easter eggs in their other movies, beginning with 2008s "Iron Man."

Moreover,  there is this desire within the nerd community to share their love of these fantastic characters and the infinite possibilities of a team like the Avengers. Whedon's the one who has been able to help us communicate to all our friends and family, "See? This is what I have been talking about!"

I spent my comic book collecting youth wishing that a fellow nerd would create a movie for us. Be true to the material, we all thought, and others would fall in love as well. And now that it's here, it is as if the clouds parted and our new, four-color mythological gods of the funny books had sprung to life on the movie screen just as we’d always hoped.

This isn't to say that comic books haven't spawned some truly visionary films.

As much as I’ve enjoyed Christopher Nolan's take on the Caped Crusader in “Batman Begins” and “The Dark Knight” – and actively look forward to the conclusion of his series in “The Dark Knight Rises” – I never walked out of the new Batman movies feeling the elation I felt after "The Avengers."

“Dark Knight” was great and masterfully executed, and I remember chatting on the way out of the theater with others also impressed with the serious film, but my fanboy glee was absent.

Exiting “The Avengers” was another matter altogether.

It is a popcorn-movie, not a film, but people were excited, inspired, giddy, animated as they walked out of the theater. There even seemed to be a few newly-converted geeks. I have caught glimpses of this before in varying degrees – during moments of “Superman Returns,” “Spider-Man 2,” “X-Men 2,” “Iron Man” and the other Marvel precursors to “Avengers” – but never like this.

The joy I felt after watching "The Avengers" was enlightening: I think I’ve had my fill of “gritty realism” when it comes to comic book heroes. Nolan has done a great job at showing that a man can become a symbol in an ultra-realistic world, and he did it with an epic scope and without CGI effects, but I would still like to believe a man can fly.

Likewise, I think audiences would like to believe a demi-god alien can crash to Earth, a super soldier clad in stars-and-stripes can survive being frozen for 70 years and that a Hulk can smash. A little magic and a fantastical adventure is as good for the geek as it is for the muggle; perhaps it is no coincidence that the last biggest opening weekend record holder was another magical adventure: “Harry Potter and the Deathly Hallows – Part 2.”

Hollywood should listen to the geeks more often - if only to ensure the superhero genre continues to go up, up and away in quality and box office receipts.