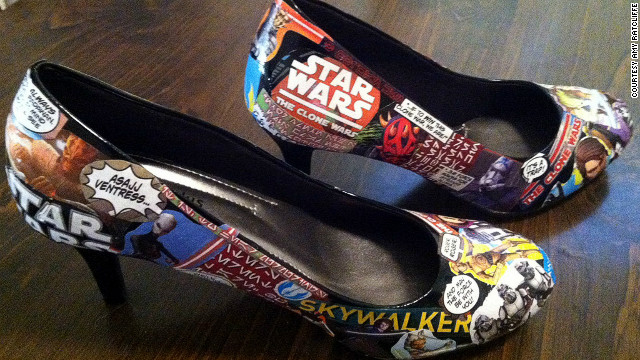 Ratcliffe spoke to CNN Geek Out about how she pulled it off:

CNN Geek Out: What inspired this idea?

Ratcliffe: I've seen a few pairs of decoupage shoes around the internet and longed for them – especially the Star Wars styles. Once I realized how easy the technique was, I felt silly. There was no reason not to make my own nerdy shoes. It’s time-consuming, but anyone can do it. All it took was a pair of simple (and cheap) black heels from Payless, some basic craft supplies and a pile of Star Wars: The Clone Wars magazines to destroy. Honestly, the hardest part was bringing myself to cut up the magazines.

CNN Geek Out: Why "The Clone Wars" for your shoes, in particular?

Ratcliffe: I knew my shoes would be "Star Wars" themed; that wasn't even a question. It wasn't until I spotted some "Clone Wars" stickers at a friend's baby shower, though, that I knew I wanted to focus on the animated series. Watching "The Clone Wars" is actually what pulled me back into the Star Wars universe with force (ha!), and it was only fitting to devote my shoes to some of my favorite characters. None of the stickers I bought actually ended up working on the shoes, but the images I found in the magazines were perfectly suited for the task.

CNN Geek Out: How did the shoe crafting party come together?

Ratcliffe: I'm lucky to have some very crafty geek girlfriends. While we were together making decoupage nerdy bangle bracelets, we discussed how much we wanted to try customizing shoes. It became one of those "eventually" projects. Then the photo of the R2-D2 Toms started making the rounds around the internet. The messages started flying back and forth, and we set a date to try our hands at shoe crafting.

Around 13 ladies showed up at my house with paint, glitter and enthusiasm. It's all you really need for crafting, maybe for life. Hours of crafting yielded four different styles of R2-D2 shoes, blue TARDIS heels, a sexy pair of Batgirl heels, "Star Wars" decoupage heels, painted "Adventure Time" sneakers, glittery and deadly Dark Phoenix heels, House Targaryen painted canvas shoes, and more. Only one lady actually completed the project that got us all together in the first place (I'm still too intimidated to face my Toms).

CNN Geek Out: What are the essentials needed if someone else wanted to do this?

Ratcliffe: If you can't stand glitter in your house, don't host. No, really. I'm still finding glitter in weird places, like my contact lens case, over two weeks later.

Other than that, just be helpful. I made a list of tutorials for the different styles of shoes and tried to create a comprehensive list of necessary supplies. I had a few communal items for everyone like some cheap paintbrushes, sealant and tape, but for the most part, everyone brought the stuff they needed. I like that method better than taking a $5 donation and trying to buy supplies that will make everyone happy.

I'd also say don't be put off throwing a party if you don't have a lot of space. My place is not big, but we all fit comfortably, and I think the coziness lent to the helpful spirit. The more the merrier, and especially encourage friends who don't think they're crafty to come. Being surrounded by people focusing on the same task will make you less scared to add that first bit of paint.

CNN Geek Out: Have you worn the shoes yet? Any plans for more?

Ratcliffe: I haven't yet! Though they are sealed and I feel like they are protected, I'm saving them for special occasions like convention parties or weddings. [Note: She later told us she would wear them for May the 4th.] I did make a pair of glittery blue TARDIS flats that I wore out and about for the first time yesterday. My friends noticed, but I think everyone else was just dazzled by the glare from the glitter.

One of these days I will start and finish my R2-D2 Toms. I’d also like to paint the Rebel Alliance symbol on some gold flats, and I'm working on decoupage Love and Capes heels.

Would you try something like this? Have you? Let us know in the comments, and May the 4th be with you!