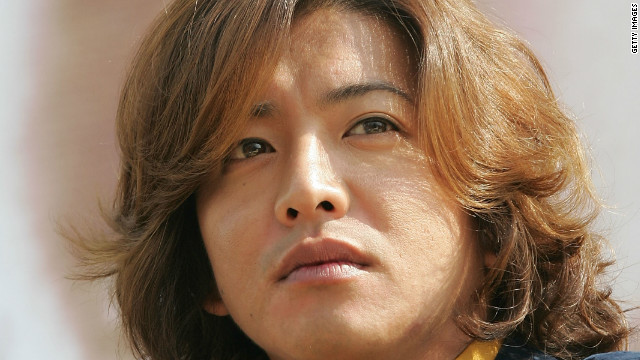 The mystique of the Japanese male idol

After a 22-year streak of sending pop fans into a frenzy, Japanese "boy" band SMAP debuted their newest single this past week, "Upside-down Sky," which rocketed to the top of the charts immediately. It's not the band's first time there, either - it's actually its 24th time hitting the No. 1 slot, and its second time this year.

Maybe SMAP sounds more to you like the sound of a bug hitting a windshield than the name of a band, but these guys have nailed the boy band formula in a way that few American bands ever have. With 19 studio albums and 45 singles, they are just as successful as a New Kids on the Block or Backstreet Boys, but they have something more: longevity.

"They're ubiquitous," says Eric Allerton, founder of the Japanese culture hub Gaijin Kanpai network. "They work like crazy hosting variety shows, charity events, and they star in dramas and commercials. They're famous because they were one of the first idol groups ever and they've grown up with their fans."

"And now, all the housewives drool over them because they're on TV 23.5 hours a day."

But it's not just SMAP. Its members are a golden example Japan's "male idol" - beautiful people who wear their hair longer, prefer fitted clothing and are even sometimes mistaken for women. SMAP member Takuya Kimura has often worn his hair in a style that is usually considered ladylike, and the fans love it.

While they might not resemble America's heartthrobs, they've got a following in the United States, too. Their fame is spread through magazines at Japanese grocery stores, videos on YouTube and online fan clubs and communities.

"The key to my fangirl heart is both an idol's ability to make me laugh and to laugh at himself, in addition to a quirky persona," said Yaiko Shimizu, who runs the culture enthusiast website Asian Pop Shock. "My all-time favorite Johnny's Entertainment group is Tokio because of the zany, warm, hilarious personalities the members present to the public. You never feel like they take themselves too seriously."

If you're a fan or even a casual observer of Japanese pop culture, you've probably noticed an appreciation for the pretty, somewhat feminine look, including in its boy bands. It's confusing to some Americans, whose boy bands and young stars typically project masculinity or at least boyish charm. But just like Japan's female pop idols, Japanese men are revered for their good looks.

"I think, for some Japanese fans who are attracted to the 'cuteness' of male idols, a lot of the appeal has to do with the implied openness and sensitivity that's presented as being a part of that kind of persona," Shimizu said. "While a cute idol can still be masculine - think Arashi's Sho Sakurai - he's not someone who's likely to be perceived as threatening. It makes these idols safe, comfortable love objects, particularly since they're generally considered out of reach."

Some idols are above reproach in Japanese society - always perfect, always smiling and beckoning. They're the trendsetters, appreciated for their perfection and ability to entertain.

"They're one of the few Japanese celebrity bands that can really get away with anything, because they set the mark for so many bands after them," Allerton said in regards to SMAP's popularity. "They're pretty much the Jackson 5, but they're all Michael."

But not every idol is untouchable forever. Unless they reach the heights of stardom to become treasured commodities, like SMAP, they're disposable - there will always be another product waiting in the wings to take over the spotlight. While their faces are beloved, they can also be replaced.

Ex-KAT-TUN member Akanishi Jin recently enraged a portion of his fanbase by marrying actress/model Kuroki Meisa after rumors she was pregnant. Despite Akanishi's popularity, his fans weren't afraid to stray when he didn't behave as they expected.

But there is also an awareness that idols are playing a role: the embodiment of a cute, marketable product. Japanese male idols take this concept of cuteness to their own unique level. Since audiences are responsive (concerts from Japan's megabands attract an estimated 48 million fans, according to the Guinness Book of World Records), Japan has recognized the profitability of pop idols.

This reverence for cuteness is foreign to most Americans, but deeply ingrained in the Japanese psyche. For instance, a girl might not be a good singer, but if she looks cute and sells records, her act will likely become popular anyway. SMAP have often been cited for publicly admitting they are not talented. However, they are professional about what they do, and Japan values their dedication. As Japan Times writer Phillip Brasor puts it, "Idols don't have to be capable, because they represent the hopes and dreams of people who will never be idols."

Idols publish photo albums, join bands, star in dramas and variety shows, and get as much exposure as they can while in their prime. SMAP was not initially successful, but once its members were marketed as personalities on variety shows, they soared to stardom. Since then, they have hosted a variety of celebrity guests on their own variety show "SMAPxSMAP," starred in a reality TV show about their work and even promoted their own soft drink.

Japanese talent agencies continue to train and shape the commodities of pop idols. The best-known producer of boy bands and male idol celebrities is talent agency Johnny and Associates, which formed in 1962. Its stable of idol  bands includes more than 40 successful acts, including SMAP, KAT-TUN, Arashi, NEWS and KinKi Kids.

"The Asian idol system actually has a very 'old Hollywood' vibe - think along the lines of the young 1930s stars groomed by MGM," Shimizu says. "Celebrities had tightly controlled private lives (unless romances suited PR purposes) that generally left them to at least appear available to female fans, and scandals were swiftly punished. If that old school approach doesn't sound like Johnny and Associates, I don't know what does."

In her book "The Worlds of Japanese Popular Culture: Gender, Shifting Boundaries and Global Cultures," author Dolores Martinez examines the heart of idol culture and writes that television and Japan's postwar press were the major agents for the cultural production of popular idols for mass consumption.

"In the corpus of dramas that are continuously being diffused through the mass media of modern Japanese society, these idols - somewhat like gods in polytheistic mythologies - while transcending ordinary existence, also grow out of it and sustain that existence. While production of these idols by the mass media mirrors a distorted version of social reality, it also plays a key role in creating new social realities," she writes.

These pretty men serve an essential purpose in Japanese culture: They fulfill dreams. But they also push fans, Japanese and American alike, to aspire to the dedication they show to their media personae.

"Idols are beautiful, unattainable people we get to 'know' through an almost constant barrage of public appearances, " Shimizu said. "Since they enter the industry at such a young age, we get to watch them grow into adults. And consequently, we end up invested in their careers."