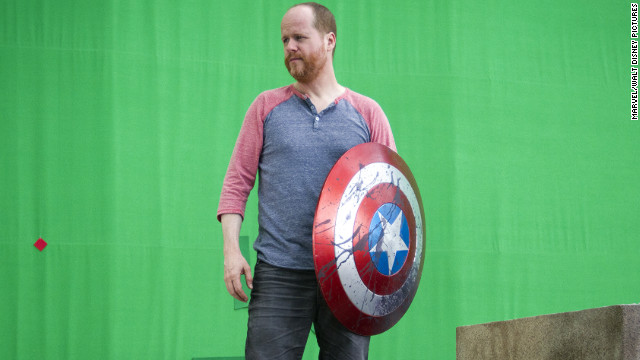 With Whedon on the cusp of such a big moment in his career, it bears pondering just what it is that inspires such devotion among fans, who will surely line up alongside the masses to see Iron Man and the rest crack wise and fight off Loki's army.

“He’s a great writer," said actor Clark Gregg, who appears in "The Avengers," as well as Whedon's upcoming film adaptation of "Much Ado About Nothing" (which Gregg teased involved characters in the present day – even using smartphones – spouting Shakespearean dialogue).

"He's funny and writes great story and he is respectful of the sci-fi/comic universe. At the same time, he’s willing to push the boundaries of it. With a lot of the great storytellers, there’s a bit of a trickster element – tricks and surprises for the audience, done so to give them the ultimate experience – that just seems like Joss in a nutshell for me."

"He picks classic stories. He’s so versed in Shakespeare and Greek tragedies. He picks timeless character and story outlines for the modern audience. With a little of his own Joss ‘Grr, arghh’ flair."

Georges Jeanty illustrates that Whedon flair as a penciler for the "Buffy the Vampire Slayer" comics.

"It’s very much the style of writing he has. When you read something he’s written, it comes across. Even on the page, you get those little nuances you would see on the TV show and you would expect from Joss even at the writing stage."

Whedon's "Joss-speak," that one-of-a-kind flair for dialogue, has even inspired a book, "Slayer Slang" - for example, the addition of a "y" at the end of nouns to make a new adjective (like "angsty"). This quirky dialogue has permeated contemporary expression.

“Once something becomes part of pop culture you lose the origin," said Jeanty. "You tell somebody ‘Beam me up’ - they may never have seen ‘Star Trek’ but they know exactly what you mean."

Beyond "Slayer Slang," the books written about Whedon's style of storytelling are legion (one was even released on Tuesday), and have been good fodder for academia. There is "Slayage," a journal on "Whedon studies," as well as the Whedon Studies Association, a 501 (c)(3) that holds a biannual conference.

"(There are) layers of meaning. Deep, deep layers of meaning bound up in clever, symbolically complex language," said Tanya Cochran, associate professor of English at Union College and author of multiple works on Whedon, such as "'And That Makes Us Mighty': Joss Whedon, His Fans, and the Rhetoric of Activism."

"I always hear fans confessing how much they value being treated as intelligent," she said.

"Even with much academic research that explores the complex nature of fandom and individual fan experiences, fans continue to be stereotyped in mostly disparaging and misinformed ways. Whedon doesn’t do that as he typically aligns himself with his fans rather than distancing himself," she said.

And fans, she said, accept him as one of their own.

"It’s difficult for them not to. In the preface to early screenings of the motion picture 'Serenity,' for example, Whedon commended fans for not giving up on 'Firefly,' even after it was canceled by Fox," she said.

The most enduring quote from that preface: "We have done the impossible, and that makes us mighty."

"Not you - we," Cochran said. "That sense of camaraderie is powerful."

David Lavery, professor of English at Middle Tennessee State University and author of "Joss Whedon, a Creative Portrait," put it this way: "His fans root for him as believers in what Whedon once called the 'religion in narrative.' They root for him the way a sports fan cheers for his or her team, jumping off the sofa to cheer his imaginative accomplishments. We want his TV series, and comics, and movies to succeed so they can make his imagination their imagination."

Rhonda Wilcox was hooked on Whedon's work from the very beginning of "Buffy."

"I loved the moment in the pilot when, after being warned away from the nerds by the popular girl who was befriending her, Buffy still went to hang out with the nerds: my people," she said. "In the early years, the Alyson Hannigan character of Willow was my emotional way into the show - and I've heard many others say that."

Wilcox, a professor of English at Gordon College, wrote "Why Buffy Matters: The Art of Buffy the Vampire Slayer" and "Fighting the Forces: What’s at Stake for Buffy The Vampire Slayer," co-authored with Lavery.

"Joss demonstrates his respect and appreciation for his audience as peers in the creative process, opening up directly to them," said Simon Fleischmann of Whedonverse.net. "Unlike other creatives who might keep their fans at arm's reach, or communicate through PR-mediated gatekeepers, Joss feels comfortable enough to speak with fandom unfiltered."

"He gives his audience not what they want, but 'what they need.' He doesn't rely on cliches and established tropes - he subverts them. He doesn't introduce characters that are cute and fuzzy and lovable because marketing said they'd make good action figures. Instead, he forces his audience to confront painful situations, such as the loss of major characters, or the realization that for some people there are no happy endings."

"We fans spend countless hours discussing many aspects of Joss' work but I think we spend the lion's share of our time speaking to the impact that it has had on our personal lives," said track director Wayne Hutchinson. "There is a strong sense of community and passion when discussing his work and that creates a strong bond."

Even though his latest work just happens to be one of the most expensive, anticipated movies of recent years, fans and colleagues expect that the same Whedon spirit will shine through.

"This is not new territory for him, it’s just bigger," noted actor Fran Kranz, of "Dollhouse" and "The Cabin in the Woods."

"Joss is finally having the attention he deserves and hopefully it just grows from here."

Are you seeing "Avengers" at a midnight screening? iReport your experience!