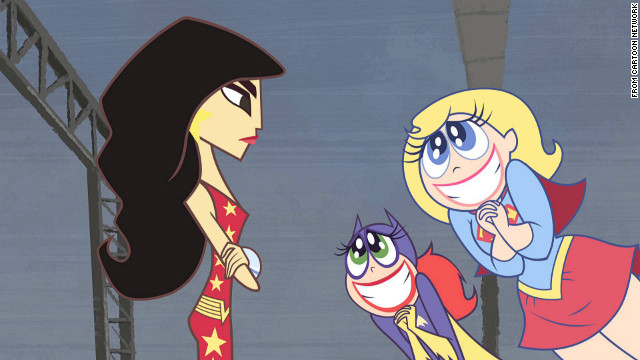 “He told me about it and I said, ‘I want to do one!’ ” said Faust, who developed “My Little Pony: Friendship is Magic” and served as a director/writer/story artist on “Powerpuff Girls.” “We put together just a quick, 15-minute verbal pitch and three drawings, and it went from there. I got to pick the characters I wanted to use and I got to interpret them in my own way.”

Faust’s take on the young superheroines is pure fun, and she drew inspiration from artist Brianne Drouhard’s bubbly, youthful fan art of Batgirl. (Drouhard is contributing “Amethyst: Princess of Gemworld” shorts to DC Nation.) Those characteristics come through in Faust’s interpretation of Batgirl, who practically bursts with enthusiasm. She has to wait for her father, Commissioner Gordon, to fall asleep so she can sneak out and fight Poison Ivy with her friends. In future episodes, the girls will take on Solomon Grundy and classic Wonder Woman villain the Cheetah.

“I took the idea that … she became Batgirl because she loves Batman. She’s a fan,” Faust said. “Why else, if you weren’t related to a person, would you take on their mantle? I just made her this geeky, spazzy fangirl who is just having the time of her life.”

As Wonder Woman’s sister, Wonder Girl has a serious, regal air. But because she was raised on an island of Amazons away from the world of men, “She doesn’t quite always get what’s going on.” And then there’s Supergirl, a brash kid who just wants a little recognition.

“Unless you’re a comics fan, you really only know of Supergirl as the girl version of Superman. She’s got the same powers. She has the same backstory. She can do everything he can do, and nobody pays attention to her,” Faust said. “She’s kind of chopped liver. If you were 16, that would make you really angry.”

She even gave the characters their own distinct physicality: Supergirl is the muscle ("I thought it was important that when she hits you, it looks like it's gonna hurt.") Batgirl is the pipsqueak, and Wonder Girl is the tall beanpole.

While viewers may see elements of “Powerpuff Girls” in “Super Best Friends Forever,” Faust said the new shorts are really more about being a teenager than battling bad guys.

“The focus of the story is a little more of a superhero spin on a teenage situation — having to wait for your dad to fall asleep so you can sneak out,” Faust said. “The story is more about sneaking out than fighting Poison Ivy.”