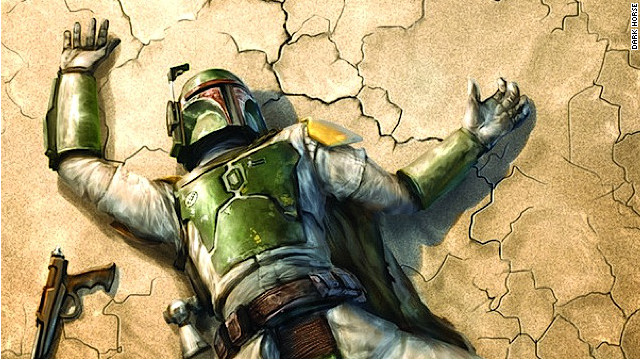 CNN Geek Out: Are you a Star Wars fan? If so how long you been one?

Taylor: There are people who aren’t Star Wars fans? Bring them to me! I will teach them the error of their ways. I’ve been a Star Wars fan for as long as everyone else my age has been, from about 30 seconds into the opening credits of “A New Hope.”

CNN Geek Out: What, in your mind, draws people to Boba Fett?

Taylor: The themes of the original Star Wars movies are deliberately very simple. Jedi and Sith, peace and war, light and dark. Then, this guy shows up in the movies who isn’t black or white … he’s green. His bad-ass helmet and suit of armor are covered in the scars of battle, and he’s wearing a jetpack! How can people not be drawn to that?

Boba Fett stays this mysterious, menacing bounty hunter. This makes him instantly intriguing. I think everyone wanted to know more about this one character who isn’t good or evil, he’s just on the darker side of ambiguous.

CNN Geek Out: What other Star Wars favorites, if any, will put in an appearance in this book and series?

Taylor: I can tell you that Darth Vader does make an appearance amidst a whole lot of fire and explosions. Artist Chris Scalf first came to comics prominence illustrating Vader, and it’s great to see him illustrating the Sith Lord again. There’s another smaller character, too, but I don’t want to spoil that one for the readers.

CNN Geek Out: Can you tell some newer readers a little about Fett that you think is important for folks that might not know from “Empire” or “Jedi?”

Taylor: Fett is the most infamous bounty hunter in an entire galaxy far, far away. He always gets his man, and he’ll stop at nothing to do so. He is a formidable fighter, a crack shot and he is never unarmed. Also, he’s played by my friend Daniel Logan in the prequel movie and in the “Clone Wars” series. He and I are having a little friendly war over Twitter about me killing him. I explained that it wasn’t me, that it was, in fact, a team of mercenaries in a comic book but Daniel is still pointing his Twitter finger at me. I think this proves that the pen is mightier than the sword, but I’m not sure it’s mightier than his rocket launcher. We’ll just have to see.

CNN Geek Out: Fans have seen Boba Fett “die” before. What makes this time different?

Taylor: I’m gonna go with the many smoking holes all over his body.

CNN Geek Out: How much of a hand did Lucasfilm have in this story?

Taylor: While I generated the idea, they go through everything with a fine-tooth-comb. The Star Wars universe exists across games, TV series, movies, comics, novels and far more obscure things and everything is canon. Lucasfilm needs to keep all of this in mind and help to make sure I’m not accidentally tripping over continuity. You can’t have a character go and visit Alderaan the day after the planet is blown up. Well, you can, but they’d be lonely.

CNN Geek Out: For folks new to Star Wars comics, what’s the one reason they should pick this book up?

Here are some of the comics scheduled to hit the shelves on Wednesday. Your local retailer will probably have these and others, so make sure to check with them for more details.