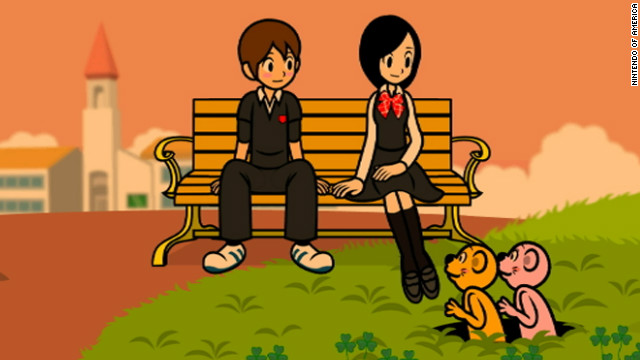 Why the U.S. might never catch on to the next big rhythm games

This week, a Japanese game company announced it is making "AKB48+Me," which features the enormously big-in-Japan all-girl pop group AKB48, and gives the player a chance to rock out right alongside them - as a member.

It's meltdown-worthy for fans of J-pop, but "idol simulation" is just the latest in the long line of games that bring together music and motion - and never made it to the United States.

It's not unusual to find plastic guitars and drums in American living rooms these days. "Rock Band" is massively popular with gamers and nongamers alike, and Nintendo of America recently made a move to localize several entries in its "Rhythm Heaven" series, which has been a beloved franchise in Japan for years. But so far, its 2 million in sales doesn't quite compare to the 75 million in Japan.

American gamers have gotten pretty good at jamming Metallica and Van Halen, but when a Japanese gamer goes into the zone while playing an arcade rhythm game, there are flying hands and speeds that seem beyond human capability.

The truth is that rhythm games were born in Japan, and evolved a bit differently in the United States.

While there were a handful of titles before it, one that set a distinctive style for what is known as a Japanese rhythm game.  "PaRappa the Rapper," a PlayStation title, brought the funk by turning players into a rapping dog who tried to win the heart of a girl with his clever rhymes. PaRappa was also the first title to reward accuracy and style, a rating system that regularly shows up in rhythm titles today. Memorizing button combinations was a part of what gamers fell in love with, and once they got to mashing them in the right order, they couldn't seem to stop.

It was official - rhythm games were infectious, and Americans began to discover something special in the distinctly Japanese flavor.

"I loved the easy to learn, impossible to master gameplay, but most of all, the quirky Japanese soundtracks," says Gary Colwell, a U.S.-based fan.

PaRappa's success made game companies take notice. Konami's next arcade rhythm game, "Beatmania," was a huge hit, which set into motion a change that is a beloved memory to many a rhythm game fan: Konami renamed its music division "Bemani" in honor of the game. Bemani went on to experiment with different approaches  and to publish groundbreaking titles such as "Pop'n Music," "Guitar Freaks," and "Drum Mania." The latter two titles have been cited as direct influences on Harmonix's popular Guitar Hero franchise.

"Taiko no Tatsujin" engaged players to beat traditional Japanese taiko drums to the beat of pop songs, while "Gitaroo Man" featured a guitar-playing protagonist years before "Rock Band" would feature the same. Japanese rhythm games had earned a reputation for two things: Having innovative design and being extremely hard.

Still, the games hadn't caught on in the West. Most games came with peripherals that were pricey to produce, so few were imported. All that changed when a new player arrived to shake up the rhythm game world:  "Dance Dance Revolution."

Konami debuted "Dance Dance Revolution" (known as "DDR" to fans) in 1998, and it brought back the same idea that "Dance Aerobics" used way back on Nintendo's Power Pad game mat. Following the pattern on the screen meant participating in a high-activity workout to current music, usually J-pop. The series has more than 100 titles in its current library, and is a standard at American arcades.

Harmonix, the major rhythm games developer in the United States, formed in 1995 and tried out a few approaches before hitting on its big money-maker: "Guitar Hero." Japanese gamers had been rocking out on treasured plastic peripherals for years, but Western gamers were just discovering how to have the experience in their homes with Western music. The game went on to earn $1 billion and rank as one of best-selling series in the United States.

Rhythm games were approached differently in the West than in their country of origin, though.

"It seems like there is a subset of American players that are into 'DDR', 'Guitar Freaks,' but it feels like a bit more of a cult thing," says Greg LoPiccolo, Harmonix's chief creative officer.

"I remember that when we first started working on the original 'Guitar Hero,' we were dissatisfied with the musicality of the Bemani games. They were technically cool and imaginative, but we didn’t care very much about the music in them – it seemed like an afterthought. So I think that is one big distinction that one might identify between the direction that American rhythm games took and their Japanese counterparts."

That difference in musical styles is why some Japanese rhythm games have been tough to import. Japan's "Taiko no Tatsujin" and "Pop'n Music" series were translated to English, but neither fared well. Games like "AKB48+Me" might never see America's shores.

"In the end, it creates more of a relationship between the audience and the developer, and produces more good music for all."