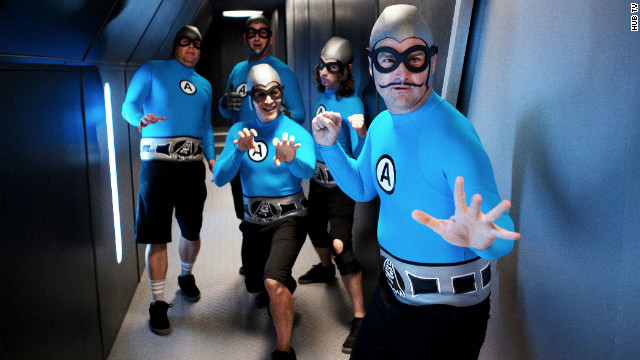 Words like “quirky” and “wacky” have been attached to alt-rock band the Aquabats, but “nerdy” is equally applicable to five guys who perform as superheroes wearing masks, rubber helmets and bright blue shirts reminiscent of the Fantastic Four.

All of which makes them naturals for a children’s television show.

After a long journey to the small screen, the Orange County band - whose members go by the names The M.C. Bat Commander (Christian Jacobs), Eagle “Bones” Falconhawk (Ian Fowles), Crash McLarson (Chad Larson), Ricky Fitness (Ricky Falomir) and Jimmy the Robot (James Briggs) - has finally brought its colorful brand of whimsy to Saturday mornings. “The Aquabats! Super Show!” landed on The Hub television network in March, and there isn’t anything quite like it in the realm of modern kids’ programming.

Billed as “the first musical, crime-fighting super-group in history,” the band travels in a custom RV and breaks into songs like “Hamburger Rain” and “The Good Life,” a paean to doughnuts. They fight villains like Man Ant, an insect-human who wears a suit and tie. In addition to animated segments involving onion spaceships, there are live-action bits including commercials for the monster repellent “Mummy Spray” and a used-car ad featuring Bear Cosby, a person in what appears to be a wolf costume.

That barely scratches the surface of the hijinks.

While “The Aquabats! Super Show!” is a unique concoction, it does pay tribute to the surreal spirit of ’70s children’s programs such as those from Sid and Marty Krofft and Adam West-era “Batman.” Comedian Rip Taylor, who played a sea genie named Sheldon on the early ’70s kids’ show “Sigmund and the Sea Monsters,” even makes a guest appearance as … a genie.

“It’s ‘The Banana Splits’; it’s ‘The Monkees’; it’s ‘Batman’ and it’s ‘Flight of the Conchords.’ ” said Donna Ebbs, senior vice president of programming for The Hub. “So much of this comes from (Jacobs’) head.”

“It stands out in my mind as stuff that was unique and different, very stylized and wrapped up in this distinct world,” said Jacobs, who also serves as executive producer of “The Aquabats! Super Show!” “Specifically the old ‘Batman’ show. It’s just so solid as far as the colors and the music and the way everything fit together. At the same time, it’s very wacky and campy. The content of the program almost flies in the face of all the effort they made to make it look great, which I totally respect.”

The Aquabats have been around since 1994, when the original band formed amid the Orange County ska and punk music scenes to play at a high school girl's birthday party.

“I think we practiced twice,” Jacobs said of that first performance. “It was very awful, but for some reason it just ignited and people were really into it."

The band has since attracted a cult following, recorded five albums and performed at the Coachella and SXSW festivals.

Jacobs and Scott Schultz, who also co-created “Yo Gabba Gabba!” had long wanted to bring the Aquabats to children’s television, but their efforts with other networks didn’t pan out. They switched gears for a while to focus on “Yo Gabba Gabba!” before a door finally opened at The Hub. Ebbs said the network responded not only to the concept but also the Aquabats’ credibility as a real band with a large local fan base, several recorded albums and serious nerd cred.

Jacobs, a self-described big kid, is an avid collector of eclectic paraphernalia such as Japanese toys, comic books, Halloween costumes and old records.

“I even have ‘Dune’ action figures. That’s pretty bad,” he said. “At some point when I’m gone, there’s going to be somebody that’s very puzzled.”

As a dad, Jacobs thinks “The Aquabats! Super Show!” works for children and parents, who will probably appreciate the references to shows from their youth. He said there’s an innocence that sets the show apart from many others.

“There’s a certain tone that children’s shows went through for a while … that was very cutting and sarcastic, and almost negative,” he said. “I resent the fact that we’re trying to turn our kids into grumpy old people before their time. The great thing about children is their innocence, and they can learn things so fast because they’re not jaded. They’re open to things.”

And adults? They can get in on it, too.