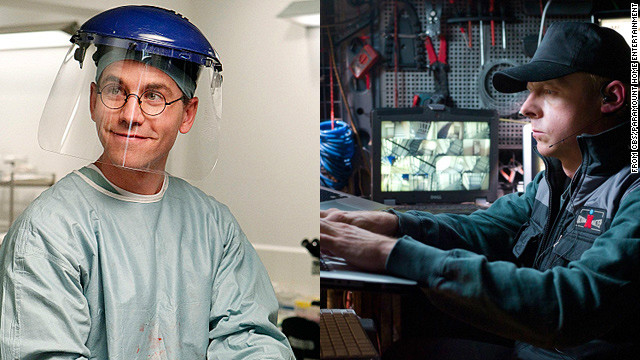 Here's a breakdown of on-screen geeks and how they're changing.

Forensics nerds have advanced enough to be able to lead series, like Dr. Brennan, the main character on Fox's "Bones." But Brian Dietzen, who plays medical assistant Jimmy Palmer on "NCIS," said his character fits right in as an awkward guy prone to putting his foot in his mouth.

Dietzen said that many in the nerd community can identify with his character.

"I think people can feel out of place a little bit within a social or workplace setting," he said. "This character takes that to the 'nth' degree, among a Michael Weatherly or a Mark Harmon – the handsome and beautiful leading men and women of TV. You've got this guy tripping over dead bodies and making inappropriate jokes and getting stares. A couple of people have said I’ve felt that [awkwardness] around people before, and I’m glad that you stand up for yourself once in a while."

Dietzen, a gamer nerd himself, said that he has been careful not to play the character as a stereotype.

“It’s easy with a character who's maybe the low man on the totem pole, who's the butt of jokes, to portray him as ignorant or stupid. [Co-star] Dave McCallum has been very instrumental in saying, 'No, no he’s not stupid. There’s no way he would be hired for this important government agency if he was an imbecile.' The importance of these questions is that he’s learning. I’ve kept that in my intention with the character. I don’t want him to come across as an idiot. That candle would burn out really fast."

Characters on series like "NCIS" should be essentially the same from week to week, Dietzen said, but Jimmy has grown a bit in the show's nine seasons.

"Over the years, he’s gotten a tad more confident and his sense of humor has gotten a bit better," Dietzen said. "I’ve been happy to be the guy who's constantly learning on the job."

He sees these characters "[representing] normal people, instead of a Superman. Ethan Hunt is something of a Superman, he’s an incredible superspy. ... As a fairly regular guy, I represent regular people, and as a nerd, I suppose the same.

“More than anything, the ordinary human being is more viable as a hero now," Pegg said. "It got to be where the ultimate hero was made of iron, like the Terminator, and you can't go any further than that. Suddenly, we start to get more fallible heroes, like John McClane [from 'Die Hard'], and that’s led to people like me and Seth Rogen being able to be in front of the movie. The regular human being is now acceptable."

There's no word on whether Benji is into geek culture, but Pegg said he got to show off his inner fanboy in one "Mission: Impossible" scene.

“Michael Kaplan, who’s our wardrobe designer, showed me a bunch of T-shirts," he said, "and there was a T-shirt with one of the original ‘Action Comics’ titles, and I said, 'I want that one!' "

Brittany Frederick, a writer for the TV fandom site CliqueClack.com, has taken note of the sci-tech nerd phenomenon and said that these characters are almost always required to be not just smart, but a true nerd. Some are mostly comic relief, like Masi Oka's character, Max, on "Hawaii Five-O," but some, like Vangsness' Penelope on "Criminal Minds," are important to plot and show development, Frederick said.

"People think that the characters who work in certain roles (tech support, scientist) are geeky, which can be true but is not always true," she said. "There's usually something quirky about the [characters] personality-wise, as if you have to be a little bit different to be a geek/nerd type."

But the characters are evolving, she said.

"I like to point to the character of Timothy McGee on 'NCIS,' as played by Sean Murray ... yes, he's a computer whiz, and he's nicknamed 'McGeek' by Tony DiNozzo. But since his inception, McGee has grown as a character," Frederick said. "He's part of the team, he goes out into the field, he busts bad guys, and he could be your next-door neighbor. His geekdom is just one part of who he is, rather than what defines him and how he's used on the show."

And other TV science and tech geeks never fit the classic nerd stereotype.

"I was a fan of Guerrero (Jackie Earle Haley) on 'Human Target,' " Frederick said. "Yes, he technically filled the role of 'tech support' on the show, but he was also equally capable of doing anything that anyone else on the show could do as well. Again, being tech-smart was far from his only role or characteristic on the show, and Jackie Earle Haley was terribly underrated. He was nerdy at moments, but he was also funny, and sometimes downright scary."

It's tough to know if geek culture will stay in the mainstream on TV, but crime dramas are at least likely to keep sci-tech geeks at the forefront, she said.

"With the rise of technology and forensic science in the public eye, they want a character who has some sort of 'expert' proficiency, because those are elements that are now big parts of crime shows," Frederick said.