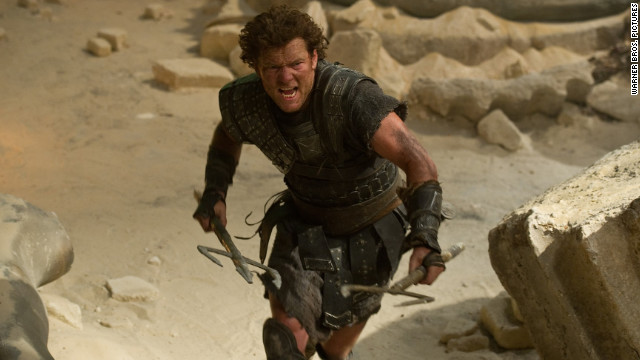 When Hollywood gets in the way of a perfectly good myth

Remember how the half-god Perseus flew on the winged horse Pegasus to save Andromeda from Hades’ Kraken, and then later battled the chimera, minotaur and titan Kronos? If your basis for Greek mythology is the 2010 “Clash of the Titans” remake and the new sequel “Wrath of the Titans,” that’s how you might remember the pursuits of Perseus. But that’s not how it happened.

Right, so technically none of it “happened,” but the Greek myths of titans, gods and men that have existed for more than three millennia are the stuff of ancient religion and part of our pop culture pantheon. Many myth geeks like me were exposed to the tales – which live at an intersection of history and storytelling – at an early age when we craved adventures about monsters, violence and valor (and were exposed to, incidentally, sex, betrayal and heinous acts).

Personally, I remember seeing the original 1981 version of “Clash of the Titans” with the Ray Harryhausen visual effects when I was about 4 years old. While not so much obsessed with Harry Hamlin as Perseus, I couldn’t get enough of the Medusa the Gorgon, the Kraken and Pegasus.

I even had a few of the action figures from Mattel’s very limited toy line that never took off. But more than the winged horse toy whose wings kept falling off, my prized post-“Clash” possession was a tattered 1957 copy of W.H.D. Rouse’s “Gods, Heroes and Men of Ancient Greece” that was kicking around my house for some reason.

Written in a spry tone I’d later associate with John Hurt in “The Storyteller,” Rouse’s book became a preferred storybook for me. Along with dinosaurs, animals and super heroes, I memorized and categorized the names of the major and minor players of myths. Although the stories themselves didn’t change as I grew older, the way they were told and interpreted did.

And then I saw the “Clash” remake in 2010. Though I tried to keep it in check, my nerd rage began to boil over.

More so than in the original, this version took pretty exceptional liberties with the Greek myths (and the original wasn’t totally faithful either). Perseus’ mom Danae is now Acrisius’ wife, not daughter? Hades killed Perseus’ adoptive father and controls the Kraken? Zeus gives Perseus his sword, and is then punked by Hades and needs human help? Perseus bails on marrying Andromeda?

What happened there? It was like the screenwriters hadn’t even read the myths and simply co-opted a hodgepodge of stories with mixed-and-matched familiar-sounding names to create an origin-story flick where the bad guy from the beginning is responsible for creating the hero that will destroy him. Yep, that’s exactly what happened.

And the liberal alteration of mythology continues in “Wrath of the Titans,” when Perseus hops back on Pegasus to cozy up to Andromeda and get an assist from Hephaestus to stop Hades and Ares (who had already killed Poseidon because gods can die) from sacrificing Zeus to the recharged Kronos. That’s in addition to the aforementioned battles with the minotaur, chimera and big-daddy titan.

Okay so let’s put aside the matter that Hades –- who was never all that evil in myth - actually aided his nephew Perseus in defeating the Gorgon by loaning him the Helm of Darkness. We’ll also forget that Perseus wore Hermes’ winged shoes instead of riding Pegasus and that the Kraken was actually Poseidon’s beast the cetus – and that Theseus defeated the minotaur and Bellerophon took out the chimera (while riding Pegasus).

I should just ignore the mythological alterations in these movies as well as “Hercules: The Legendary Journeys,” Disney’s “Hercules,” the Percy Jackson franchise and others, right? These changes should simply be chalked up to Hollywood rewrites for smoother storytelling?

Then it also shouldn’t be a big deal to make Spidey’s webshooters organic and have Greedo shoot first?

These myths are the focus not just of much academic study, but are tales that inspire imaginations and dedicated passion in some people.

To significantly alter them is to toy with the source material many of us came to love in our childhood. And lest we forget, they are also at the core of a religion – one that is still being worshipped by Hellenists. I can’t help but speculate about the ensuing outrage if a movie about Jesus was released where he decided to team up with the three Wise Men and his Uncle Moses to kick some butt in ancient Rome.

Then again, maybe the flip side is that, by watching movies like the “Clash” remake, people will be inspired to pursue that source material and read the correct versions of the stories - much like the original “Clash of the Titans” prompted me to discover Rouse’s book and begin the transition into a mythology geek.

But that may be as likely as Sisyphus getting that boulder to stay on top of the hill in Hades. It could happen (and Sisyphus did get a break when Orpheus visited the underworld), but my concern is that, after enough changes, the stories themselves might begin to change.

Myths that lasted for millennia may not withstand a century or so of cinema.