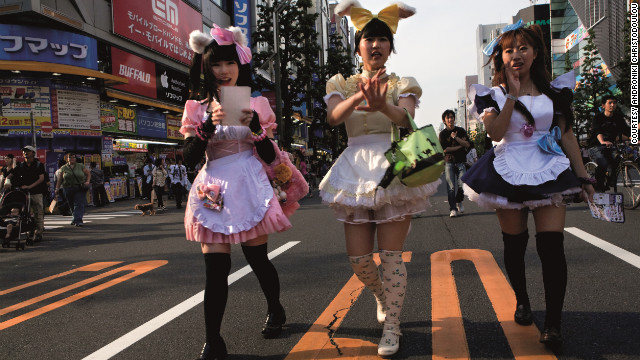 In America, a woman dressed as a maid can mean one of two things: She's here to clean your house, or she's dressed in a costume. The latter is considered sexy, while the former is anything but.

In Japan, however, the maid costume is a symbol of something entirely different: It elicits an immediate reaction. The Japanese culture has so much love for maids, in fact, that an entire culture has developed around them. Rooted in Japan's love of cuteness, it's not at all uncommon to see women dressed as maids in the streets of Akihabara, handing out fliers to promote the shops there.

And of course, otaku have a special soft spot for maids.

There have been many stories in the American news about "maid cafes" (also known as "cosplay restaurants") in Japan, which originated there in the early 2000s. At the maid cafe, the staff is exclusively made up of young women who wear maid costumes and serve their clients. The menus often feature desserts with cute decor, and maids will visit your table to decorate your food with cute designs or draw hearts in your coffee foam before they deliver it. These have become increasingly popular in recent years, and they have popped up all over the world, even in America. Tokyo is so glutted with them that even "best of" maid cafe lists have been published.

The heart of the maid cafe experience is about an intimate, safe relationship, but a subdued one. For instance, the maids refer to their clients as "masters" or "mistresses" when they welcome them to the cafe. Depending on the location, services besides basic table service are available, such the chance to play video games with the maid or take a photograph with her and have her decorate it by hand for you. The latter normally costs an additional fee, as most maid cafes forbid photography inside, but these are allowed in special cases.

There are other rules as well, such as the matter of personal or sexual questions (they are forbidden). The maids play a role when they are at work - that of an obedient, sweet, childish girl. And the customers anticipate it.

The maid cafes started as a way to cater to Japanese otaku. Maids often appear in anime and manga as a symbol of what many Japanese consider the ultimate woman: attractive, subservient, and best of all, extremely cute. An essential part of the maid formula in Japan is that it encapsulates "moe," a term which derives from a verb meaning "budding." In Japanese culture, specifically otaku culture, the word has many meanings. Typically, the word refers to a certain youthful cuteness that can be seen in much of the popular anime and manga of the time, and a specific sort of response to that cuteness - a sort of overwhelming devotion.

As maid culture got bigger, American fans of anime and manga detected the trend and adopted it for their own, as they have with many Japanese trends before and after it. Fans made their own maid costumes and wore them to cons. Many websites stock a full line of maid costumes for purchase, as well.

Emulating the styles seen in their favorite shows was a natural move for American otaku, but the reasons they wear the costumes are often different than those of Japanese fans. Foreigners are often fascinated with the ways some Japanese search for intimacy and human connection outside of traditional relationships, in videogames, 2D companionship and more. At a maid cafe in Japan, a customer can experience the warmth of having someone devote all their attention to him or her, which is a modern intimacy fantasy.

"Why do I like maids? Well, its probably because it makes me feel like I have a lot of power since I have a cute girl in a cute outfit catering to my every demand, " says Elias Varela, a U.S.-based anime fan who describes himself as having a maid complex. "Maybe it's because it's a part of the otaku culture and it reminds me of the countless moe anime girls who have worn the maid outfit. That alone makes me want to go to Akihabara and visit a maid cafe there."

But this sentiment is very different from the Japanese outlook on maids, which is a little more complex than just a girl wearing a cute outfit.

"The maid is more associated with characters in manga, anime and games than human beings," says Patrick Galbraith, author of the books The Otaku Encyclopedia and Otaku Spaces. "Consuming ‘maids’ is consuming a world where ‘maids’ exist, which is one that is utterly outside the everyday experience of Japan. It is some other place and time."

The maid image acts as an exaggerated version of how many Japanese believe a woman should be: Kind, welcoming, innocent and happy to provide for her guests at all times.

But whereas the maid often has sexual connotations in America, the Japanese version does not - or at least, on the surface.

"In the maid culture, sexuality appears nowhere and everywhere, for example: the glimpse of white bloomers beneath the frills of a maid’s shortened skirt," says Galbraith. "Such moments are charged, but at the same time defused in interpretation as merely unguarded. The explicit denial of sex clears the way for the endless production of desire, when attachments are not stable and continue to wander."

"Where hostess clubs are places to expose the self, maid cafés offer recognition without the self.  The maid allows men to be inexpert and unconditionally accepts them. Those alienated from the group and 'unpolished' by those dynamics are granted a place to just be."

It's no surprise, then, that when a visitor arrives at a maid cafe for the first time, the maid who greets them asks a question introducing the fantasy.

"Is this your first time coming home?"