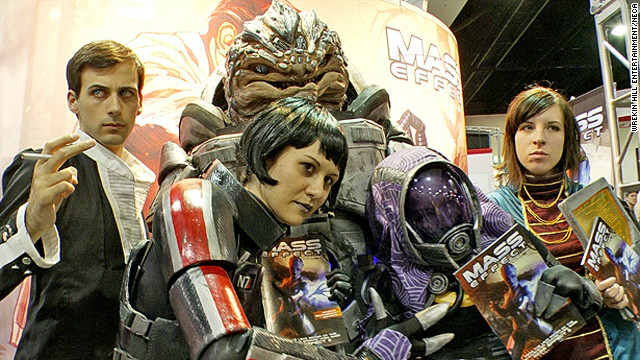 How exactly does one make a documentary about an event that attracts hundreds of thousands to San Diego, with dozens of events going on at one time?

"We had a 150-person crew over the course of filming," said director Morgan Spurlock ("Super Size Me"), who took on the challenge of shooting a movie about San Diego Comic-Con in 2010, his biggest film yet.

Lucky for him, geek icons Stan Lee, Joss Whedon and Ain't It Cool News' Harry Knowles soon signed on to produce the documentary, "Comic-Con Episode IV: A Fan's Hope." After an arduous casting process, Spurlock chose to follow several attendees, all of whom had a goal to accomplish at the convention.

“I love Anthony Calderon, racing to Comic-Con just to get the 18-inch Galactus he can only get at Comic-Con," Spurlock told CNN Geek Out. Another favorite of Spurlock's is Mile High Comics owner Chuck Rozanski, whose struggles to sell comic books at Comic-Con are chronicled in the film.

"(He) represents this crossroads of the old guard and the new guard. How do you remain relevant and parlay that into this next generation?" he said.

However, the thing that stood out the most to Spurlock was that Comic-Con also functioned as a "geek job fair." He followed artists Skip Harvey and Eric Hanson and costume designer Holly Conrad, who sought to break into the world of comics, film and gaming.

“Originally, you think (Comic-Con is) a geek shopping mall," Spurlock said. "There’s so much more going on, with the panels where people can go and learn about breaking into the business, to the portfolio reviews, where you can show your work and get hired to work on comic books, to and creating costumes for the masquerade, and people in the costume business could hire you to work in the costume department."

"I love that whole side of Comic-Con. I think 90% of the world has no idea that actually exists there," he said.

As for the mainstreaming of geek culture that Comic-Con represents to many, Spurlock – who says he now collects more comic books than ever thanks to digital comics – fully embraces this development.

"I loved what (director) Eli Roth said in the film: For years, we were told we can’t have these things. We’re not supposed to love them as adults. We realize we can love them as adults. The love may be different or things may change. You may actually have the ability to afford things (that) as a kid you couldn’t. You can be a productive member of a society and still be passionate about whatever thing it may be, whether it’s TV or film or a comic book. You can express that in a way that now isn’t deemed inappropriate or weird."

Conrad, who found paying gigs for her costuming skills since the movie was made, also spoke to CNN Geek Out:

CNN Geek Out: How did you get involved in this movie?

Conrad: (After sending my submission,) I posted an audition video to YouTube, which went viral and a lot of video game companies saw it. There were game developers sending all kinds of messages – I thought my e-mail had gotten hacked! Morgan called me and said we were the first group picked, so it was pretty awesome.

CNN Geek Out: Do you think the movie fights misconceptions about cosplay?

Conrad: If you have misconceptions, it will definitely show that we’re all normal people. We’re just fans. Someone can be a fan of football, and someone can be a fan of "Mass Effect" or "Star Wars" or anything else. It’s become more of an acceptable subculture. I think it’s becoming more acceptable for people to be in costumes. Everyone’s a fan of something, and I think the film really shows that to those who have not been involved in our nerdy culture that much.

CNN Geek Out: When did you first go to the Con?

Conrad: I’ve been going since 2003 or 2004. For a couple of years, I went normally and went in costume on the floor. I did the Masquerade two years before that. I had done contests at other cons like BlizzCon.

(The first year at the Masquerade,) we ended up making some abysmal steampunk-slash-"Dungeons & Dragons"-slash-papier-mache skit. That was a disaster. I wish that video existed somewhere. It has to, because it’s just so bad and hilarious. I’d love to see it again.

CNN Geek Out: How has Comic-Con changed since 2003?

Conrad: I definitely notice a difference, but I don’t think it’s necessarily a bad thing. I think it’s really exciting to see people that are into "Twilight" mingling with people into obscure factions of nerddom. It’s refreshing to see we’re all together and all fans. If you don’t like "Twilight," it will be gone in a few years. It’s the fact that we’re all there as a community that matters.

CNN Geek Out: What has happened since the movie and you and your friends' Masquerade performance as "Mass Effect" characters?

I got to work on a "Super Mario Bros." live action short. It’s gonna be released this summer, hopefully. I got to do production design. I designed all the monsters and suits. It was really fun.

I got a special thanks in the ("Mass Effect 3") credits, because we made the husks, the monsters for the live-action trailer – that made the final game, a cut scene, which was really cool.