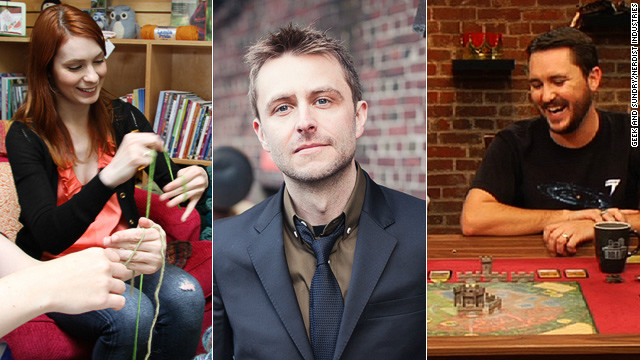 Geek celebs give up on TV, make YouTube even nerdier

While broadcast television continues to develop shows that revolve around nerdy characters, the actual nerds in Hollywood have turned their backs to the establishment.

Two of Los Angeles' geek community ringleaders, Chris Hardwick (one-time host of MTV's "Singled Out" but better-known for his "Nerdist" podcasts) and Felicia Day (of "Dollhouse," "Eureka," "Dr. Horrible" and "The Guild" fame), chose YouTube as the destination for their newest programming ventures.

Hoping to create entertainment hubs that appeal to geeks, nerds and other fans of niche programming, Hardwick launched the Nerdist Channel on Monday, and Day launched Geek & Sundry.

The Nerdist Channel's lineup, which includes "Face to Face With 'Weird Al' Yankovic," "Neil Patrick Harris’ Puppetopia," "Ain't It Cool With Harry Knowles" and "Weird S#!t from Japan," is an extension of the Nerdist brand and philosophy that began with Hardwick's website, and then podcast, in 2008.

He calls this cultural movement "nerdism," which is the advent of nerds that do not only voraciously consume any media having to do with gaming, science fiction or fantasy but who also create the media they want to consume.

"I realized there’s this ideology behind 'nerdism' that is the life blood of our pop culture. I wanted to start a website that was about something that was bigger than me but talked about the things I loved that was part of this movement that was already happening."

But by that token, while nerds have true passion for the ideas represented in current pop culture, show business at times can't get past giggling at the geeks.

"I'd like to believe that network television could do something like [the YouTube show 'Tabletop'] justice, but I'm not convinced that Hollywood is ready to do something like this that isn't all, 'LOL NERDS!' " Wil Wheaton said.

Wheaton, well-known to nerds for his turn as Wesley Crusher on "Star Trek: The Next Generation," and recently on shows such as "Eureka" and "The Big Bang Theory," launched "Tabletop" on Day's "Geek & Sundry" channel, on Monday. He describes the show, which he hosts and executive produces, as a sort of "Celebrity Poker Showdown" for role-playing games.

"One of my ulterior motives with 'Tabletop' is to show, by example, that getting together with friends to play a tabletop game like Dixit is just as normal and fun as getting together for a movie, or to watch the Sportsball Contest, or to play poker or even a game like Sorry or Yahtzee," he said.

"I want geeks who, like me, are in a mixed marriage with a muggle, to sit down with their spouse or partner and say, 'Watch! This is why I love to play these games!' "

Despite offers to do more extensive programming for television, Day chose to develop a YouTube channel because, "when I looked at the choice between [TV] and starting my own network, in a way, I just couldn’t pick the easier route," she said.

She saw the possibility to create a community online around the shows more enticing.

"I want people to take something away from it and have it educate and enrich them in some way." (Such is the core philosophy behind her video blog series, "Flog," which will find her learning a new skill every week and encouraging others to do the same.)

According to Veronica Belmont, one of Day's "Geek & Sundry" partners in crime, "We like to take the road less traveled, I think."

"We're not very used to depending on people to make stuff happen for us. Web video and podcasting have always been that way!"

"Passionate folks created thousands of newsgroups on Usenet in the early 1990s. This is the same impulse, but we just have better and better tools with which to do it," he said.

And this may be at the heart of what separates "The Nerdist" and "Geek & Sundry" from broadcast television shows jumping on the geek bandwagon. Hardwick is a firm supporter of the idea that nerds should and do evolve from the stereotypes that can come across in mass media.

"Digital culture has really helped to flourish the idea of creative nerds. The nerdist movement is less about consumers; there is a large contingent that are creative nerdists instead of consumers," Hardwick said.

Nerdist Industries CEO Peter Levin explained why he and Hardwick - already known to television viewers for his BBC America specials, his appearances on G4's "Attack of the Show" and his hosting gig on AMC's "Talking Dead" - decided to go to YouTube.

Even though cable TV is in the midst of a "'second golden age,'" according to Levin, "we really felt there is no home for the breadth of this type of content that we’d love to both see and produce" in the traditional broadcast landscape.

At the same time, Levin and Hardwick saw it as a chance to work with people they've always wanted to work with: “For guys like Chris and I, it’s a reality check when you wake up and realize you’re doing a show with [astrophysicist] Neil deGrasse Tyson."

Hardwick calls himself a "process nerd", obsessed with "the whole 'how-is-it-made' kind of thing."

“I identify myself as a nerd. My best friend, Wil Wheaton, identifies himself as a geek," he said. "[We're ultimately talking] about the same thing."

In fact, Hardwick will appear on "Tabletop," and he sees no competition with Geek & Sundry. Day agrees.

“There is a sense in Hollywood that other people’s successes are reflections on your failures and taking away from you. I don’t believe that at all. I try to help people a lot [on Twitter]. I’m really excited to help people find their passions like I did. If I can help someone else do that, that’s my mission.”

Day prefers to move past words such as "nerd" and "geek." You don't have to be a geek to enjoy the programming on "Geek & Sundry," she said (hence the "Sundry".)

"I think of it more as being niche content rather than purely 'geek' content," said Belmont. "We're serving very specialized, passionate (and often underserved) audiences on a number topics."

"I don’t think anybody adheres to a label very well," said Day. "I want people to know that, yes, if you’re a geek, you’re probably going to identify with all of these shows. Bottom line: nobody’s confined to these stereotypes. In order to expand who you are and embrace everybody – that’s why the community is so important to 'Geek & Sundry.'  "