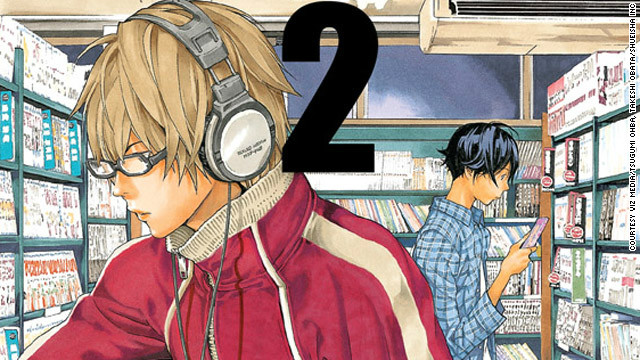 In preparation for this discussion, I dived in headfirst and read more than 1,000 pages of manga to get a better sense for its stylistic differences. Then, Bennett and I discussed production, pacing, storytelling diversity, themes, regulation of sex and violence, and the economic struggles of both industries.

First of all, it's important to know that manga and Western comics are produced quite differently. A great way for a Western comic book fan to learn about the manga industry is through “Bakuman,” a manga which provides extraordinary insight, as it’s a story about teenagers struggling to become manga creators.

Japanese culture has a lot to do with manga’s style. For instance, the pace of storytelling in manga is often much slower, with less action than in American comic books. “At heart, the Japanese are not in a hurry to tell a story," Bennett said.  "And while it may take patience to read it for an audience such as ours, usually the investment results in a gratifying payoff.”

While reading manga, I noticed there were many full-page spreads highlighting emotional reactions, instead of the traditional action spreads I’m used to. I also noticed a pattern of non sequitur panel transitions that sometimes made it difficult to follow what was happening. Panel layout in general was quite different from Western comics.

For instance, establishing shots, which I’m used to seeing at the start of a page to inform the reader of the current setting, were often placed at the bottom of a page in manga. Again, time orientation and cultural difference make the reading slightly unusual. This, however, can make for a fresh experience if you’ve been reading Western comics most of your life.

Of the manga I read, Naoki Urasawa’s “Pluto” struck me as having the most in common with Western storytelling. A lot of the story’s action happened off-panel, but its conflict and resolution built up at a pace I was accustomed to. While other manga had volatile characters yelling and emoting at each other in zany, slapstick scenes, “Pluto” was more subdued, without any of those tropes.

Thematically, both manga and Western comics seem comfortable exploring dark topics and concepts. Although American comics are primarily known for the superhero genre, they’re capable of telling a broad variety of stories. Manga is equally diverse, but I was surprised at some of the sex scenes, violence and scatology in the material I read.

“Velveteen & Mandala” was particularly jarring with really graphic rape scenes that seemed to have no context in the story. Osamu Tezuka’s “The Book of Human Insects” (which I loved) is over 40 years old and had some fairly risqué scenes for the era it was produced in. Even in “Chi’s Sweet Home,” which seemed like a children’s comic to me, I was surprised at how comfortable the creator was with scatological visuals. It would be easy for Americans to dismiss manga as being riddled with “tentacle porn,” but according to Bennett there are culturally specific reasons for this kind of material.

“Since Japan’s primary religious affiliations are Shinto and Buddhism and neither contains anything that connects sex to shame, the Japanese are much more comfortable exploring sexuality in general than Americans are,” Bennett said.

Given American comics’ long history with regulation, I asked Bennett about manga censorship in Japan. She said Japanese censorship laws were very strict for decades, but recently these laws have relaxed on all but one thing: the display of genitals and pubic hair. Regardless of this restriction, manga that might be considered lewd in America still has an audience in Japan, the fifth top-seller of pornographic materials in the world.

In North America however, when you compare sales of manga and other comics, manga is definitely selling less. Some speculate that the American economy’s recession combined with the closure of Borders bookstores contributed to this drop. According to Bennett however, in Japan, everyone reads manga.

“It’s not unusual to see an older man or woman on the subway reading manga in Japan,” she said. Because there are a wide variety of manga types out there, there is content for all Japanese, regardless of their age or gender.

That’s not the only diverse aspect of manga. Despite being created primarily in Japan (an ethnically monolithic country,) manga stories often feature protagonists from multiple ethnicities. For instance, in “Bakuman” one of the leads is blond. In “Chi’s Sweet Home” the entire family is Caucasian. Yet these characters are clearly supposed to be native to Japan. Bennett assumes this trend is because of “the Japanese fascination with anything that falls outside the norm of their own look.”

That could be one reason why many manga storylines are focused on providing the reader with a sort of behind-the-scenes look at unique careers or lifestyles that are especially rare in Japan.

“The Drops of God” is a comic all about wine tasting. Likewise, “Bakuman” tells the story of kids striving to be manga creators. Both fabricate competitive plots that make these insider stories compelling while revealing what these worlds are like. This plot formula reminds me of American reality television shows that focus on unusual skill-oriented contests, like fashion, cooking, special effects design or even drag queens.

Bennett explained this trend in manga is popular because “many people pursue run-of-the-mill careers in Japan and there is such tremendous expectation to secure a “good” job.”

“Having a unique career is simultaneously a fantasy and also something frowned upon,” she said, “especially if it is not financially productive.” Even though Japan as a society may have some of the strictest constructs in the world, manga explores these themes because as Bennett said, “people still yearn to dream.”

Despite the diverse ethnicity and career plots in manga, there still seems to be a preoccupation with manliness and masculinity. In several different books I read, characters either doubted their masculinity or constantly pronounced their confidence in being strong men.

Masculinity is a key topic in Japan, Bennett said, although it frequently goes unspoken - more of an assumption. “The anime community uses a slang word, “Gar”, to describe a character in an anime or manga as radiating a powerful, almost godly sense of masculinity,” she said, citing the character Kamina in the series “Gurren Lagann” is a classic example of this.

After a full submerging into the world of manga I have three gateway recommendations for Western comics fans looking to try out something different: “Pluto,” “7 Billion Needles,” and “Bakuman.” I now know where to begin and what kind of manga I enjoy.

I’m looking forward to reading even more. Do you have any good suggestions for beginners to Manga?