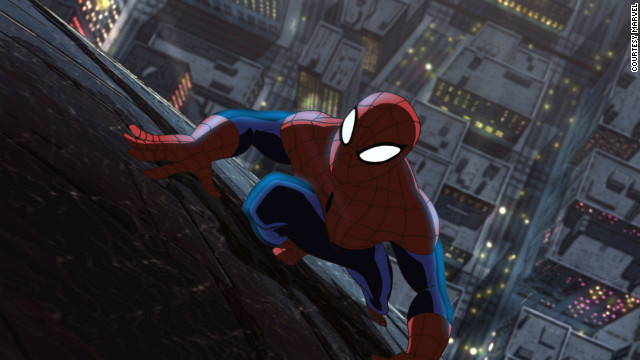 The character has had several cartoon incarnations over the past four decades, most recently in “The Spectacular Spider-Man” animated series that ran from 2008 to 2009. As in this summer’s feature film, Parker is in high school, but “Ultimate Spider-Man” doesn’t dwell on his origin story or his adjustment to becoming a superhero.

“Peter has been Spider-Man for a about a year and he’s doing a good job,” said Marvel Executive Vice President and Head of Television Jeph Loeb. “Abruptly, he gets introduced to Nick Fury, who is the director of S.H.I.E.L.D. Nick Fury comes to him and says, ‘If you really want to be the next Iron Man, the next Captain America … you’re going to have to step up your game. I will help you become the ultimate Spider-Man.”

The show incorporates plenty of Spider-Man’s trademark one-liners, plus abrupt shifts in animation style and fourth wall-breaking. Accompanying “Ultimate Spider-Man” and “The Avengers” in Marvel/Disney XD’s programming block are short video dossiers of other Marvel characters, an exploration of the technology required to make superheroics a reality, and a behind-the-scenes look at stunts, special effects and the artistic process of bringing characters to the screen.

Working on “Ultimate Spider-Man” is what Loeb referred to as a “murderer’s row” of animation writers, including Bendis, "Man of Action" producers/writers Joe Kelly, Joe Casey, Steven T. Seagle and Duncan Rouleau, and creative consultant/writer Paul Dini, who is most closely associated with Warner Bros./DC for his work on shows like “Batman: The Animated Series” and “Batman Beyond.”

“He’s so known for redefining the genre in many ways but had never worked for Marvel,” said Loeb of Dini, who was also a writer on the TV series “Lost.”

“I knew what a big Marvel geek he was, (but) no one had ever asked him before. We really wanted to put together a writing staff that had Marvel DNA in their blood.”

It’s particularly significant that Bendis is on board because he essentially rebooted and redefined the character to make him more accessible for new readers, and he has written well over 150 issues of the comic book. Marvel Chief Creative Officer Joe Quesada said that next to Stan Lee, Bendis is the writer most closely associated with the Spider-Man. (Speaking of Lee, he makes an appearance - naturally - as Stan the janitor.)

In the 2008 spoof film “Superhero Movie,” he played Rick Riker, a teenager who gains superpowers after being bitten by a genetically altered dragonfly during a school trip. Quesada said Bell brought the necessary comic chops to the part, as well as the ability to convey “the Peter Parker lot.” No matter how hard he tries to do the right thing, something eventually goes wrong.

“One of the things that makes him so iconic and so beloved all these decades is that Peter Parker is a character who is so relatable,” Quesada said. “We feel like either we could be Spider-Man, if we were bitten by a radioactive spider, or we know someone like him.”