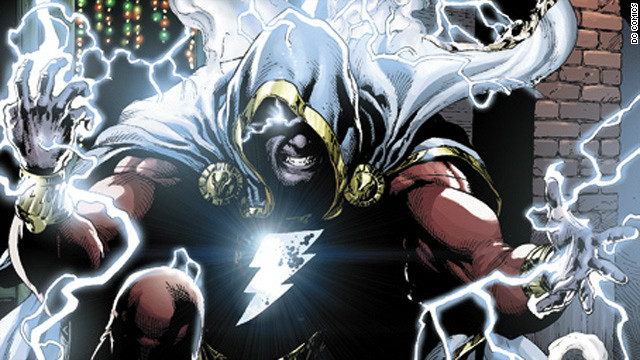 A superhero original gets a major makeover (and a name change)

With Wednesday's release of "Justice League" #7, the character known since 1941 as Captain Marvel will officially go by the name "Shazam" - a name which many of the uninitiated might have thought was his name for decades.

According to DC Comics' Chief Creative Officer Geoff Johns, who had a big hand in the recent relaunch of DC Comics characters with "The New 52,", told the New York Post that the name change made sense for a number of reasons, including that, "Shazam is the word most associated with the character." (DC Comics is owned by Time Warner, which also owns CNN.)

Gone also is the white collar on his cape, which is now more of a cowl, and the famous lightning bolt on his chest now glows.

"His place in the world will be far more rooted in fantasy and magic than it ever was before," Johns told the Post.

"This will be a complete revamping of the character, all the way back to his origins with new powers, and what I’m sure will be changes to his family of supporting characters," said John Barringer of A Comic Book Blog. "This could potentially be one of the biggest changes for a character as a result of the New 52."

The change in Shazam's appearance is potentially significant, as it makes him look a good deal less like Superman than before. In one of the most legendary court cases in comic book history, DC successfully won a lawsuit in 1953 with Captain Marvel's creator, Fawcett Comics, due to those similarities with one of their most popular characters. (At one point in the 1940s, Captain Marvel comics were outselling Superman).

"Captain Marvel was the first character that really refined the superhero formula," said Chris Sims, a senior writer for Comics Alliance. "He's the ultimate wish-fulfillment character. Every kid wants to be a grown-up and be big and strong and have the ability to get whatever they want, and Billy Batson is exactly that. He says a magic word and he doesn't just get super-powers, he turns into an adult that can fly around having all the adventures that kids want to have. And that's what made him a hit."

DC bought Captain Marvel back in the 1970s, but legally could not title any comic books "Captain Marvel," instead calling them "Shazam!" (named after the word young Billy would say to transform into Captain Marvel, as well as the wizard who first gave him his powers). Even the two Saturday morning TV series from that era were called "Shazam."

(Marvel Comics, on the other hand, is under no such restriction, and, for its part, DC's rival company announced the relaunch of their own version of a character named "Captain Marvel" – originally introduced in 1967 – this past weekend at Wondercon.)

DC once again relaunched the character several times from the 1990s until recent years, to varying levels of success.

So, why is this reboot raising eyebrows among some comic book fans?

"He's a sort of comic book relic, who’s eroded less through the years than others and keeps a part of that simpler time intact," said Barringer. "So as you can imagine, any adjustments to the character are carefully watched."

Sims said he has seen a very mixed reaction to this reboot from fans. "I've seen people calling Geoff Johns out for changing the name because he's 'not a true fan,'" he said, adding that there may be "some truth" to the idea that it's a way of DC getting around the legality of using "Captain Marvel."

"Other people are pretty optimistic about it, having Captain Marvel back in such a high-profile book."

Sims said he thinks critics are more upset about the costume change than about the name: "Captain Marvel was originally styled as a big, fun character that was as much a sort of Looney Tunes-style cartoon as he was a superhero," he said.

"There's a great story where his arch-enemy Dr. Sivana tries to blow him up with 'a billion tons of dynamite' and he just sort of flies up in the air like Wile E. Coyote. But since mainstream super-hero comics, and DC in particular, have spent the last 30 years trying to move away from that sense of fun and towards more 'serious' adventures, that doesn't really fit. So from the looks at least, he seems like he's been slightly redesigned to be more menacing."

Barringer believes, despite any uproar over the name and costume changes, that most fans are excited by a character getting reinvented, even if they won't admit it. "Shazam has all the characteristics of being a great classic superhero and his close ties to magic and supporting characters that make up the 'Marvel Family' open the spectrum even wider for all sorts of possibilities. I think the biggest concern is that comics seem to lose a bit of the original characters with every revision they go through, and it’d be a shame to see such a classy and classical character like Shazam deteriorate, even if a little."

Despite any misgivings, the fact that Geoff Johns has breathed new life into Green Lantern and, more recently, Aquaman, means that hardcore comic book readers will likely pick up "Justice League" out of curiosity to see what he has done with Shazam.

"Johns is one of the top creators in comics, if not the top writer, and 'Justice League' is the best-selling comic on the stands right now, and it's the one DC's pushing to get into the hands of the people who weren't necessarily reading comics before," said Sims. "His involvement means that this is a high-profile story, and that for a lot of readers it's going to be the first time they've seen Captain Marvel/Shazam in a long time, and for some it'll be their first exposure to the character. For them, this will be their definitive version of him, at least until the next big change."

As Barringer put it, "[Johns] has a clever way of combing a character's history over into a fresh take, adapting new ideas out of old ones. I’d imagine there is no holds barred for his vision. We’ll have to wait and see if lighting strikes again though."