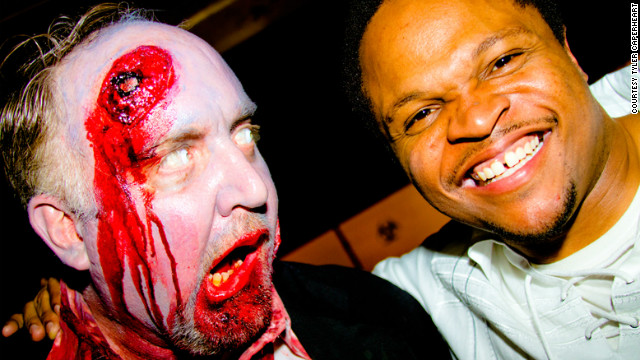 Singleton admitted that he had recently gotten a taste of fan interaction for the first time at the Run For Your Lives race (an amazing zombie-infested 5K) which was held just outside Atlanta earlier this month.

"I knew they were going nuts on Twitter and Facebook, but once I was out there and immersed in it – I saw what this whole phenomena has been like for the rest of the cast members," Singleton said.

Multiple zombie extras from the show were also in attendance including Rodney Hall, Pat Britton and Tony Gowell, as well as some of the show's crew, including camera operator Matthew McGinn.

When 9 p.m. rolled around, everyone took their seats and soon fan commentary was in no shortage. They had it covered with everything from driving advice to relationship advice, and Singleton couldn't help but smile as people hollered every time they caught a glimpse of T-Dog.

It was that love from fans that Singleton admitted has actually helped him feel less surprised that T-Dog hasn't bitten the dust yet... or been bitten.

"Early on I was very surprised that I survived, but not as much lately because my Twitter followers and Facebook fans are incredible."

"They've been showing T-Dog so much love – to where I'm thinking writers are like, 'Damn, we didn't know T-Dog had this much love!' So now that they're actually seeing that, maybe they feel that they have to respect that," Singleton said.

As the episode drew to a close, fans were introduced to a new character, Michonne, a fan favorite from the comic book series. Between this scene and the very final scene that panned up from the survivors, the loudest roars of the evening were heard. Teasers for what lies ahead in season three had everyone talking and approaching Singleton.

Singleton promised fans a cataclysmic finale - going so far as to say that the episode may go down as one of the best hours in television history. Fans were certainly expressing similar views as the credits rolled, making it clear that they couldn't wait for season three.

While the show won't be back until later this year, fans can catch "The Walking Dead" cast members at numerous conventions until then including Texas Frightmare in Dallas in May, when it will host host Singleton, Chandler Riggs and Madison Lintz.