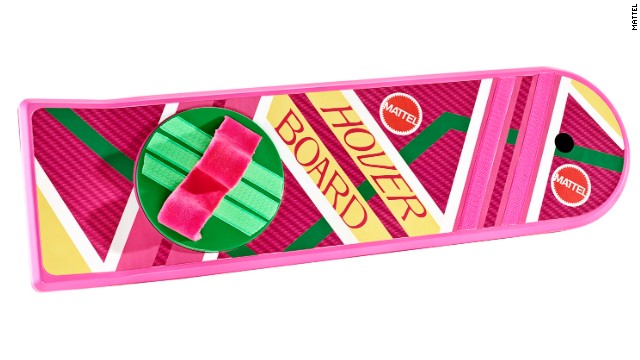 CNN Geek Out spoke to Stephen Clark, creative director for the site, and a few of his compatriots, all of whom are placing orders for hoverboards, anxiously awaiting their arrival in November.

CNN Geek Out: How significant is the hoverboard to "Back to the Future" fandom?

Clark: Hoverboards are simply a core representation of what makes sci-fi fans connect with movies in general. They're a fictional gadget seen on the silver screen that have also become a tangible item which fans can put on display at home or in their office cubicle. "Star Wars" fans gravitate towards light sabres and Stormtrooper helmets. "Star Trek" fans have phasers and tricorders. Now "Back to the Future" fans can finally have hoverboards!

Oliver Holler, ToTheFuture.org: The dream of flight is universal. When it comes in the form of an everyday consumer product that even a child can enjoy, we feel the future has arrived!

CNN Geek Out: Are hoverboards the most sought-after item?

Todd Ross: For me personally, the hoverboard has been the No. 2 item from the movies on my wish list, only coming in second to a full-size DeLorean time machine replica. Since that item is likely too costly for most, the pink Mattel board has to be the one of the most unusual items that's priced within almost many people's grasp. Other iconic items like the Flux Capacitor have been released as well, but nothing as immediately recognizable as the hoverboard.

Clark: I've been asked about the availability of hoverboards almost daily since beginning BTTF.com in 1992.

CNN Geek Out: Why do fans want a piece of these particular movies?

Clark: It goes back to owning something that reflects their childhood in a positive light. I mean, who out there didn't want to be Michael J. Fox traveling through time in a souped-up DeLorean, riding on a hoverboard, wearing self-laced Nikes, and getting rich from sports statistics? DeLorean automobile owners frequently use the quote, "Living the Dream," and that motto certainly extends to "Back to the Future" fans as well.

CNN Geek Out: How big a role did fans play in getting these items out into the real world?

Ross: After the trilogy itself completed, the franchise could have easily fallen into a nice spot in film history. However, in the days before the Internet, the "Back to the Future" magazine fan club kept the films alive. As a kid, I thought I was the only one who was obsessed with the three films (and my family and friends likely thought the same), but in the mid-'90s the fan club migrated online and I realized I was just one of thousands of fans out there. Stephen Clark, through his BTTF.com site, has maintained a place where not only fans can come together, but has also become the place fans rely on and trust for their "Back to the Future" news. It's cool that even 27 years after the first movie's release, there's still plenty to talk about!

CNN Geek Out: What do you plan to use your hoverboard for?

Clark: Ideally, I'll probably have my friends over at ScreenUsed.com create me a professional display case to house a hoverboard to go with my size 9 Nike Mags and my 2015 Holographic Cap for my office. These items always make for great conversation pieces.

Ross: If I was still a 10-year-old kid, I'd probably shut my bedroom door and pretend to ride the Hoverboard all over my room! But as an adult, I will simply display it in my home office ... but when the door is closed, I just might have to hop on it once or twice to see what it's like!