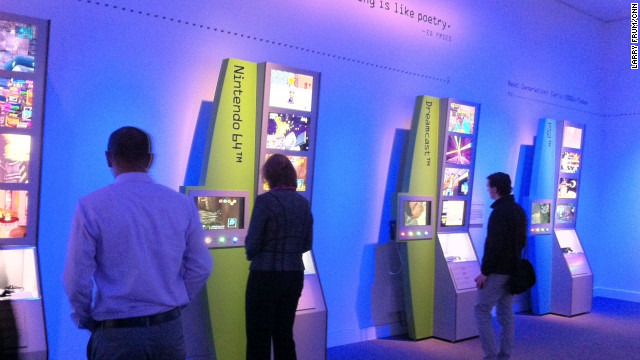 “I thought it was amazing,” said Jimmy, a 21-year-old from southern Maryland. “I thought it showed the great history and beauty of video games. People will be able to come to the Smithsonian and still learn about video games and see the beauty in them.”

Jimmy’s mother, Barbara, wasn’t surprised to see video games being represented in the Smithsonian American Art Museum. She doesn’t play, she said, but she has five kids who all played, and the exhibit's images reminded her of times when her children were young.

“We got our first Nintendo when (Jimmy) was 6 months old as a family gift,” she said. “The old stuff has an artistic feel to it when you look at where games are now. It brings back a lot of memories for me about when my kids were growing up.”

Some people thought recognition of video games as art was overdue. Brian, a 19-year-old from Pittsburgh who has designed some personal video games, thought “The Art of Video Games” exhibit is a good first step for the Smithsonian but said there needed to be more.

“I’m surprised it has taken 30 years for video games to be recognized,” he said. “This is a good first step and has a feeling of nostalgia. I would have like to have seen more about the pioneers of video gaming.”

His father, John, agreed and said he was a little disappointed the exhibit had such a narrow focus.

“Where are the tributes to the artists? What about the guys who have done the work?” John asked. “I would have like to have seen more about the work behind the scenes.”

Guest curator Chris Melissinos hopes people from across the U.S. come out to see what video games are and what they have become.

“My hope is that people will leave the exhibition with an understanding that video games are so much more than what they first thought,” Melissinos said. “They may even be art.”