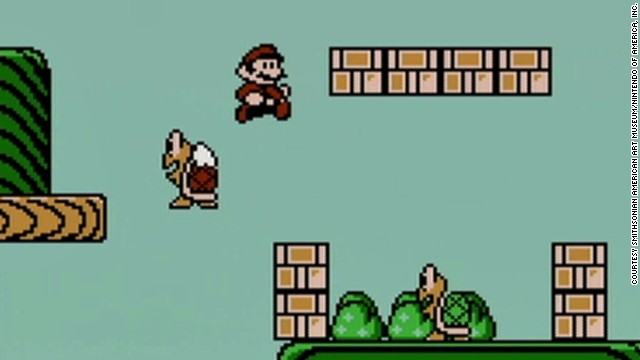 Leveling-up at the Smithsonian

"The goal is not for us to put a stake in the ground and say ART!" said former Sun Microsystems chief gaming officer and Past Pixels founder Chris Melissinos.

And yet, Melissinos is the guest curator for the Smithsonian American Museum of Art's newest exhibit, "The Art of Video Games." That's right. Video games are now included in the leading art museum in the nation. What else could this mean but ART?

How about legitimacy for an entire generation of gamers who grew up playing 8bit games and weren't taken seriously by the rest of mainstream culture?

"It was intentional," Melissinos said. The medium of video games, after 40 years, is "worthy of examination as an art form," he said. It is also the first reflection of nerd culture within a museum that, Melissinos said, is arguably one of the arbiters of what is art  in the world.  The weight of the Smithsonian's stamp of approval not only starts a cultural dialogue about whether "Pitfall!" is art, but also what devotion to video games actually means.

The enjoyment nerds got from video games led them to "willfully devote part of our culture, part of our identity to games," he said, "but doesn't mean that there was no one else in the general population who could find meaning in these games."

Melissinos, who programmed his first computer game when he was 12 ("It was bombastic! it was awesome, of course," he said.) pointed out that playing games has been a part of human nature since we first started forming civilizations. And while games are tools that people use to establish social order, discover our world, make friends and explore boundaries, nerds have had a very specific relationship with video games, he said.

"When we created computers (and video games) we did something that is completely against the entire instinctual evolution of our species," Melissinos said. "We told people it was OK to play alone."

"Think about that for a minute. For all of mankind's existence on this planet, gameplay demanded the interaction between people. And for a very brief eyeblink of a moment in time, we told people that computers could act as a surrogate. Could act as a faux human to play against."

It was nerds, Melissinos said, who felt like this kind of gameplay was exactly what the future held for mankind.

There's also the projections of aspirations and dreams that many young gamers felt was an integral part of the medium.

"When you're 12, you have no control over your life," Melissinos said. "You are told what your bedtime is, you're told what you're having for dinner, you're told what kind of clothing you're allowed to buy, when your homework is due. You have all of the control about your life delivered to you by your parents, your school, these sorts of things," he said.

"But inside the computer I could be whatever I wanted to be. I could create stories and worlds and experiences that would bend to my will. That allowed me a voice. To someone who is powerless, power of this sort is an astonishing gift."

Indeed, the director of the Smithsonian American Art Museum, Elizabeth Broun, called the worlds created in video games "beguiling," recognizing game designers as artists. But this exhibit doesn't exist solely because video games look pretty (although there is a companion picture book to the exhibit called "The Art of Video Games: From Pac-Man to Mass Effect.")

An interactive exhibit of video game art in the Smithsonian also functions as an artifact of gamer culture and reflects a truly unique ability of theirs, Melissinos said.

For example, if after humans are gone ("the zombie apocalypse?" Melissinos asks) aliens came down to the planet and found this video game art exhibit, they would learn that video gamers were trying to uncover intangible truisms about their world, he said.

"When we consider 'Super Mario Brothers' and discover a hidden block that is in midair - knowing that there are no hidden blocks within our air here - we are trying to find what it is hidden behind what we see and do," Melissinos said. "Many of the games we play try to tease the unexpected, the unexplored things that have not yet been revealed about our world."

Video games do this through a combination of perspectives: that of the designer, the tangible environment of the game while it's being played and the interaction of the player. Melissinos organized the exhibit so that the evolution of video game art over time was juxtaposed with the constant, inherited mechanics of gameplay.

"This is not designed to be an exhaustive compendium of the history of games," he said. "It is an art exhibition."

The intent of the game designer, the visual aspects of the game, the music, the environment and the game story all conspire to present the player with an experience, but video games do not become art until the player gets involved, Melissinos said.

"The Art of Video Games" will be at the Smithsonian Art Museum in Washington until September 30, 2012, and touring the country after that.