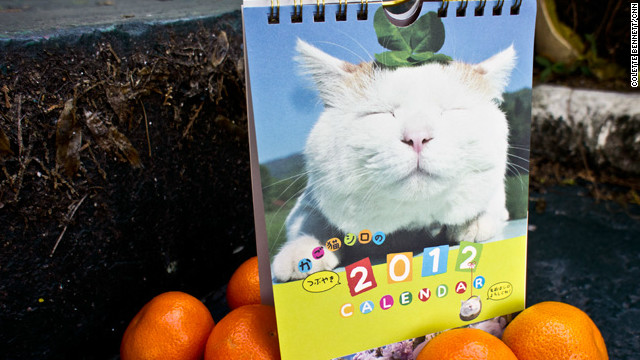 The animal celebs of Japan: Maru, Otousan, Shironeko and more

America is no stranger to cute animal culture. Memes featuring lolcats have been popular since 2006, Cute Overload spearheaded the cute animal blog movement in a huge way years back, and a cleverly shaved Pomeranian named Boo has more than 3 million fans on Facebook.

Clearly, people really enjoy animals, and the way they have been idolized as a part of Internet culture comes across loud and clear. Simply put, an animal brings a smile to the face of most, and it's hard to wear a frown when you're watching a baby lemur happily hold up his arms for a massage.

Leave it to Japan to take something like cute animal culture and put a new spin on it. And the animal celebrities of Japan are quite distinctive.

Shironeko and his cat family are not new to the Internet (English websites have called him "basket cat" because of his propensity for sleeping in baskets), but they are something of a phenomenon. With 540 YouTube videos, a blog and even a Twitter account, it's apparent that Shironeko and his family members have major presence when it comes to Japanese fans.

Each day, a new video is uploaded of one or several of the cats, although Shiro is featured predominantly. The most popular videos in the series show the cats sitting calmly as their owner stacks fruit on them, dresses them in empty ramen bowls and more. It's kind of like the Japanese version of Stuff on My Cat, but more bizarre.

Shironeko may have 26,000 YouTube subscribers, but that's small potatoes compared with Maru, a Scottish Fold who has become so famous that the book about him has been translated into English and published by Harper Collins. Maru has calendars, his own iPhone app and a YouTube channel that boasts 1,195,753 subscribers. Much like Shironeko, these videos feature Maru doing normal cat things such as getting trapped in boxes, attacking the mirror and doing lots of sleeping.

The obsession extends to parody, such as the band NKB48, a riff on the popular female pop group AKB48. All the members of NKB48 are cats.

Cats are not the only popular animals, though.

Japanese telecommunications business Softbank is well known for its popular commercial series starring the white dog Otousan. And the "actor" who plays him, Kaikun, has his own series of books depicting him exploring Japan.

The history of Japan's adoration for animals is a long one. Perhaps the most well-known four-legged hero in modern Japanese society was Hachiko the Akita. Hachiko faithfully accompanied his master to and from the train station every morning and evening when he went to work. When his master died at work in the 1920s of a cerebral hemorrhage, Hachiko continued to wait for him at the train station for nine years.

The Japanese consider Hachiko a paragon of loyalty and honored his memory with a statue at Shibuya Station in Tokyo and a yearly gathering.

Is the root of the Japanese love for animals about loyalty, cuteness or both?

"Cute animals are definitely a universal subject of Internet culture, but I think there is a different kind of charm that comes with animal photo blogs, which are far more prevalent in Japan, " said Brad Kim, editor of the Internet joke database website Know Your Meme.

"In comparison to the many 'one-hit wonders' of viral cat videos on YouTube, I think the blog format adds many layers of character to the animal, with a new obstacle or an adventure each day. From Oolong the Pancake Bunny in the '90s to the more recent Maru, Hatch-Chan and Shiro, animal blogs run by pet owners have grown into a staple genre of Japanese blogging culture."

Kim also says that the popularity of blog ranking sites (such as this one, which ranks cat blogs) helps create an environment receptive to animal fandom. This explains so much of the draw for the Japanese, but do American otaku obsessively watch the animal blogs for the same reasons?

Hardcore Japanese animal video fan Stella Wong says that watching these videos gives her a sense of comfort and joy.

"Watching these videos make me feel a sense of pure happiness that a real animal in your home can give you. For someone who’s not allowed to have pets in their household, this is a simple comfort for me. Animals have a way to lure your heart and soul into their lives."

Since the owners of many Japanese animals like to upload videos of them every day, Wong says, it gives her a sense of being included in their lives. "There’s always a new owner with a cat or a dog to just film whatever they do that’s just normal for them every day. I feel like I’m being invited to someone’s house to watch over their pet."

Do you have a favorite Japanese animal blog?